Like probably almost everyone, I write a lot of to-do lists. But unlike most people I have a blog that is a ravening content eater. It demands at least a thousand words of fresh content every damn day. If I feed it a thousand original words at the requisite daily tempo I am rewarded with visitors. Google smiles upon my blog and sends eyeballs to me from the depths of the Interwebs, but if I do not, this stream of buy-happy internet surfers for whom nothing brings more pleasure than reading a top ten of sci-fi ground vehicles or a review of a comic book published a couple of decades before the turn of the millennium, will dry up. I need these people to keep visiting my site because some of them are so hungry for sci-fi that they sometimes follow one of the ads that I sprinkle throughout the content on this blog like chocolate chips in a cookie, and maybe they then even buy a copy of one of my books from Amazon or one of their competitors. Here is just such an advertisement.


Okay, I thought to myself, why don’t I turn my to-do lists into content? It sounds a little desperate, a little crazy, but hell, when did that ever disqualify anything from being a prime candidate for internet content? Never, that's when! (Just in case it wasn’t obvious that that was a rhetorical question.)

So, to turn this cockamamie idea into reality, without further ado – by the way don’t you just hate the way Google liking articles of more than a thousand words makes everybody on the Internet write so long-windedly these days? – at last, here in its entirety is the new To-Do section of my blog. No wait, that’s not a very ‘can do’ title. I think I need something a little more proactive and 'go-getting' so here is the new Coming Soon section of my blog. That’s better. 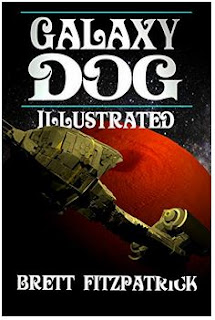 One - Sun Chaser Illustrated
First off, since last year I have been producing illustrated versions of my novels. Yes, I can write and draw, and in fact I started drawing sci-fi spaceships, robots and the like before I started writing about them. I also remember my teenage years, when I was consuming more sci-fi novels than ever before or since, and how much I loved editions of books with illustrations in them. These tended to be aged classics by Jules Verne or super modern schlock like the Battletech series of giant robot war novels. These were based on a role-playing game that was based on cartoons that were imports of anime, that were in turn based on original manga stories. As you might expect, based on that tortured creative pipeline, the stories themselves were never going to become beloved classics like the Jules Vern novels, even if in my mind they were filed together in my brain space, just because both were illustrated, and those giant robot drawings were awesome.
Anyway, there are already two books in my range of illustrated sci-fi, which are Galaxy Dog Illustrated and Iron Dart Illustrated. The third book is being put together as I write this, and should be pretty much ready to drop as soon as I have finished the cover illustration, and so it is the project most likely to appear first. Watch this space, for there will be further announcements about the impending arrival of Sun Chaser Illustrated - for that is its name.

Two - Silver Star
I am slowly writing my way into an ongoing series of sci-fi novels – the very series that the illustrated editions I talk about above are taken from – and I am still enjoying it enormously. By now, the setting of the book (The Tarazet Star Empire) is evolving organically and the main characters of the book, Altia and Knave, are also becoming three-dimensional beings whose adventures unfold logically from their wants and needs. As an author, all I have to do is go along for the ride, get it all down on paper (figuratively, obviously I use a word processor not a pen or typewriter), put a pretty cover on, and upload the file to Amazon, Apple Books, and all the other places people go for cutting edge, woke, sci-fi with an old-school British sensibility. Yeah, that’s my jam, and the next installment is coming (relatively) soon. Full disclosure, it’s only about a quarter the way written, but it is going swiftly and well.

Three - Pre-orders of Silver Star
Most content channels, such as Amazon, Apple Books, and all the rest, allow you to set up a pre-order process for upcoming new books. As soon as I am confident about the date I am going to be able to deliver Silver Stat, I will set up a pre-order. Right now I'm thinking it will be early in 2020, so the option to pre-order should be online, with the first render of a provisional cover, very, very soon. I think I'm going to be setting that up some time in mid November.

Four - The German Edition of Galaxy Dog
This one is very much a long-term project and may turn out to be just vaporware, but I have some tangential involvement in the German language book market – I’m part of a team creating German translations of books – and I know that there are a lot of German, Australian, Swiss etc. sci-fi fans, and I want my books available to them.

Six - German Distribution for Galaxy Dog
I may not have German translations of my book yet but, purely as an experiment, I did make one of my books available to the German market in English. The book is Forever Young, a Gothic horror ripsnorter written in collaboration with Barbara Stanzl. It has been ten years in the writing and it’s a real jewel. Anyway, unlike in the English language book market, I could not find a book aggregator who was offering their services for free, so I paid nineteen dollars for a year of distribution, and I have already made the money back, and a little bit more, so I count that a resounding success. Galaxy Dog, the most popular of my books will be next.

Well, that’s all the news I can think of for now, and I'm very pleased with my coming soon page. It was a relatively painless way to generate a thousand words or so of content and feed the ravening beast that is my blog for another day – so one more thing I can say with some confidence will be coming soon is another coming soon page. I will see you all then, or what few of you Google has seen fit to send my way.

To end, just a reminder that the best way to support this blog is to buy one of my books. Simply go over to Amazon, or Kobo and get one.
Labels: Coming Soon