The X-Men franchise has been a very mixed bag over the years, and if anything it has more often been shading toward toward bad. I keep seeing these movies because I am a sucker for sci-fi and superheroes, and because I have a particular soft spot for the X-Men thanks to my time reading it religiously back in the strange days of the 90s. I remember Cable and Bishop being introduced, and liking it all even as I was aware it was objectively not good. That's how I consume the movies, too. I enjoy them, even though I know they are not usually objectively good. Some are good, sure, but most are a mix of good and bad, as I aid, leaning heavily on the bad. 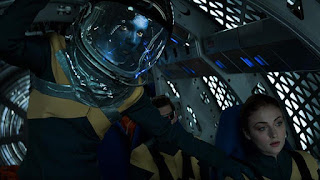 This movie is absolutely one of the mixed ones, but does it shade toward good or bad? There is bad stuff, but even when this movie is being stupid and boring it also has cool stuff in it. For example, the Blackbird emerges from below a basketball court and blasts off into space. It doesn't get more comic-book than that. The rescue they do in space, however, is weirdly dull, even with some entertaining Quicksilver stuff thrown in. 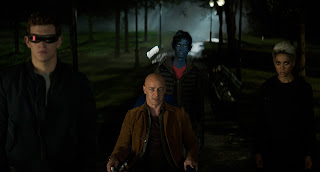 Then Jean gets blasted by dark energy, something preordained and lacking in sting for anyone who knows anything about X-Men history, but getting blasted leaves her floating in space, which is nicely filmed, calling back to a hospital scene set up nicely just minutes before. But then, on the other hand, to give Cyclops something to do in space, the writer gives him a weird belly turret he can sit in to use his eye ray to power a laser canon. That’s just stupid.

Then again, the movie looks great. I especially like the short opening in 1975, but the modern stuff looks good, too. However, even though everything looks great, the costumes chosen for the X-Men are among the most boring ever designed for them. They look like they are cosplaying a Star Trek Next Generation away team. It is all just such a mixed bag, but the first half is mostly positive, despite numerous missteps.

Watching the first half, I was surprised that Raven was leading the team rather than Storm or Cyclops, and also surprised at how subversive she was being. There is a scene where Raven accuses Professor X of forcing the team to take risks because of his ego, which is so out of character for Professor X it made me snort at how bad the writing was, but then Raven makes a good point about how the team shouldn't be called the X-Men because the women are always saving everyone's asses. The writing is all over the place in this movie, as mixed as all the other elements. 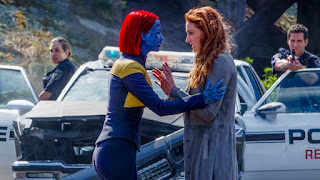 The writing is lacking for example when Jean starts to feel the dark force within her, it is not subtle, not at all. She acts like she's on coke, which is probably the writer's idea of what power feels like. Dazzler is in the movie too, but only for about a second, and her 70s Disco look is so cool it is a crime to waste this character in such a tiny cameo. 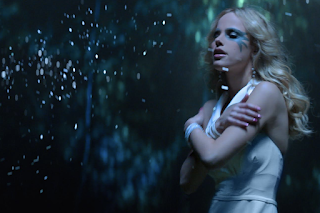 Some of the bum notes are not the writer’s fault, for example the president of the USA is depicted here, as usual, as a respectable figure with gravitas, rather than the orange corruption machine actually occupying the White House, and that is jarring. 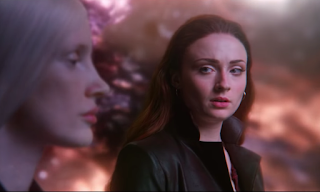 Then a bunch of creepy, horror-style aliens are introduced, and they feel like they have wandered in from the wrong movie, but at least all the chips are now on the board. I don't like that comic book movies often take too long setting events in motion, but this movie has all its ducks in a row by the end of the first reel, and I was about to applaud that, at least, when things went completely off the rails. 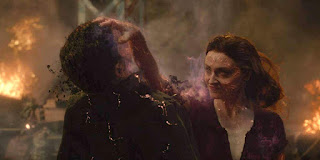 The pivotal moment is reached where Jean finds out that Professor X has been lying to her about her father. He told her her pops was dead but she discovers that’s not true, and when she goes to see him she finds a mutant hating old man who blames her for the death of his wife. She loses it and there is then a great fight in a suburban street, where the special effects are understated and effective. So far so good, the movie is really starting to cook, but the encounter ends with Raven getting brutally fridged by Jean. What the f...? I thought. I had hoped comic book movies were beyond pulling this kind of sh*t.

I would say that the mix of good and bad up to this point in the movie comes out about even, but this is where it takes a turn and goes bad. No amount of good special effects in a little superhero battle is going to make up for a stupid fridging at the end of it. Raven is an important character and this should not be happening to her. When I saw this fridging, I knew I would be advising that this movie was absolutely okay to skip for people who are not hard-core comic book fans like me. It is impossible to recommend a movie containing such bad, old-fashioned, and misogynistic writing.

The scenes following the fridging are then interminable. The X-Men mope around and blame each other for Raven's death instead of getting on with an entertaining movie. There is a scene between Beast and Xavier in a rainy kitchen that is well acted but is only a reaction to the fridging. It doesn’t actually advance the plot. The movie stops dead, all momentum gone.

So, why kill Raven, you might be wondering. Usually a fridging is to supply cheap motivation for a male character. Well, Jean or Dark Phoenix as she has now become, immediately goes to what looks like a hippy commune, which turns out to he run by Magneto. It turns she wants to ask for advice on not being evil, even though she has only been evil for one afternoon of movie time. It is an entirely unearned interaction, but it is a hint of who the fridging motivation is going to empower. Magneto asks whose blood Dark Phoenix has on her shirt, just to hammer home the point.

She doesn't answer but some military turn up and Dark Phoenix again goes a bit bananas. Magneto tries to calm her down and realizes she is more powerful than him and he doesn't like it. He tells her there is no place for her in his hippy commune and she is banished.

Hank tells Magneto that Jean killed Raven, and to avenge her they instantly team up, along with Magneto’s team of mutants, to kill Dark Phoenix. Xavier and his X-Men have to turn up to stop them, so at least the movie shows signs then of coming back to life. There is the mandatory face off between Magneto and Xavier but the writer doesn’t have the ability to make this ring true, and their interaction degenerates into Wrestler's smack talk.

Then there is a pleasingly big battle but it is not written well. Storm has trouble with some guy with prehensile dreads, for example, and Magneto defends himself from Cyclops’ eye beam with some aluminum siding. At the end the X-Men are easily captured by ordinary soldiers with taser guns. Almost every character goes up in power level and then down, then up again, as the plot demands. It’s not only confusing, it’s annoying. Storm is one of the most powerful X-Men and in this movie she is almost inconsequential, except in one scene where her power gets dialed up to eleven to take out a train full of adversaries, before being nerfed again. Showing Storm as anything other than awesomely powerful is not okay with me.

The movie then degenerates into incoherent action, with just enough time for another fridging, this time of Magneto's cool female accomplice. It ends with the horror-movie aliens going full fast zombie, and then everything is made indistinct by a bunch of incomprehensible CGI.

There is then a very brief epilogue where we are assured Dark Phoenix is still alive and Magneto has a chess game in France with Xavier for... reasons? Then proudly Simon Kinberg's name comes up at the end as both writer and director, and it is good of him to take the blame for this. Once again the potential of the X-Men is wasted on sub-B-movie stupidity.

It is objectively far from a good movie, but did I enjoy it? Yes I did. That does not mean anyone but a comic book nerd like me should subject themselves to it. It is not great.

To end, just a reminder that the best way to support this blog is to buy one of my books. Simply go over to Amazon, or Kobo and get one.
Labels: sci-fi movie