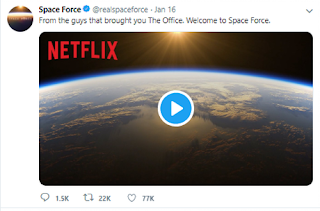 I was listening to one of my favorite podcasts on the bus today and I heard some interesting, sci-fi related news. At lest I thought it was sci-fi related. The show I was listening to is called Yo, Is This Racist? And it stars Andrew Ti and Tawny Newsome. Every Wednesday the two hosts and their guests answer questions from fan-submitted voicemails about whether or not something is, in fact, racist. It’s a great show, but it is rare to hear any sci-fi news on it. This time however I found out about a new show starting production for Netflix, a show called Space Force. 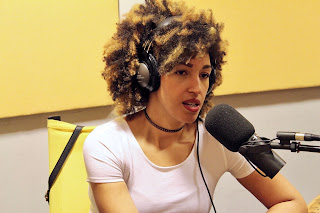 The reason Andrew and Tawny were talking about Space Force is that Tawny has landed a starring role on it. She will be appearing with John Malkovich (she says her parking space is right next to his), Ben Schwartz (who voices Sonic in Paramount’s upcoming Sonic the Hedgehog movie), Diana Silvers, and last but not least, Steve Carell.


I have billed this post as sci-fi news, and based on the name that’s what I thought it was. I assumed a show called Space Force would be about some kind of... welll... Force based in Space, but apparently I was wrong. The show is actually going to be Netflix’s new workplace comedy. It is intended as a vehicle for Carell, the former star of the Office and is being created by that show’s developer, Greg Daniels. Space Force is therefore not going to be space opera the name might suggest, but instead is Carell’s return to workplace comedy almost a decade after The Office. The pilot started production just a few days ago with the 10-episode series set to premiere next year.

The show seems to be inspired by President Donald Trump’s Space Force initiative, though unlike Trump’s Space Force, the new show is a real thing that looks like it is actually going to happen. Carell is the star, obviously, and will be portraying Mark Naird, a General leading this new branch of the Armed Forces tasked with putting American “Boots on the Moon” by 2024. Malkovich plays arrogant Dr. Adrian Mallory, and Newsome’s role is Angela Ali, a helicopter pilot with secret dreams, whatever that means. I must admit that I am getting Powerless vibes from this concept and I do not expect it to be good. 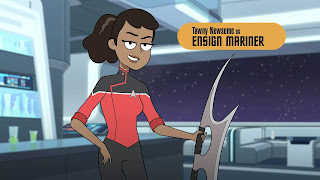 Space Force might not be true sci-fi but Star Trek: Lower Decks certainly is, and Newsome is also slated to appear in that. Well, at least her voice is. It is an upcoming animated web television series, created for CBS All Access. It is centered round the support crew of one of Starfleet's least important starships, the USS Cerritos, and the first 10-episode season is expected to be released in 2020. 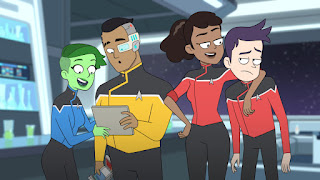 The show is set in 2380 (a year after Star Trek: Nemesis), which means the USS Cerritos shares space with Picard and his crew. Tawny Newsome plays Ensign Beckett Mariner, who appears to be skilled in the use of a Klingon Bat'leth. Newsome describes Mariner as a "weirdo rock and roll party queen," who's good at all things Starfleet and should be further along in the ranks than she is. 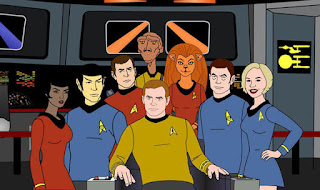 The show is the brainchild of Mike McMahan, the head writer of Rick and Morty who is, it turns out, a big fan of Star Trek. He pitched Lower Decks as a series about "the people who put the yellow cartridge in the food replicator so a banana can come out the other end," and All Access ordered two seasons. It is the first animated Star Trek series since the 1973–74 series Star Trek: The Animated Series, but is likely to be very different to that. The USS Cerritos will have a bridge crew, but they're not the main focus of the show. Instead it is looking like it will primarily be humorous, like Red Dwarf, though the intention is apparently to have the audience "laugh with Star Trek and not at Star Trek."

To end, just a reminder that the best way to support this blog is to buy one of my books. Simply go over to Amazon, or Kobo and get one.
Labels: netflix News sci-fi TV