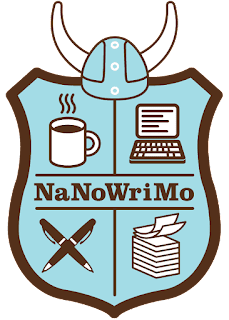 National Novel Writing Month AKA NaNoWriMo is almost upon us again. It's an annual creative writing project that takes place during the month of November, which is just a couple of weeks away as I write this post. The participants in this competition take on the challenge of writing a 50,000-word novel between November 1 and November 30. Signups are already happening now in October, the season of Halloween, which is appropriate when you think of the terror that the white page strikes in any author's heart.

NaNoWriMo isn't a new thing, it has been going since way back in 1999 and has been growing in popularity since then. I've been aware of it for years and I have hummed and harred about taking part ever since. Every time I get closer and closer to taking the plunge and joining in, and this year I have a great idea for a story that would make a tight, hard-boiled little 50,000 word yarn. So every year I go and read up once more about the rules.


How it works is writers wishing to participate first register on the project's website and, just like on any other platform, you post a profile. Once that's done, next comes some information about the novel you intend to write: like a synopses and maybe some excerpts. At the ens, whether you have reached your goal is determined automatically. You submit a copy of your novel for counting by an algorithm, but it's such an easy system to cheat that you are really governed by the honor system.

Doing the math, it works out that you have to write an average of approximately 1,700 words per day, every November day, to reach the goal of 50,000 words. So a more novel-length novel, of up near 100,000 words needs a daily output of almost double that, say 3,000 words. To me, that sounds doable, punishingly hard for a longer book but very doable for a 50,000 word book. Even so, it is still a little daunting, but the organizers of the event don't leave you entirely on your own. NaNoWriMo has spawned countless tutorials, tip lists, FAQs, wikis and Twitter feeds, all designed to cheer contestants on to their own personal finish line.

There are also success stories to keep you motivated. For example, Wool was written as part of the event. Wool is the first in a series of post-apocalyptic science fiction by Hugh Howey. It was published through Kindle Direct Publishing before Howey signed a deal for around $500,000 with Simon & Schuster to distribute Wool across the US and Canada.

I guess it might cross your mind to wonder whether it is a good idea to encourage so much frenzied novelizing. Some would say that there are already more than enough novels out there, that there are many more published words than even the most dedicated binge reader could physically get through in an entire lifetime. But the answer to that is the world keeps changing. The ark of wokeness is long but it bends toward diversity, and there is an ocean of writing out there full of books that should have trigger warnings plastered all over them. It is a very good idea to have new ideas and new viewpoints coming along all the time, to counterbalance them.

After all, writers will go on writing, no matter if they are ever noticed by a giant publishing house or high-flying agent. I should know, I'm one of them. There's not much glory in finally writing that novel if it turns out nobody wants to read it, but there is satisfaction in you knowing it is good, and maybe one day it will get noticed, catch fire, and you can quit your day job. That's a very pleasant dream, so let me just take a moment to savour it... Oh yeah, that's the good stuff.

Oh yeah, we were talking about writing an entire novel in just one month. I'm starting to talk myself into the idea... maybe. Maybe this year will finally be the year.

To end, just a reminder that the best way to support this blog is to buy one of my books. Simply go over to Amazon, or Kobo and get one.
Labels: General promotion self-publishing