The War of the Worlds is Good but...

This TV show has the task of telling a fresh version of a familiar story while at the same time working within the constraints of a limited budget. The results are surprisingly good - not perfect - but impressive for a sci-fi show. BUT before you decide if this show is for you, there is something you have to know: this show should come with a trigger warning. People need to know that there is a surprise scene of implied sexual violence. It is very contrived, absolutely comes out of nowhere, and it means I can’t unreservedly tell you to go watch it, even though it is otherwise a pretty good show. 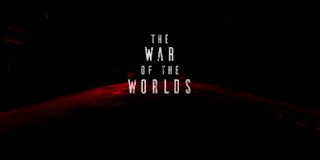 Okay, let’s get into some spoilers so if spoilers are something that you can’t abide, it’s time to click away now. 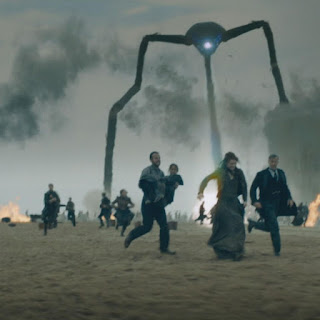 This version of War of the Worlds has a strong, central female character. However the writer, Peter Harness, strongly implies that she sells herself for a can of Lima beans to some random soldier. Obviously sexual violence is a real thing and probably becomes more pervasive as society breaks down, but putting the show’s heroine into such a hugely problematic scene, especially in an adventure yarn like this, is a strange misstep. The whole scene is distasteful and the show could definitely have done without it. If they had to go down this road - and, once again, why? - at least show her braining her attacker with that can of Lima beans. 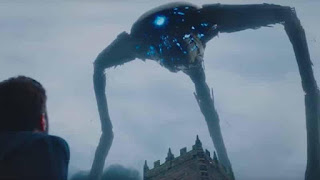 There is other groan-inducing stuff, too. This is a show where a house falls on the male protagonist and he climbs out of the rubble and dusts himself off like Dan Aykroyd in The Blues Brothers. And surviving a collapsing building is plot armor that is not available to other characters. A female servant has a much smaller amount of masonry fall on her and is more realistically instantly killed. Also the couple have a dog, and the moment I saw that dog I knew somebody would be going back into some kind of danger to rescue it, and this does very soon indeed come to pass.

On the other hand, there was a lot of good stuff in the show. I liked how columns of smoke were observed on Mars and, completely unbeknownst to the characters, this was signaling their doom. They were actually excited to be getting their primitive telescope and camera contraption to deliver photos of the smoke trails left by the invaders as they rocketed from Mars on the first leg of their journeys to Earth. That is good writing, and it made me suspect that it came from the original book by H. G. Wells rather than this show’s writer. It turns out I was right:

It had occurred towards midnight of the twelfth; and the spectroscope, to which he had at once resorted, indicated a mass of flaming gas, chiefly hydrogen, moving with an enormous velocity towards this earth. This jet of fire had become invisible about a quarter past twelve. He compared it to a colossal puff of flame suddenly and violently squirted out of the planet, “as flaming gases rushed out of a gun."

The special effects budget seems limited, and shots often look a little off, like old fashioned sci-fi done against green screen, but that did not disturb me at all. I’m a fan of classic Doctor Who, after all. The special effects do deliver where it counts, with some very nice alien tripod machines. They are huge and detailed and menacing.

The scene where they use poison gas against London is particularly effective. It made me think about whether The War of the Worlds is actually an anti-war story. (After some swift research I found out that it is). I’m surprised I’d never noticed how anti-colonial it is. After all, what we are seeing is an invasion and genocide perpetrated by militaristic invaders on a population that is very much less technologically advanced. The irony is unavoidable that this is the modus operandi of the British Empire, seen in its full pomp here in this time period. Or at least as close to its full pomp as the budget of the show will allow.

I particularly liked the scene where four or five British soldiers take on a floating ball of Martian technology using a 3-pounder gun. This tiny looking peashooter has to be aimed using a brass cog, and the fuse on the shell is then set using a pocket knife. This shell is then breach leaded, followed by a separate charge of powder. The breach door is slammed shut and everyone stands back. The gunner then tugs on a piece of string and, at last, after almost a minute of faffing around, the gun actually fires. It is a pitiful display, all in all, and in the mean time the floating ball is killing at will with a heat ray so intense it flash disintegrates the target without even scorching the surroundings. I know this too is unlikely, and the lack of collateral damage from the heat ray is most likely because the special effects budget wouldn't stretch to it, but it is still an unearthly and unsettling effect. The whole scene hammers home the disparity in technology between the invaders and the indigenous people. In this case the subjects of the British Empire on their home turf.

Taking the analogy further, the ability of the British to conquer and subjugate Sub-Saharan Africa was limited only by the ravaging effects of local diseases such as malaria. I had never noticed this aspect when I first read the book (full disclosure I read a comic-book adaptation) but this show makes the irony much harder to miss. Just in case you do manage to miss it, however, one of the characters yells the subtext into the face of his brother.

And another thing - that floating ball effect implies the Martians have some kind of antigravity technology. The thing is, that is a much higher level of technology than the iconic tripod robots. The floating balls blow up within about five minutes of the Martian meteorites becoming active. They are exceedingly strange and their role in the invasion is obscure to say the least. This is one of the places where the show deviates from the book, and my guess is that the writer added them to enable him to crank up tension. It is a fairly superficial trick and it absolutely blows apart any attempt at building a coherent idea of the technological capabilities of the invaders, but it does work. The scenes where the first people at the Martian landing sites are confronted by these balls are gripping.

It is stuff like this that makes the show a bit of a mishmash. Admittedly, antigravity doesn't make any sense, but having these weird balls floating around is undeniably tense and enjoyable. It is a superficial change that sums up this version of The War of the Worlds in a nutshell. I say watch it. It is a classic story with a layer of dumb tension added on top that makes it pretty enjoyable - overall.

To end, just a reminder that the best way to support this blog is to buy one of my books. Simply go over to Amazon, or Kobo and get one.
Labels: sci-fi movie TV