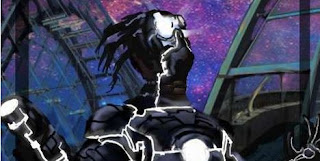 My series of novels are all set in the Dark Galaxy setting, but they are not the first things I ever wrote for this setting. Before the novels came a role-playing game called Extreme Future. I wrote the first edition of this game about a decade ago, but the first elements of the setting have been on paper since the late 1980s, from when when I was playing Spacemaster, MechWarrior, Traveller and Star Wars: The Role Playing Game with my friends. The game I was most interested in was Spacemaster, and I invested a lot of time in expanding the small shreds of world building in that game. Those writings eventually mutated into their own thing, something uniquely mine, even though it was derivative of what has gone before, like any other Space Opera. The setting I ended up fleshing out is based on a political unit I came up with called the Tarazet Star Empire, which extends over a small patch of the Dark Galaxy. I wrote various editions of the game, culminating in an Extreme Future Fate Edition. 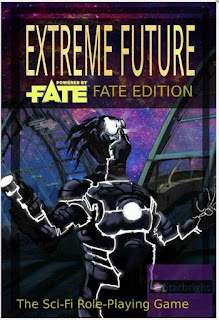 The novels  and the games I write are both set in the Dark Galaxy setting, and they share a lot of DNA but there is no obvious connection between the two properties for a reader of the novels who is also interested in RPGs. So I though it might be a good idea to produce a new edition of the game – the first in half a decade – and change the name to Dark Galaxy to make the connection between the two much more obvious. I can then even advertise the game in the back of the novels, and advertise the novels in the back of the game. Nice.


When I first created the game, I was very interested in FATE but I have cooled on the system since then. The Fate version of the game has a star rating of 1.5 while the second edition has a star rating of 3. That’s not great, I’ll admit that, but it is twice as good as the FATE version. If I am going to create a new version of the game, it will use something with a bit more crunch than FATE. I think the game is better served by a more 'realistic' system, rather than the more cinematic shenanigans of FATE. Right now I am leaning toward Cepheus as that system. 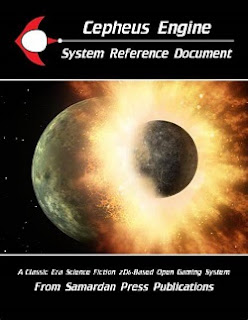 One huge advantage of basing Dark Galaxy on the Cepheus Engine is that it is a distillation of the core rules for a certain Classic Era Science Fiction 2D6-Based Open Gaming System. We all know which one. Okay, I'll tell you, it's Traveller. Inspired by the original three books of this oldest of science fiction roleplaying games, Cepheus puts together a bunch of the Open Game Content from that game to create a basic system that allows writers like me to create our own science fiction universes on the basis of a tried and tested framework of rules.

There are some weird things about the system, such as the famous chance of the character you create being killed during character creation. But that is just something people have by now gotten used to, so I’m not going to hold it against the Cepheus Engine rules. All of the material in the Cepheus Engine rules is considered Open Game Content, so my plan is to import it wholesale and pick and choose what works with the Dark Galaxy setting.

I originally sold my role-playing games exclusively through RPGDriveThru but, if this edition comes out as well as I hope, I could publish it to the general book market through aggregators such as Draft2Digital and Smashwords, in the same way that I publish my novels.

Whether the game will be a huge hit, or not... most likely not, I do enjoy putting game systems like these together. It is a hobby I started young, while still at school, and is the most creative and long-lived interest I have ever had.

I well remember playing games of Traveller with my friends, and learning as much from our mistakes in storytelling as from the things we did right. I remember we were approaching a planet one time and I asked the Referee what the planet was called. Does it matter? was his reply. He wanted to get straight to the action, which was some Western style shoot outs in saloons amid desert landscapes, but with laser rifles. I’m all for that, of course, but I prefer a little world building to have been done beforehand. Or at least generate a name for the planet. There are ways of generating planet names at random, after all. It’s even simpler nowadays, of course, with online sci-fi planet name generators that are discoverable at the click of a mouse.

That same Referee came round to my way of thinking, and used his ZX Spectrum and a primitive printer to create planetary readouts of the planets we visited. He was ridiculed for this by the group of players, but I appreciated it. In fact, I think planetary readouts look better when created using the sort of primitive technology seen on Space 1999, so a heat printer was a very appropriate way to provide us with this information. The Cepheus Engine also has a section dedicated to creating planets, and coming up with a detailed planetary readout, which is just the sort of thing I enjoy in my games of sci-fi role playing.

I’m very keen to start work on this new edition of Extreme Future, even though it is hard to know if I will ever complete it. The more work I do on illustrations, integrating the rules into the setting, and creating a starter adventure, the better the game will be, but that all takes time, and a lack of time is the modern condition. When push comes to shove, if I have to choose between working on the latest novel in the Dark Galaxy series and pottering around with this new edition of the roleplaying game, then the novels will inevitably win out.

To end, just a reminder that the best way to support this blog is to buy one of my books. Simply go over to Amazon, or Kobo and get one.
Labels: Book Promotion RPGs Worldbuilding