Well, it’s over, after nine films and five decades, we have the last film in a triple trilogy, and it is unfortunately a stinker. There are good things in it, but they do not add up to make a good movie. In discussing just how bad Rise of Skywalker is, I am unavoidably going to have to start trading in the spice known as spoilers, so if that is a business you want to avoid, please move along... move along.

The first problem with the Rise of Skywalker is that it does not have a plot, like not at all, just a start point and an end point, and a bunch of roller-coaster events in between. The film is a 150-minute cavalcade of beats intended to be cool and plot twists and MacGuffins necessary to keep driving the action forward.

Unfortunately the cool beats are not cool. For story beats to hit home we have to know what is going on and why we should care, and Rise of Skywalker doesn’t do that. The story comprehensively fails to build any impactful stakes at any point, even at the big climax. Where in A New Hope the target of the big military operation at the end is made very clear, the target is an exhaust port. In Rise of Skywalker their target is first a tower, then a different tower, then the bridge of a star destroyer, and we only find out about each target because Fin senses each new target via the force and tells us. That’s not how the force works, and the rebels may as well be blasting random stuff, if we just find about each traget seconds before it is effortlessly blown up or switches itself off.


The second problem is the big bad. In the last movie, the First Order was in the ascendant (despite news of a heroic stand by Luke Skywalker slowly starting to spreading through the rest of the galaxy, to inspire the next generation) but now the First Order has pretty much disappeared and they have been replaced as the enemy by Emperor Palpatine, and it all happens off screen, in the opening crawl.

Before the movie has even started, the end point of the roller coaster has been set as finding the resurrected Sith Lord. Rey (Daisy Ridley), Finn (John Boyega), Poe (Oscar Isaac), Chewbacca (Joonas Suotamo), and C-3PO (Anthony Daniels) duly set off across the galaxy to find clues to where Palpatine is nonsensically hiding. That’s some pretty thin gruel for a story but it is made worse because, in another confusing move, an arbitrary deadline of a few days is added into the mix. This limited time window is obviously intended to add tension but instead just makes the endless stream of events completely unbelievable because there simply isn’t time to visit all the planets the quest takes them to. They are driven from planet to planet by MacGuffin after MacGuffin, including a glowing pyramid map, a gnarly dagger, a shiny coin, and then another glowing pyramid map, then the gnarly dagger ejects a map, and on and on, like being led by the nose in a particularly linear computer game. 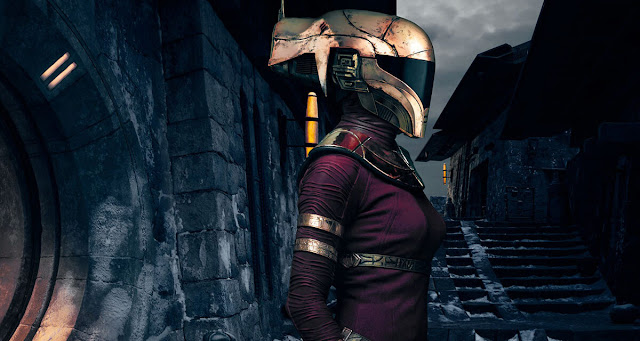 And all these different destinations we are taken to is another problem. The movie is in constant motion, making it incredibly rushed and stupidly cluttered. Everyone is making the point that there is enough ‘stuff’ to make two movies in the story, and it is hard to argue with. Along with having too much plot, there are also too many characters. A lot of characters have already built up over the course of the first two movies in this trilogy, but the writers keep adding more. Lots and lots more. There is Jannah, who is cool, but obviously intended to distract Fin from getting into anything interracial with Rey. There is also Zorii Bliss who is there for a love interest for Poe, but there are more. There is the cute Babu Frik (not Baby Yoda cute, but cute) and a cute new droid called D-O.

I have no idea how it would be possible to do justice to all these characters, and the writers don’t even try. Rose Tico, in particular, gets short shrift. At one point Rose is told to go do some research on Star Destroyers, and that ‘task’ doesn’t even pay off later. It is one of the most dismissive ways I have ever seen a character sidelined. And classic characters aren’t immune from being slighted. Chewbacca doesn’t get much more love from the writers, either. There is a moment where Chewbacca is tossed a medal, taken from Princess Leia after her death, as a hand me down, with no fanfare or recognition, left to stare at it all on his own. Chewbacca is a hero, and in this movie he is treated like hired help. Even worse, nobody seems to care if C3-P0 lives or dies.

That would be bad enough, but there are moments where the tone is even more off. Storm trooper deaths are played for laughs on several occasions and everyone is whooping with enjoyment as they blast the incompetent troopers down. But we find out they are stolen as children and forced to fight, which we have known since the first movie of the trilogy. After finding this out, why are we being invited to laugh as they scream and die?

In the center of all this chaos, Daisy Ridley manages to center the movie by pure intensity of personality. Her new force powers are completely over the top, but that isn’t her fault, that’s the writing. She sells everything she is given to do, and you absolutely believe it when Poe calls her the best fighter they have. Also, Ridley and Boyega again have great chemistry on screen, even if the movie resolutely refuses to go there. It’s like there is an anti-interracial force field preventing them from coming within touching distance.

The movie isn’t all bad. The banter between the characters is good, capturing their stress and testiness, but without becoming outright bickering or bad blood. Everything also looks more or less great, with a nice mix of practical and CGI stuff, but too shiny and neat. It looked like Star Wars toys rather than the real, gritty environs of real Star Wars. And that, in the end, is the main problem. This movie doesn’t get Star wars. The movie breaks Star Wars in many, many ways. The most egregious example is when the movie introduces something they call Hyperspace Skipping or something, and it is super, super stupid. In A New Hope, the Millennium Falcon had to spend precious seconds calculating hyperspace jumps to avoid hitting huge things like stars and moons. In this movie the Falcon hyperspace jumps between stalactites, skyscrapers, and giant sea serpents, all with no time spent on hyperspace calculations. That isn’t Star Wars. That is so not Star Wars.

To end, just a reminder that the best way to support this blog is to buy one of my books. Simply go over to Amazon, or Kobo and get one.
Labels: Star Wars