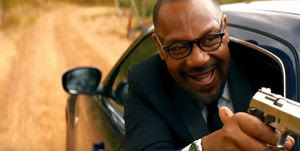 There will be spoilers in this post - great big unapologetic spoilers - so do not read any more if you haven't yet seen the episode. Before I go into any detail, I have to say that I greatly enjoyed this one. There is plenty to criticize but this is an enjoyable and above average slice of Doctor Who. Because this is Doctor Who, however, and Doctor Who is never objectively good, there is lots of scope to gripe, and I certainly enjoy some griping. 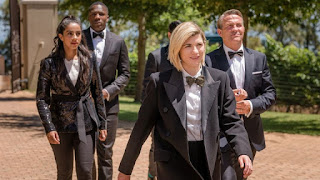 Let's start with the title, Spyfall, a not so subtle pointer that this will be a James Bond pastiche. And, sure enough, in this first episode of a two-parter, the Doctor is initially recruited by the British secret service and ends up shedding her usual look in favor of a 007 impersonation. Her companions all also do super-spy impressions as well, turning into a small gaggle of penguins in their tuxedos and bow ties. Like I said, I ended up enjoying this episode, but I didn’t think that any of this spy stuff worked. In particular, the way the Doctor is recruited by MI6, given an exposition dump, and sent on a mission is a horribly clunky way to set up the story.

The target of the mission the Doctor and her companions are given is a reclusive tech billionaire, who British intelligence believed to be behind a series of attacks on secret agents around the globe. More spy shenanigans follow, and the Doctor even says, “The names’s Doctor….THE Doctor…” in a moment that had me rolling my eyes. This ill-advised spy theme keeps on going, and lasts about half the episode in all, before thankfully fading away and being gradually replaced by more familiar Doctor Who tropes.


We soon get monsters attacking a remote location, the classic base under siege trope that the show comes back to again and again. It was originally invented by producer Innes Lloyd to save money during the Second Doctor’s era, and it provides a format that very effectively ramps up tension and suspense. In this case the base under siege is a shack in the Australian outback rather than a space station, but the theory is the same.

The monsters doing the attacking are intriguing, and the special effects are good. They are anthropomorphic, brightly-burning creatures who can phase through solid matter. They have the potential to be unsettlingly scary new foes, and the more we find out about them the more interesting and complex they become.

Another plus is that the companions are all given interesting things to do, and I was, as always particularly impressed by Tosin Cole’s Ryan and Mandip Gill’s Yaz. I am usually less impressed by Bradley Walsh’s Graham, but he wasn't as irritating as usual in this episode, or I'm just starting to get used to him. Speaking of the companions, the show makes the strange choice of trying to show that they have difficulty making time for their adventures with the Doctor, but... but... time travel. This is the one thing that shouldn't be an issue. The Doctor should be able to pick up companions and drop them off without any time having passed at all for the people in their lives. Devoting any of the episode to this weird idea is a misstep in a fast paced episode that could have used those precious minutes to make some of the other scenes breathe a little more.

Spyfall's globetrotting, high-velocity plot revolves around the headquarters of a fictional tech company run by the villainous billionaire target of the Doctor's mission. He is played with depth and menace by Lenny Henry, who I have not seen play an evil character before, and I was very impressed. But, and here comes that spoiler I warned you about, Henry's character is not the baddest guy in the episode, the biggest bad here is... The Master. Yes, he's back.

Apart from the Daleks, the Master is the Doctor’s most popular and persistent enemy. He is a renegade Time Lord, just like the Doctor, and was conceived as the Moriarty to the Doctor's Holmes, though their relationship is much closer. The Master has been in the Doctor's life since they were both at the Academy, and he can never quite decide if he wants to kill the Doctor or not.

I have always loved stories featuring the Master because he is such a complete villain, and this new incarnation is very recognizably the same character. Over the years, the Master has skidded ever more into unhinged madness, and this new version continues that progression, with a very interesting take on the Master's idiosyncrasies. The Master has always taken a lot of pride in who he is and what he does, even if that is aspiring to rule the entire universe. He enjoys doing random evil, often deciding on over complicated evil schemes, just for his own amusement. For example, the Master once said that just firing missiles at the Doctor from a distance lacked "that personal touch".

In a way, the Master is the perfect fit for an episode with a 007 theme, after all Erst Stavro Blofeld has been an enduring influence on the character. From fashion, his Nehru jackets, to outright kitty-stroking and devising elaborate deaths for unwary henchmen, he is the most James Bondish of the Doctor's rogues gallery. Despite their long rivalry, however, the Master is a friendly rival. How friendly depends on which incarnation of both the Doctor and the Master, but at the very least there is almost always some level of respect between the two. In this incarnation, the Master's fixation on the Doctor seems to have become even more unhealthy, now verging on obsession. We see a small library of information that he has collected on the Doctor, that he describes as contradictory but fascinating.

And that's not all. In the seventies and eighties stories, the Master's trademark weapon was the Tissue Compression Eliminator, a Shrink Ray that he used to leave miniaturized dead bodies scattered in his wake wherever he went. It is great to see the return of the Master's penchant for murderous miniaturization in this episode, here creating a corpse tiny enough to fit in a matchbox. It is also he who is behind the alien invasion, in a typical Master move that makes what has gone before the reveal that the Master is in cahoots with the aliens all the more confusing. If the Master is the bad guy, what is the tech billionaire up to? 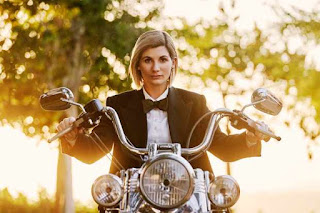 Before we can come to grips with that question, the Master kidnaps the Doctor and leaves his companions to die on a plummeting aircraft, in a move that is very 'on brand' for him. This sets up a very satisfying cliffhanger of the kind I used to love when watching Doctor Who from behind the sofa, back in the 1970s. There was even a crap car chase: Pertwee would be so proud.