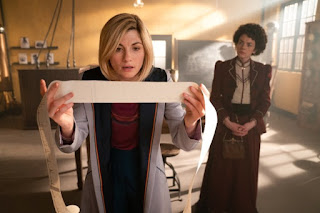 After last week’s absolutely terrible episode, this week we get a return to form. This isn’t a great episode, but it isn’t bad either. In fact, in a way, it is very much what the show was originally intended to be. It is mostly educational, with a dash of adventure, though that adventure ingredient is the most lackluster part of things, being pretty much by-the-numbers.

We start in 1903, at Niagara Falls, where inventor Nikola Tesla and industrialist George Westinghouse created the world’s first hydroelectric power plant. I was astounded to find out how long we have been able to generate power this way, and it is a constant conundrum to me that we have not made more use of naturally generated power like this through human history. This doesn’t have a lot to do with the story, of course, but it was edifying and fascinating to find all this out.


After opening his new power station, Tesla is soon being chased by a creepy looking guy, and only escapes with the help of the Doctor. This creepy guy, of course, turns out to be an alien, but not a well thought out one. He is a scorpion but can disguise himself as a human so as not to attract attention. He can shoot bolts of energy from his hands, but he carries a gun that shoots bolts of energy. It feels like the Skithra, for that is what these particular aliens are called, were made up on the fly, with powers and abilities added as the plot required. Interestingly, the gun the creepy Skithra guy was using was built by the Silurians. I do like a mention of a classic enemy.

On top of the scorpion form, which is realized with some good-for-TV CGI, and the creepy guy form, the Skithra also come in one more shape. This is because the queen takes the form of a lady in a costume. Unfortunately it’s a costume that is so bad it looks like something from the Masked Singer. Actually it’s not bad, it is just that the costume is so brightly lit and shown in such closeup and from every angle that we see entirely too much of it. This does allow us to see how beautiful a piece of work it is, but it makes it difficult to suspend disbelief and imagine that this is an alien rather than a lady in a nice costume. All in all, the Skithra are not great aliens and not particularly scary.

They are also not particularly smart. Tesla, we find out, is being targeted by them because they think he is clever enough to fix their broken spaceship. That’s an idea that works well enough to drive the plot, but how likely is it really that aliens capable of piloting a starship need a random inventor from Earth’s history to fix it, no matter how much of a genius he is. They should be able to better do it themselves. It just doesn’t really make sense. Another gripe is that because the plot involves a lot of inventing, everything has a very steampunk vibe that isn’t my favorite take on Doctor Who.

The story does work well when it is weaving in those educational elements, however. At this point in time something called the War of the Currents, where Tesla and Edison were competing against each other’s system of transmitting electricity, was raging. Tesla’s electricity was called alternating current while Edison was pushing direct current. The public at this time were frightened after a few deaths caused by overhead high voltage AC lines, so Yaz and Edison clear a street by screaming at the bystanders that AC electricity is coming to get them.