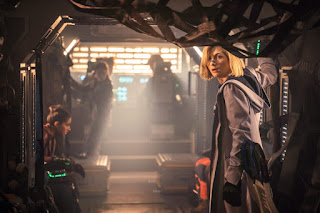 There was a lot of good in this episode, unfortunately, probably the most important part, which is the writing, was not one of the good things.

I love Doctor Who and I don’t want to start out too negative so I'm going to start by talking about what I thought was done very well. First, and in my opinion foremost, was the amazing work they did in finding unusual looking locations and shooting them to look like an alien environment. There were two main locations, some kind of modernist building that looked like a shriveled version of the Sydney Opera House, and some mud flats that, when shot from above, I’m assuming using a drone, looked very like some kind of lunar landscape.

The vehicle they designed also looked great, both inside and out. I absolutely bought it as the kind of rugged transport a terraforming mission in the future might use as a runabout on a planet with a hostile atmosphere and dangerous surface dwelling creatures.

That brings me to the creatures, which also looked great. The direction let them down a little by allowing us get a little too much of a good look at them. The camera lingered on the creature suit long enough in bright enough lighting for me to spot the seam where the head of the monster was attached to the neck. Despite that problem, the creature suit itself was a thing of beauty. The monsters also had a cool, memorable name, the Dregs.

Another thing I liked was that Graham was pretty much sidelined. I am not a fan of Graham and any episode that shows no interest in him except as bumbling comic relief is doing the right thing with that character, in my opinion. It is pretty common for genre TV shows to add a child character for the kids in the audience to identify with. It says a lot about who Doctor Who thinks is watching for them to add a pensioner character for the old farts in the audience to identify with.


Okay, with all the good stuff out of the way, on with the bad. The editing, direction, and most of all the writing let this episode down, and let it down badly.

First the editing. We were presented with endless closeups of the teeth of the monsters, and I just didn’t understand why. I get that Doctor Who can't show people being torn limb from limb and having their entrails nibbled like overdone spaghetti, but a long close up of obviously plastic teeth is no replacement for that. You have to find some way to actually scare your audience and the only people these shots had any chance of frightening were viewers phobic about going to the dentist.

Then came the direction. The monsters are introduced as swift and deadly, very effectively converging on the base under siege, breaking in, and starting their work of murdering large numbers of the poor schmucks inside. So far, so formulaic, but that part was done well. Then we actually see some of the monsters, the Dregs, in the same room as some extras and we have been led to believe we are going to see some swift and savage devouring. Instead, the monsters pose like embarrassed cosplayers and growl at the sky. That seems to be pretty much their only move, growling at the sky. They do change things up a little by rattling a chain link fence here and there, or shambling from place to place at a speed that would see them lose a race against a Zombie on The Living Dead, but we never see any hint of these monsters being any kind of threat while they are on camera, and that is down to the director.

Okay, the directing and editing was less than ideal, but that is only to be expected from an episode of Doctor Who. The real crime here, the thing that took this episode from the usual, endearing, traditional-for-Doctor-Who levels of bad to just plain bad-type bad, was the writing. This was the most cackhanded attempt at writing an episode of TV sci-fi that I have seen in a while, and I watched and enjoyed Another Life.

The writer, Ed Hime, seems to be impressed at coming up with the idea of using a sci-fi future to say something about the world we live in today. He seems unaware that this has been one of the primary themes of sci-fi since HG Wells used The War of the Worlds to make an overt criticism of Western colonialism. Ed has decided that he wants to say something about climate change, which is that it is bad. I happen to agree with this sentiment but I don't want to slapped in the face with it as if it was a dead fish. Where Wells subtly wove his themes of the evils of invading other cultures through his story, Ed just has characters stop what they are doing to point at the way climate change is being used as a theme and even deliver lectures to each other about how it's bad.

If that were the only problem, it would he forgivable. A good story that grinds to a halt now and again when the writer gets on his high horse is still a good story. But this isn't even that.
Let's start at the beginning, because the way the Doctor and her companions end up in the adventure is just stupid. It might work for some extremely lighthearted and whimsical take on sci-fi, like The Hitchhiker's Guide to the Galaxy, but not for any show that even pretends to want to be taken seriously.

Here's what happens. Bumbling grandpa Graham has been cutting out coupons from some kind of galactic newspaper, (obviously, that doesn't make sense), and he puts them together and they make some kind of device, (that doesn't make sense either), whereupon this device teleports the Doctor and her companions to a hotel on an unknown distant planet. Now that really doesn't make any sense at all. We are then told the device has remembered where it teleported them from, and can teleport them back at any time. That's just stupid.

Then Ryan goes to a vending machine and catches a virus from it. That is so dumb I was rolling my eyes. To cure the virus he must cough into a bag and then suck his thumb. I'm sorry, what? It felt like the show was doing all it could to set the scene for some kind of comedy episode. I wasn’t enthusiastic, but I was prepared to go along with it.

However, then we find out the hotel is located within a dome and outside the dome is a hostile wasteland. That part is quite good, it has potential. It has nothing to do with what has gone before, thematically, but it has potential. Then we discover that creatures have broken in and are devouring hotel guests. That, again, works well. But then things go completely haywire. The creatures are pushed out of the hotel using a force field. Some old hotel guest goes with them. The hotel manager, security officer and an essentially random selection of guests, including a child, go off to retrieve him. The rational for sending such a strange collection of people is never given. The cool vehicle they are in falls into a trap and is surrounded. Now the old coot they have come to rescue somehow seems to be running with the Dregs, as if he has been transformed into one of them and has been accepted into their tribe. It was all just so confusing.

The passengers escape the surrounded vehicle, how is not clear, and much more stupidity happens, including an alpha Dreg that locks itself in a cage for reasons too stupid and complicated to go into, and one of the guests being revealed as a bomber who wants to blow up the hotel because her mother, the hotel manager, didn't spend time with her as a kid... or something.

There are teleporters scattered around as if this was some kind of computer game, but there are also all kinds of contrived reasons why they won't work. Then there are the umpteen times that characters sacrifice themselves so the Doctor and her companions can escape. It happens over and over again. The hotel manager sacrifices herself for the doctor twice. She goes into certain death once, then pops back up with no explanation, as if she has respawned, and then sacrifices herself again, this time taking her bomb-happy daughter with her.

A base under siege setup has tension baked in so deep that it is hard to mess that up but this writer has managed it. The monsters break in seconds after we discover they even exist, taking away the tension of waiting for that to happen, and instantly kill almost all the extras. That only leaves more important characters with plot armor, so all the monsters can do is stand around and growl at the ceiling. Having characters constantly be in the same room as packs of snarling monsters, surrounded by these snarling monsters, and chased by snarling monsters and have nothing happen to them, over and over again, soon robs the things of any sense of threat.

The whole story is just a giant, amateurish mess and does Doctor Who a great disservice. The production values on the sets, locations, creature costumes and vehicles were great. The cat costume Hyph3n was wearing was all kinds of bad, but the rest was great. If the show combined this level of professionalism in the visuals with a half-way competent director and a story that made any kind of sense, it would be something beautiful and amazing. As is, it was nice to look at in places, but so annoyingly badly written it was painful to watch.