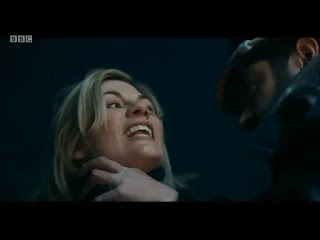 Let’s talk about Doctor Who series 38, episode two, which is part two of Spyfall.

I am a fan of Jodie Whittaker’s debut season last year but this one is shaping up to be even better. This episode pays tribute to classic Doctor Who while also forging ahead in the new directions it has already started along. There were were fewer of the James Bond shenanigans and there was less of the globetrotting of the first episode, making this more like a real Doctor Who episode. It was also nice to see time traveling being used as an integral element of a show about a Time Lord. Something I didn’t like was that the Doctor now suddenly seems to be worrying about wiping the memory of people she has met. She has never bothered doing this before, and I would be quite happy if that tradition continued. But, despite a few gripes, this was an excellent and very entertaining episode. 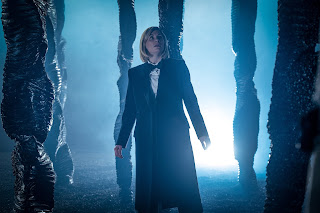 The cliffhanger last week left Ryan, Yaz, and Graham on a doomed aircraft, and of course they escape with the Doctor’s help, but cleverly we don’t find out exactly how until pretty much the end of the episode. At the start of the episode the Doctor is in no state to help anyone. She is forced to be on her own after being constantly surrounded by her companions since her most recent regeneration. Whittaker’s Doctor is constantly chattering to anyone who will listen, and on her own continues chattering, even with nobody to hear. There was a vulnerability about the Doctor when she realized she was completely alone, and it was powerful.


Ryan, Yaz, and Graham find themselves on the run almost as soon as they escape the plane, and there is a great scene when they rest in a building under construction. They realize how little they know about the Doctor, and seeing the Doctor through their eyes very much adds to her mystery.

The only real weak point of the episode is the monsters, the Kasarven, who are not in any way frightening. If they attack you, you just end up in a spooky forest for a while, and their motivation is extremely difficult to get your head round. Why do they need the help of the Master? Well... they don't. One thing, however, does become clear and that is that the monsters have some kind of plan and it has something to do with computers. This results in the Doctor running into Ada Lovelace in the spooky forest dimension, and then traveling to Ada’s London. Ada Lovelace, the founding mother of computing and Lord Byron’s daughter, has become something of a national icon in the UK over recent years, and it is nice to see her in Doctor Who. The trip to old-time London was a little steam punk, but it was enlivened by the Master arriving and using his trademark miniaturization ray, completely unapologetically, and really enjoying it.

It looked like the Doctor was stranded, but she had the idea to force one of the monsters to take her to modern day London, using the sonic screwdriver. She doesn’t quite manage it, ending up in Second World War Paris instead. The Master soon arrives here, too, disguised as a German soldier. Where the monsters visiting Ada makes sense, as their plan involves computers, their interest in wartime Paris does not make quite so much sense. We do, however, meet Noor Inayat Khan, the second historical figure of this episode. She was a World War II spy, and I was fascinated to see her. I imagine the only reason the episode takes us to this point in time is to tell us about this amazing lady. We also get to see Ada Lovelace’s horror at seeing a burning Paris, a foretaste of the Doctor’s visit to Gallifrey at the end of the episode. In an attempt to comfort her, the Doctor says a line that I am quite convinced will become a classic. “These are the dark times,” she says. “But they don’t sustain. Darkness never sustains even though it feels like it might.” 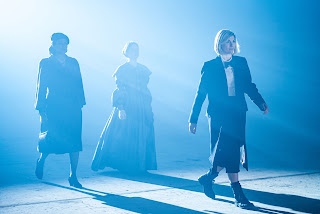 I am not sure why we ended up in World War II, but I’m certainly glad that we did. We even see telepathy between the Doctor and the Master, which is a very nice callback to Classic Who.

Lenny Henry was restrained and menacing as the Big Bad, and his involvement made a lot of sense as a totally unscrupulous tech billionaire, selling out the rest of humanity in order to save his own skin. You can imagine Zuckerberg doing exactly the same thing, especially after his secret dinner chat with Trump.

A slightly bum note came when the Master sent the Doctor on a trip to Gallifrey, which has been completely annihilated. Destroying the Doctor’s home planet is taking a sledgehammer to the story, where something a little more subtle would likely have worked better. The Master has taken on Gallifrey before, back in Tom Baker’s time, in the 1970s, but his plan was to assassinate the president. Destroying the entire city seems overkill. Doctor Who has always made up and retconned its canon as it goes, and the Gallifrey will obviously be back, but it is still a mistake to blow the place up. After Davies, confusingly to me, destroyed the Doctor’s home planet at the beginning of the 2005 revival, and Moffat brought it back again with a wave of the hand, Chibnall has gone and razed Gallifrey to the ground yet again. It’s all just starting to verge on the ridiculous. The Doctor’s stricken reaction to seeing Gallifrey burning could have been elicited by something new and interesting instead. It did lead to her brushing off of her companions’ requests to see Gallifrey, and that was interesting, so I am willing to go with it.

Despite the excess of this act of destruction, the character of the Master is just perfect. The Doctor accuses him at one point of being his classic self, and I can only, happily, agree. He then expands on the hint he dropped last time when he said,  “everything you think you know is a lie”. This episode he specifically denounces the founding fathers of Gallifrey as traitors and says the myth Gallifrey was built on, ‘the lie of the Timeless Child’, is somehow involved in their betrayal.