Lost in Space is back for a second season and it continues to be pure entertainment. This is a reimagining of a 1965 sci-fi series and it is brave enough not to have rethought the outrageously old-fashioned scenario that is the Robinson family... in space. Lost in Space has always been unafraid to demand suspensions of disbelief, and that continues this season, but not everything is the same. A few things have been tweaked and expanded for season two, and almost exclusively in good ways. The show still focuses so hard on thrills and spills that it is more like a roller coaster ride than a TV show, but it does find space for character development and an overarching story line, here and there.

There is a Christmas-themed opening to episode one because of the December 24th premiere of this second season, and it works as a good way to show that seven months have passed since the shipwreck of the Jupiter 2. The family has been focused on survival on the hostile planet they find themselves on, which includes having set up an improvised greenhouse to protect crops they have planted from a poisonous atmosphere. Dr. Smith confined to her quarters and they are creating an existence out of whole cloth, but then, true to form, danger comes.


The storytelling in Lost in Space is based round a formula where every episode a danger is presented for the Robinsons to overcome through scientific ingenuity and cooperation. The danger to be overcome turns up so regularly, episode after episode without fail, that it seems like the Robinsons themselves attract it. Nothing can ever go right for the Robinsons because that’s the story’s blueprint. There has to be some type of unforeseen space peril every episode. But that conceit is part of the show’s charm, and there’s plenty of great dangers to choose from on the planets the Robinsons visit. There are beautiful dinosaur inspired beasts, an Andromeda-Strain-like metal eating organism, man eating seaweed, and stampeding alien wildebeest, to name just a few.

The special effects that bring these dangers, and the alien vistas this all happens against, to life are dazzling. There are a handful of sequences with menacing alien animals and enigmatic transforming robots that are truly impressive, the sort of thing that belongs in a movie rather than a TV show.

The role of the ‘evil’ Dr. Smith is another outrageously dated idea from the original 60s show that has been continued in the Netflix version, and she is her usual evil self, but there is more focus to her acts. She is intent primarily on self-preservation, creating a cover story for who she is and making a place for herself on the colony ship, the Resolute. Through her we learn a lot more about what has been happening on the colony ship while the Jupiter 2 was lost.

The story line that carries through the entire season, after the Robinson’s return to the Resolute, is a caged robot, like the one that has befriended Will, a robot called Scarecrow. The Robot’s technology is what enables the colonists to travel to humanity’s new home and back, but the robot must be compelled to do it, which those in on the secret see as a necessary evil. Even after this secret is revealed, the overarching mission continues to be getting the entire Resolute and all of the colonists to Alpha Centauri, but that keeps moving ever out of grasp. 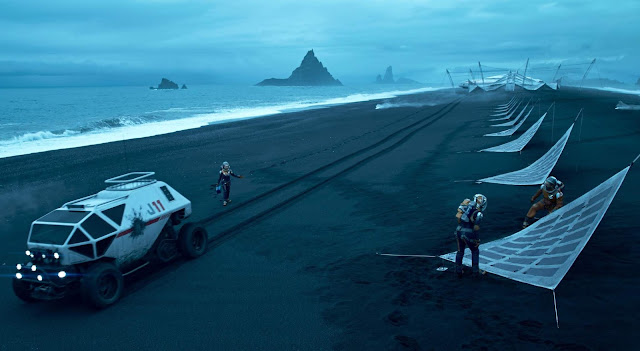 The most interesting developments in the actual characters are that rough diamond, Don West, more and more takes on the role of keeping the family together, while Parker Posey, as Dr. Smith, is always looking for a weakness in the family dynamic that she can exploit. The Robinsons can be a bit saccharine with all their love and support, so it's nice to have a more cynical loner in the mix, especially as she sometimes rises to perform heroic acts.

Will and the robot's relationship also keeps growing and changing from season one, and it is thrilling not to know for sure what this machine life form is truly thinking. More layers are added to the mystery of the robot’s origins, and we get to see huge works of engineering, most likely created by them.

The ending of the series makes no sense and comes out of nowhere, and an army of robots appears out of nowhere. Chaos ensues, the colonists’ children are shot out into space, Dr. Smith is seemingly killed off screen, and there is a wonderfully evocative shot of a planet being busted apart. There is finally a great reveal about Judy’s biological father, and the season ends with plenty to do in season three. It was as rushed and confusing ending, to be sure, but I am not against it. Every character is now even more lost... they ship full of children literally don’t know where they are, so I can’t wait until next season to see how this all gets resolved. Lost in Space will likely never inspire the devotion of a Star Trek, but it could become a genuinely great sci-fi space opera, and I hope Netflix decides to renew it for a third season.