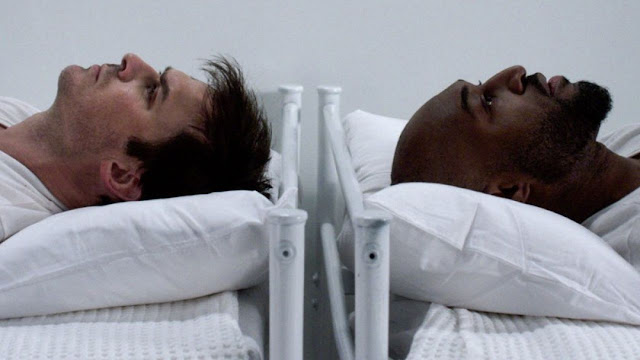 I was wondering what sci-fi show to watch next, after binging season two of Lost in Space, and my search resulted in V Wars appearing on my radar. It’s sci-fi but it’s also horror, and it’s based on novels and graphic novels by Jonathan Maberry. I checked into it a little to see if it would be worth my time, and the reviews were mixed, to say the least. 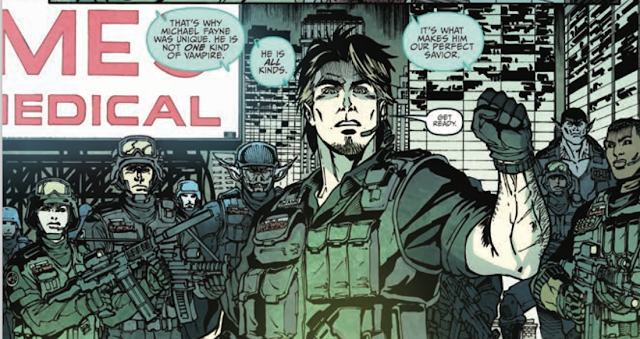 From my research I discovered that V Wars is about a scientist called Dr. Luther Swann and his best friend Michael Fayne. Apparently they get caught up in an evolving crisis that fractures society and escalates to a future war between humans and vampires. The outbreak, intriguingly, is caused by climate change releasing an ancient virus that turns humans into vampires. That sounded right up my street, though the tepid reviews gave me pause.

I watched the first episode, and it moves fast, very fast. It doesn’t put all the moving parts described above in place, but it does get a lot of the foundations for a vampire war set up, all in one episode. We start at a snowy Arctic research station, and within seconds we see a scientist commit suicide. This is obviously after discovering the virus that has been exposed by global warming, of course, and the show doesn’t waste much time in confirming that. We immediately cut to Dr. Luther Swann (Ian Somerhalder), who is coincidentally lecturing climate scientists about how he believes the most pressing threat to humans is ancient pathogens that are being released by melting polar ice caps. Swann is immediately given the mission of going to the Arctic station to find out why there have been no communications with the team there.

If you enjoy vampire stories like V Wars, it is likely you will enjoy Forever Young:

Forever Young is a modern take on a classic Gothic novel, combining horror, death, and romance. We meet Jasmine, a student of anthropology, newly arrived in Venice, and to Violetta, who is trapped in an ancient and violent world with no escape. After the two meet, Jasmine gradually awakes in Violetta the desire to escape. The book is also available at Kobo and at Smashwords. For a limited time at Smashwords, use the code YN54L for 50% off Forever Young.


It is Swann’s friend, Michael Fayne (Adrian Holmes), who flies him up to the station, and the two of them find a torn biohazard bag and a skull fragment. Swann realizes that they’ve been exposed and they are put in quarantine the moment they arrive back in the States. They are then quickly released, even though a lot of questions are still unanswered about the pathogen, in one of the many turns in the plot that doesn’t quite ring true. 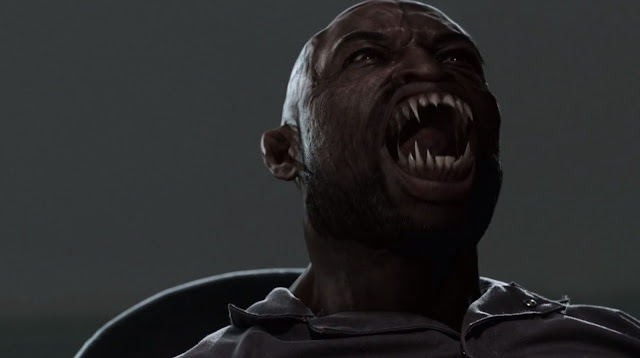 Fayne immediately starts to change, gaining acute hearing, vision, and strength. One night, he calls Swann from a random apartment in a panic, and Swann is confronted with his desperate friend and a dead woman. In another extremely unlikely character choice, Swann helps him clean things up.

The next day he realizes that wasn’t the right thing to do – like, no shit. He goes to the police, confesses to tampering with a crime scene, tells them about his friend, and the cops go out to catch him. The police find Fayne attacking another woman, and they shoot him and take him to the station, but he doesn’t feel much pain from the wounds.

Then comes the trope where the police say to Swann that Fayne will only talk to him, and they actually let Swann talk to Fayne alone in an interrogation room. Fayne soon realizes Swann snitched on him and breaks out of his restraints and attacks, after which he ends up on a mental health ward, and then he escapes from there too. 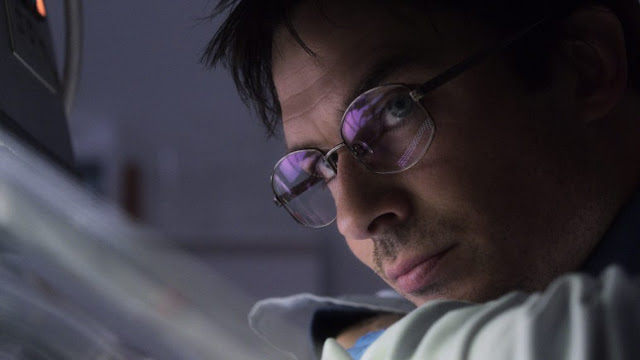 Swann has by now worked out that he is dealing with a virus that turns people into vampires, and working with the police he discovers that it’s spreading. The police charge him with obstruction, for cleaning up the scene of a crime, but he begs the detective investigating the case to let him go, just for a few hours, to make sure his son and his wife are safe. Completely inexplicably, the cop say, “Yeah, sure.”

I could have told Swann that he wasn’t going to like what he found when he got home. By this time the low quality of writing here was painfully obvious, and the fact that his wife was about to be fridged was close to a certainty. When Swann gets home, a vampire attacks his son, and Swann jumps to his defense. He manages to kill the vampire. But when the vampire’s face turns back to normal, he realized that he just killed... dun, dun, dun, his own wife.

He actually kills her extremely easily, too, considering she is now a super-strong creature of the night. It looks like the vampires are going to fluctuate up and down in strength, deadliness and vulnerability depending on the whim of the writer. The strong as they need to be trope, in other words.

With Swann’s wife transformed back into a human, it looks a lot like he killed her. The cops then turn up, and then the credits roll.

Now, obviously, V Wars isn’t good. It is bad, but is it an entertaining kind of bad. On that front, there is some good news. The actors in the main parts, and some of the supporting actors too, are good. They make the formulaic and nonsensical writing easier to swallow. It’s impossible to guess what the friendship between Swann and Fayne actually means, at this early stage in the story. I can only imagine that they are going to be pitted against each other in the V Wars to come, and it does bode well that Somerhalder and Holmes have some chemistry.

There’s also a subplot involving a muckraking true-crime blogger called Kaylee Vo (Jacky Lai), who starts investigating the killings, but nothing much comes of it in the first episode. I like her and her intern, so I hope they become more integral as the story progresses.

V Wars looks like it is going to be enjoyable schlock, and I’m in. The show doesn’t seem to have made much of a splash. I didn’t see any stories about it on io9 or BMD, but I like it.

To end, just a reminder that the best way to support this blog is to buy one of my books. Simply go over to Amazon, or Kobo and get one.
Labels: Horror vampires