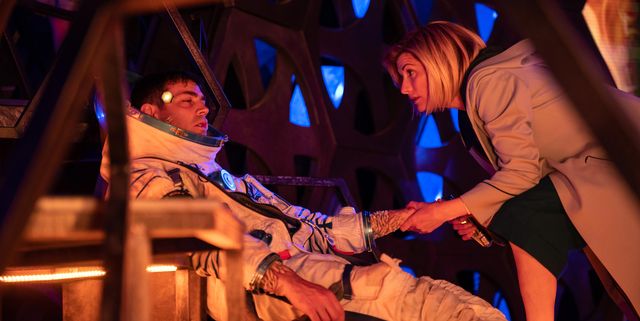 After the revelations and reveals of last week’s Fugitive of the Judoon, this week writers, Pete McTighe and Chibnall fall back on a more pedestrian format for Praxeus. The fam separate and all go on different missions in London, Peru, Madagascar, and Hong Kong. The problem is that the story does not benefit from jumping from place to place like this. Everything that happens could just as easily take place in a single location.

In theory, the fact that the Doctor’s companions are given more autonomy could be a good thing. Unfortunately it isn’t super earned. The companions all gain skills that they have never had before and then go back to being useless as the story demands. The show needs to decide if they are competent agents of the Time Lord or her idiot assistants. They can’t be both.


Another problem is that after the overt message in Orphan 55, that climate change is bad, here we are again beaten over the head with the message. This time plastic pollution is bad. In another echo of Orphan 55, the special effects in this episode were great. The way the Praxeus virus dried out and explosively desiccated its victims was very well realized. The TARDIS on the beach also looked wonderful. If only the visuals were in the service of a better story. This, however, is an hour of Who in its simplest form. Sure, there are ill defined aliens to fight and there is a mystery to solve, but that only starts to come together in the last third of the show.

The episode zips along at a frenetic pace, ping-ponging from continent to continent as it teases us with hints of the mystery at the heart of the story, but refuses to let us in on it. There are a huge number of characters and a lot of plot, which means that the episode’s emotional moments feel rushed. A YouTuber’s friend is killed but she hardly has time to care, while two other characers work out years of marital conflict in a few minutes. 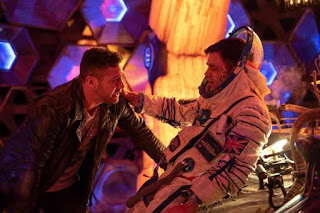 With such an overstuffed cast and plot, it is difficult to engage with Praxeus. It looks attractive, especially the beach lab in a blue container. This one location would have been perfect for a Base Under Siege story, and there would have been more time to work out what was going on without having to jump from location to location. It could have been even better with some classic enemies. At one point, for a brief moment, the Doctor even wonders if Praxeus might have something to do with the Autons. It would have been so cool if the killer mannequins had actually been behind this.

All in all it was a very average episode of Docotr Who, though it was pretty. Most of it was perfectly agreeable, except for one story beat that didn’t sit well with me. This was the moment where the Doctor saves policeman Jake, when the ship he is somehow piloting starts to fall apart around him. Jake volunteered to fly it when it developed a convenient fault that required somebody to volunteer to fly it. That was groan inducing enough but even worse was the Doctor materializing the TARDIS around him, rescuing him with milliseconds to spare.

The thing is, this has never happened before. The TARDIS does not materialize round things. In fact, back in 1982, one of the Fifth Doctor's companions Adric faced a similarly contrived fate in Earthshock. His freighter collided with Earth, and the Doctor couldn’t materialize round him and save him. That was a good thing because he was a pain in the ass, but the nagging doubt that we just saw the powers of the TARDIS being redefined will not go away. If it can just materialize round things, then why even open the doors? The show comes up with a weak excuse about the spaceship having to break up before the Doctor can do this new trick, but that just raises more questions? We know the TARDIS can materialize inside things. Spaceships don’t have to break up for the TARDIS to get inside them, it is the materializing round things that is new and wrong. 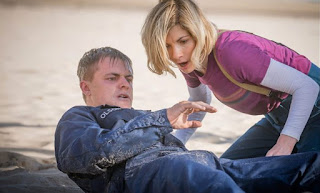 For me, the Doctors lack of precise control over the TARDIS was always a very endearing part of the character, and I hate that she can now hop from location to location on the surface of Earth, and now she seems to have split second control of precisely where and when it appears, even within a fast moving and exploding target.