One of the things I have always loved about sci-fi is the futurology. I love all kinds of sci-fi, even silly old movies like Nightflyers, but I particularly like sci-fi that tries to extrapolate some part of human nature, or some part of the world we know, and take it into the future to see how it might change and mutate.


A lot of sci-fi looks at how society might change, and often exaggerates the predictions in order to make a point. Logan’s Run, for example, is prophetic in its prediction of Grindr and Tinder and a future society's obsession with youth. Even schlock like The Purge or The Island have interesting things to say - on law and order and on replacement human parts respectively.

But I also like it when a movie takes this instinct to explore how the future might change and mutate, and applies it to seemingly insignificant background detail, like transport and architecture. Take Blade Runner, for example. I am not a fan of the misogyny in Blade Runner, but where it fails in its predictions of where society and human nature are going - I hope - it does score in its vision of architecture and vehicles.

The city in Blade Runner is full of ancient buildings, but they have been retrofitted with a veneer of modern technology. They look great, filled with a fog of condensation and with water running down the walls from the constant rain dumped on them by the messed up environment. And swooping among these crumbling piles we see flying cars. According to the Blade Runner Wiki they are called spinners.

"Spinner is a nickname for the type of Police flying car in Blade Runner that can drive as a ground car, take off vertically, hover and cruise using jet propulsion much like Vertical Take-Off and Landing (VTOL) aircraft today. They are used extensively by the police to survey the population, and its clear that despite restrictions wealthy people can acquire spinner licenses. It was designed by Syd Mead and has been replicated in films such as The Fifth Element and Star Wars prequel trilogy"

I never thought they worked as well. In the absence of anti-gravity technology, it is not obvious what scientific principle is behind their mode of flight. It seems like a misstep in a grounded movie, just for the sake of cool, but even without anti-gravity there might be a way we can get to a future with flying cars, after all. 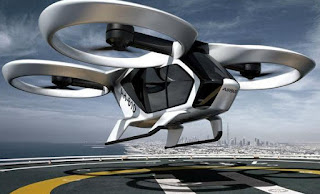 I was just reading a post about the flying taxis that Airbus are designing. The company is pretty gung ho about the project: "Airbus believes its CityAirbus flying taxi could be adopted in pilot projects in large cities as soon as 2022 or 2023," Mark Cousin, Airbus’s head of flight demonstrators says. "I think once we start seeing this becoming real, in some of the cities which are really planning for the smart city of the future, we’ll see a very fast adoption."

The design in the Airbus concept painting isn't particularly complex looking, in fact to my non-engineer eye it looks like a scaled up drone with a two-seat passenger compartment attached to the underside. It therefore looks like a very doable idea. The vehicle has vertical lift off and landing so no undercarriage is needed more complex than skis, like a helicopter, and the source of lift is very obvious.

After reading the post, I felt inspired to sketch a design for a flying car of the future. I’ve sketched a bigger, more complex car, but it is based on exactly the same simple principles as a four fan drone, just like the Airbus design. It was fun to sketch and if I ever manage to find the time I might even play around in Blender to create a 3D version for me to play with.

It even makes me want to write some near future sci-fi, a genre I haven’t turned my hand at yet. I’m not a huge fan of cyberpunk, but it would be worth it to imagine some of the technologies that are just around the corner. In the meant time, why not read some of the space opera I have written, where the flying cars are powered by anti-gravity. And that is also the best way to support this blog. Simply go over to Amazon, or Kobo and get one of my books.
Labels: Worldbuilding