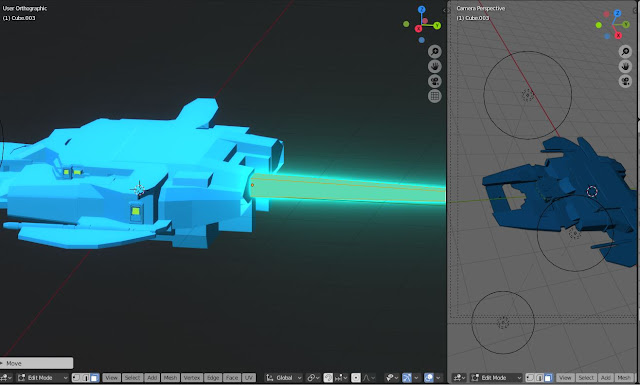 As I mentioned in a blog post a couple of days ago, I am currently working on the cover for book number six in the Dark Galaxy series. As with every other book in the series the cover is going to be a close up of a cool spaceship swooshing through space. I’m making steady progress with the image (though there is a long way to go) and the element I wanted to add next is the shiny plume of superheated glowing stuff that spaceship engines in space opera yarns traditionally leave behind as they fly through space.

As TVTropes notes: in sci-fi most spaceships give off impressive plumes of fiery exhaust when they’re moving. For the most part, this exhaust is just there to show that something’s happening, which is the purpose it will be serving on my cover. But the site also notes that a spaceship exhaust can double as a short-range weapon, especially during a getaway. Starship pilots, it says, can cause enormous damage with their drive flames. I’m personally against such shenanigans, I mean what’s the point of weapons if the spaceship’s engine is a more effective means of attack.

I make my spaceship covers using Blender, and Blender is constantly evolving. And the way shiny plumes are made is also constantly evolving, so to fond out how people are doing this right now I quickly Googled up a YouTube tutorial. I couldn’t find a tutorial for a spaceship exhaust plume, but I did find one for a light saber, which is also a long glowing thing, and I figured meh... close enough.


The first thing I noticed was that the way Blender looked in the tutorial was very different to the way mine looks, which was a bit of a shock. Although Blender is constantly evolving its interface hasn’t changed in years. In fact it’s usually possible to follow along on a new tutorial with an old version of Blender precisely because the interface doesn’t change so often. If I wanted to follow the tutorial there was no alternative but to go visit the download page and grab the newest version, which right now is version 2.82a.

I’m not sorry I did because I have to say that the new look is absolutely beautiful. It is the most enormous change to the Blender interface I can remember, and it makes the whole thing just look great. This software has been an unbelievable gift to the 3D community for many years, but now it looks like it has taken a step into the future.

There are, however, disadvantages to updating software, and one of the most significant is that it can really mess with your workflow. Using this new Blender has really slowed me down. Everything is so different that I couldn’t even work out how to switch on all the layers I’m using o do a render.

It turns out that’s because Photoshop style layers have been replaced with something called collections. Luckily the new system is backwards compatible so my scene layers were automatically converted into collections a soon as I opened up the file I’m working on. These collections are now organized by using drag and drop, which is nice and intuitive and I soon got the hang of that, and then moved to actually creating the glowing exhaust plume that I had started out this session wanting to achieve. I sculpted a long streak coming out the back of the spaceship, and when hat was done it was time to make it glow.

Following the tutorial I simply toggled a switch to make this streak-shaped object emit light. Once I had turned up the emit number to produce a nice radioactive looking object I moved on to giving it a halo of light, and that always used to be the hard part in previous versions of Blender. I used to do it using particle systems and other kludges, but now in this shiny new version of Blender there is a single button to do this. The button is called bloom and it makes a very satisfying glow.

The rendering of the glowing object in the Blender interface is also great. The process of making a model, before even rendering it, never looked so great before. It all looks so nice, in comparison to the austere, office-database-application-type interface Blender had before, it is almost like playing a video game. After a little work I got an object that looked like the light saber blade from the tutorial, but then I changed my mind about using it. The results looked too solid, so instead I decided to try noodling around with a transparent object with a light shining off it. In previous versions of Blender transparency was always very easy, but in the new version it has gotten a lot harder. Well, not harder, but more fiddly. 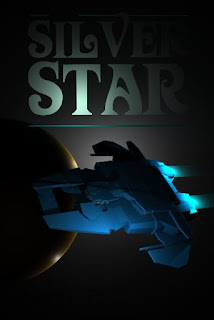 The settings are a little complex, but the transparency does work and you can see it in the interface. That was never possible before, as far as I can remember. Then I illuminated this transparent object with a simple spot light. I was quite happy with the results, so that was enough for one day. It is hard to overstate just how much time even a relatively simple thing like engine glow can take in a 3D application, but it is fun, and even more so now with Blender’s shiny new interface.

To end, just a reminder that the best way to support this blog is to buy one of my books. Simply go over to Amazon, or Kobo and get one.
Labels: 3D ebook covers