A game system for Cthulhu 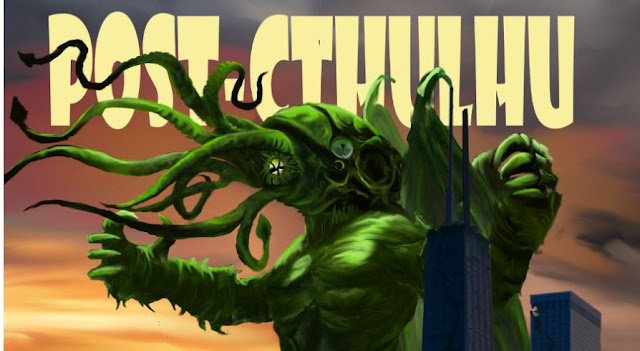 Before I turned most of my attention to writing books, such as Death Sense, I started out by writing tabletop role-playing games. When I started playing, when Advanced Dungeons and Dragons was king, and there were only a handful of other RPGs challenging it for attention. One of those games was the Call of Cthulhu, a horror role-playing game based on H. P. Lovecraft's story of the same name and the associated Cthulhu Mythos. The game was published by Chaosium in 1981. I enjoyed playing it back then, and then engaging with the books it was based on. Obviously there is a huge caveat, and that is the writer of the original books was a terrible racist. But the fantasy elements, the Cthulhu Mythos, of the stories, divorced from the author’s objectionable views, are fascinating. 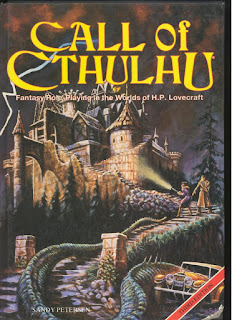 The mythos consist of the settings, tropes, and lore that were employed by Lovecraft and his literary successors. An ongoing theme in Lovecraft's work is the complete irrelevance of mankind in the face of the cosmic horrors that apparently exist in the universe. The stories make frequent references to the Great Old Ones, a loose pantheon of ancient, powerful deities from space who once ruled the Earth and have since fallen into a deathlike sleep. Lovecraft embraced the philosophy of cosmic indifference of an uncaring universe.

If you are enjoying reading about a Cthulhu apocalypse , you may well enjoy reading Death Sense:

The cities are first to fall, huge urban centers like San Francisco descending into chaos in just a few days, but this book takes place in the coastal redwood forests of northern California. As each of the last bastions of society crumble, the people of the area must more and more confront the possibility that they – and other small groups in the hinterlands around the globe – are the last humans in the world. Death Sense is a novel about the constant battle against the end of the world brought on a tide of zombies, but there is also space for human relationships. People who would never otherwise meet are forced together, and their feelings are felt intensely, sometimes hate and sometimes love.


Like I said, I enjoyed playing games based on the Cthulhu Mythos back in the 1980s, and I enjoy writing games based in the same setting now. One thing I have recently been thinking about however, is a lot of those games have been written for FATE Core. The thing is I'm not convinced, any more, that FATE is a good fit for such a game of cosmic horror. I'm starting to think that it might just be a little too cinematic. RPG Geek says of Fate Core that: Fighting, traditionally determined by an intricate web of different rules, is pretty cinematic in Fate Core. It's a basic contested skill roll.

For a gritty setting, like the world of Post-Cthulhu, it seems to me that using such a system would lead to a game that has more wham-bam action, like Mad Max: Fury Road rather than the grimness it really requires. One of the first stages of designing any new game is to decide what game system it is going to use. Of course, I'm not the only RPG enthusiast to muse on the question of what is the best game system to use for Cthulhu-related shenanigans. This RPG Net forum discusses D20 for Cthulhu, among others.

Nemesis is also mentioned for Cthulhu in the forum, and is specially recommended for its mechanics for player characters loosing their mind. Also, the text is available under the Creative Commons Attribution, Share Alike License, which is a great advantage for use in a game that is intended for commercial sale.

The question of which game system is best for Cthulhu is also discussed at Reddit. A point made on Reddit is that there are two ways to go with Cthulhu: Pulp means your game feels more like "The Mummy" or "Raiders of the Lost Ark". Purist means everyone dies or goes insane.

This is the main question when considering the tone of a game that employs the Cthulhu Mythos in any way. The Post-Cthulhu game I wrote is a setting where the hero's have already lost, where the world has already been destroyed. It just doesn't seem like the sort of setting that should have a pulp-type system. One of the concrete suggestions on the Reddit thread is Tremulus. I checked it out, and it sounds like a fascinating game, but as RPG Net says: The default year for Tremulus is somewhere in the 1920s or early 30s (the gear doesn’t have cell phones or chainsaws for example), and this means that it isn't a good fit for a modern world game, even one set after the fall.

Luckily Reddit has lots of suggestions for post-apocalyptic gaming as well. This discussion, among classics like Twilight 2000 and Aftermath!, led me to Powered by the Apocalypse, which turns out to be the game system behind Tremulus. I was extremely interested in this system, but I couldn't initially work out what it was. Usually if you type in the name of a game system into Google, a link to a PDF will appear, often available through RPGDriveThru, but in the case of Powered by the Apocalypse this didn't happen. 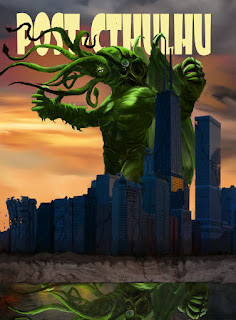 I did find an introduction to Apocalypse World at NerdWerds I was very intrigued, but I realized, in the end, that this game did not suit the gritty style I was going for. One player of the game compared the action to Pulp Fiction and Kill Bill, the very definition of Hollywood pulp action. After discounting Apocalypse World I was very much leaning towards Nemesis as the game system at the core of the game, but the fact that the other Cthulhu games I had written used FATE in the end persuaded me to stick with it. This way it is possible to switch from one game to another without having to switch game system. Present day Cthulhu is based on Fate Core and is available at RPGDriveThru, as is Cthulhu in Space, Cyber Cthulhu, and even Cthulhu in a medieval fantasy setting, making the games ideal for switching time periods, for those characters who are capable of time travel without losing their minds, so Post-Cthulhu should stick with the same system.

To end, just a reminder that the best way to support this blog is to buy one of my books. Simply go over to Amazon, or Kobo and get one.
Labels: RPGs