I’m working on the cover for the latest installment of my Dark Galaxy series. I often work on the story and the covers of sci-fi my books at the same time because I create the cover images in a 3D application called Blender, which is a complex and time-consuming process, at least the way I do it. Today I’ve decided to work on the spaceship’s color scheme, which is one part of the process that brings me great joy. 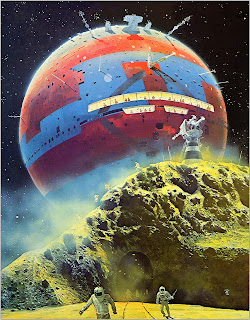 There have been many fashions and trends in spaceship design and color schemes over the years. In the 1930s, the Flash Gordon movie serials presented streamlined silver rocket ships that looked like Airstream travel trailers with the same distinctive rounded and polished shape. The look of the trailer also dates back to the 1930s and is based on designs created by Hawley Bowlus, who had earlier overseen construction of Charles Lindbergh's aircraft, the Spirit of St. Louis. Later, in the early 1950s, the flying saucer really gripped the public imagination, but retained the same silver look. 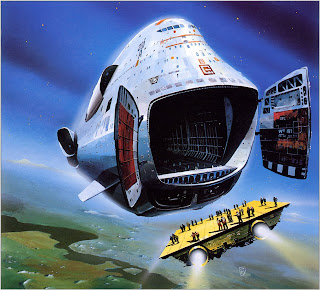 Spaceships only became colorful in the Sixties, with the white, blue and green ships of Star Trek. The gleaming white of the Enterprise was an influence on other TV sci-fi shows such as Blake’s 7, where the liberator was a gleaming enamel white, with almost luminous green rear section, but the show was also influenced by a 1970s blockbuster called Star Wars. Star Wars for the first time depicted a lived-in universe, with battered looking spaceships with carbon scoring and chipped paint. The Millennium Falcon wasn’t painted at all. It was the gray of bare metal, as was the Nostromo from Alien. 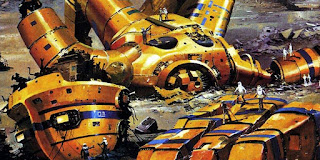 But as movie spaceships became more drab in the movies, on the covers of sci-fi novels spaceships were gaining harlequin coats of many colors. And the greatest exponent of this trend was Chris Foss. He drew the interior line-art illustrations for The Joy of Sex in 1971, but these pencil draings are far from the sexiest thing he produced. His spaceships are much more atractive. Foss went on to become a legendary sci-fi artist, starting with his painting of an alien rover for a 1971 edition of Arthur C. Clarke's Earthlight. He went on to create cover images sci-fi classics including Asimov's Foundation series and E. E. Smith's Lensman series, as well as books by authors like Philip K. Dick, A. E. van Vogt, and James Blish. In his heyday of making sci-fi book covers, Foss at one point averaged three per week. It is the art of Foss that I have sprinkled through this post. 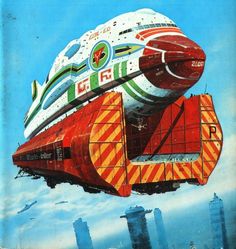 He painted huge war machines among decaying piles of wreckage o desert alien planets, which are awesome, but not the most amazing thing he produced. He also painted colorful starships, including the designs for an interesting Dune adaptation that never happened, helmed by director Alejandro Jodorowsky. Tastes continue to change, of course, and the Foss look has given way to the digital art, but that doesn’t mean that starships created in 3D applications can’t be colorful, too. So I have decided to give the spaceship on the cover of Silver Star (which is a boring and uniform blue at the moment) a striking color scheme, of perhaps yellow and red, or sky blue and cherry, something like that. 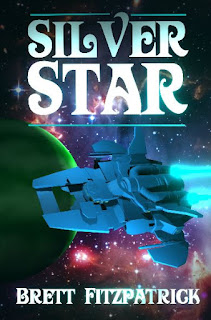 I will be helped in this task by  a nifty feature Blender has called Background Images. By directly importing an image into the work space, I can easily use it as reference. I needed a nice reference iage of a striking pattern of colors so, before going to Blender, I fired up GIMP to create an abstract pattern of colors that I liked. 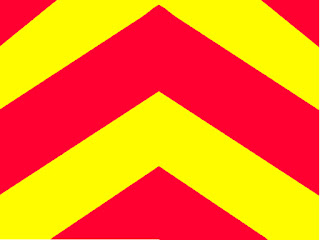 I knocked up a chevron pattern of red and yellow that I thought might work, ready to load into Blender. But when it came time to put my colorful chevrons into Blender as a background pattern I realized I didn’t know how to do this. So off I went to Google to learn how, and it at first seemed to be a lot easier than it used to be in earlier versions of Blender. 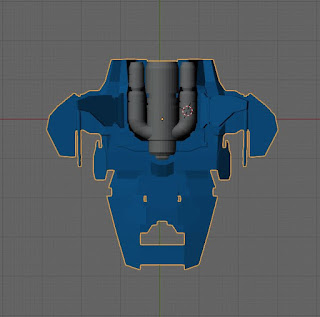 The first complication is that you can choose between adding either a background image or a reference image. I figured what I wanted was a reference image, because the background of the cover is a sea of stars, so I selected the button accordingly, but that is not what that choice is about at all. 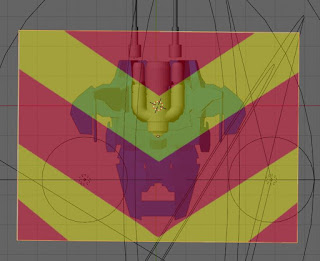 It turns out the first guide I read didn’t go far enough, and background images are a lot harder than they appeared to be. I had to watch a tutorial to really get to grips with it. And I still had to mess around randomly with settings before I truly got the background image acting the way I wanted it to. 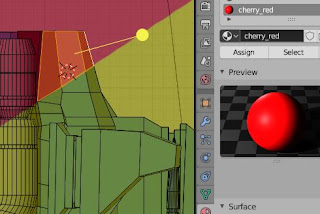 After all that I didn't have much time left in today's cover art session, and even following the background image, adding the chevron pattern to the spaceship is a long and involved process. I ended up switching the computer off for the day with only a fraction of the work done. I hope I like it when it’s done.

To end, just a reminder that the best way to support this blog is to buy one of my books. Simply go over to Amazon, or Kobo and get one.
Labels: 3D Book Cover Designer