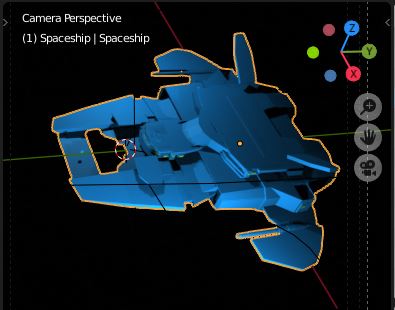 I’m working on the cover of Silver Star again today (book six in the epic Dark Galaxy series, and already shaping up to be a ripsnorter, if I do say so myself). The cover is going to be a spaceship when it's finished, so the best software to create it with is Blender, in my opinion. Some like to paint spaceships the old school way with an brush (pig bristles, airbrush, or digital) but for me 3D is the best way to go. Anyway, as usual with a piece of software as complex as Blender, I pretty soon ran up against a problem that I didn’t know how to solve. 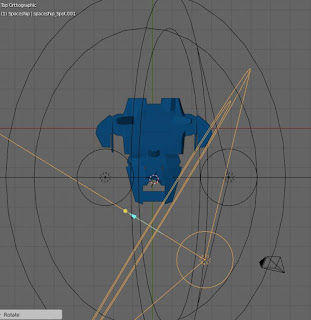 My problem was the lights. The thing is, even in a scene with just two or three sources of illumination, it soon gets busy because each light is represented by a gizmo consisting of a dot for its source point, a circle round that for its radius, a line coming out for its distance, and two more huge circles for its angle. I wanted to hide all that crap so I could see my spaceship model without looking through a forest of black and orange lines. Unfortunately there didn’t seem to be an option to hide ONLY the light gizmos. 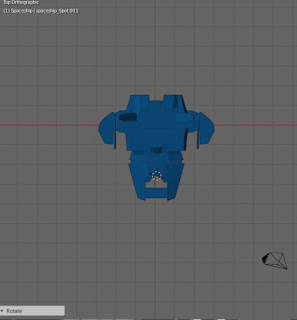 If you uncheck visibility (represented by a little eye symbol) for the lights the mess does indeed disappear from the 3D view window, but the lights also get deactivated, which means they stop lighting the scene.  That's not ideal because one of the huge advantages of Blender is that you can see lighting effects in real time. 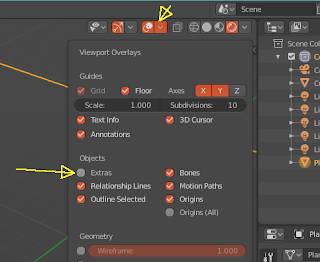 I had to Google up the solution. It turns out there is an option where you can go to the overlays menu and uncheck extras, which isn’t super intuitive. It’s also not ideal because although it does clean up all the mess from the light gizmos, it also cleans away the camera position as well. In short, it’s a kludge but I guess it works well enough for the moment.

So, with the box unchecked it was time to move on to actually working on the spaceship mesh. I want it to be a cool starship, with the looks of the latest, prototype, bleeding-edge design, and after searching for a solution to my lighting problem, Google was right there in front of me. Suddenly I couldn't resist a swift look around for ideas and inspiration, so I typed ‘cool starship’ into a Google image search. First I got a Pinterest result for the starships of Star Citizen, which is described as an immersive space opera game in which players have a parallel life. Apparently 200 teams worked on designing spaceships for its persistent universe in a worldwide contest. 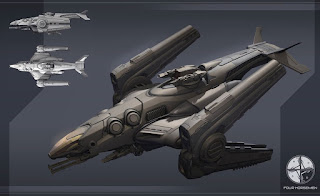 They are inspiring, but so near-future looking that they most resemble slightly bloated VTOL aircraft. I want my cover spaceship to look a little bigger and more powerful than this, so I kept searching for inspiration. 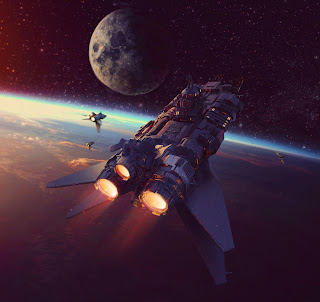 The next result that caught my eye was also from Pinterest, which seems to have infected Google’s image search results like an evil fungus. It is not unusual to see a search query return staggering numbers of consecutive Pinterest results, four or five at a time. The other day I even searched for Goethe quote, and the top result for a literary quote was Pinterest. I clicked it without looking at the website I was going to be taken to and was very surprised to be presented with a cheesy inspirational poster instead of a scholarly article. I've heard that sometimes a site's own content will be posted on Pinterest by someone else, and Google will rank it above the actual, original source of the content. My guess is that showcasing all this crap from Pinterest is a way for Google to crowd out legitimate sites by serving Pinterest's crud instead. Anyone who wants to rank in Google almost has to pay Google to be in Adwords, or languish outside the Pinterest-populated top ten results.

Annoyed with image search, I gave up, stopped procrastinating, and got on with some work on the spaceship. It started out quite blocky, but with an interesting nose, and I already quite liked the side wings as well. From that starting point, I did hours of work. I repositioned the upper set of 'wings' of the spaceship, tidied up the geometry of the mesh (a bit), and added some honking great engines on the back, and yet it hardly looks like I did anything at all. I suppose I will have to just keep on making little changes, until it’s done. 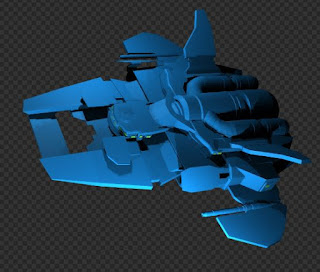 One of the next changes I think I'll make is change thee hideous blue color I've got assigned to the mesh at the moment. It might be time to start thinking about a color scheme. To end, just a reminder that the best way to support this blog is to buy one of my books. Simply go over to Amazon, or Kobo and get one.
Labels: 3D Book Cover Designer