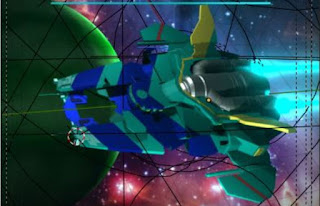 This post is another update about the progress of my new book, which will be book six in the very successful (by my standards) Dark Galaxy series. I am working on the story and the cover at the same time, and today it was time to do a little work on the cover. The cover of an ebook is at least as important as the story, if not more so. Sure, a lot of the promotional work that used to be done by a printed book’s cover, such as endorsements, blurb and subtitles, is now taken over by the ebook metadata but you still need a bright, interesting image to catch the attention of the reader and hopefully make them want to buy the book, or at least learn more about it. I noticed just how important the cover art can be when I changed and improved the image on the cover of the Dragons of Westermere Box Set and the sales took off in a way they never had before.

Like most self-published writers I don't have the resources to hire cover-art designers, but I do have a degree Graphic Arts and I do love using 3D software to make spaceships. That’s pretty much how the Dark galaxy series got is signature cover style, you could even call it a brand, which is old-school sci-fi lettering with a nice spaceship done in a 3D package (the software I use is called Blender, and it is amazing, open source, and free). 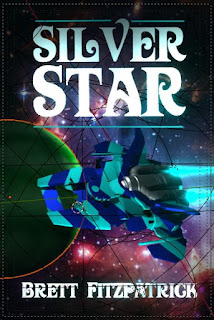 Right now I’m working on the color scheme of the cover, and I am still not at all sure about the paint job on my spaceship. At the moment it is decked out in an attractive pattern of chevrons in two different shades of blue. It looks pretty but I’m not sure it looks at all ‘realistic’ or that I even I like it that much. In fact, choosing spaceship color schemes is simply not one of my strong suits, or to put it another way it is something I am really going to have to work on and improve. That’s something I need to do though, because I want to keep writing sci-fi novels, which means I have to keep creating spaceship covers, and making them look good, including the colors. 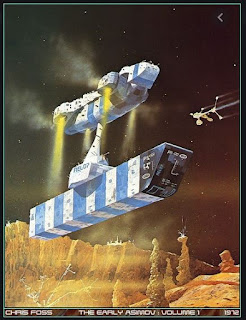 One way of learning a craft (and spaceship design is a true craft, if not an art form) is to look at the work of masters of the art who have gone before. And, of course, the name that springs to mind is – as quickly as Warhol for Pop Art or Braque for Cubism – is that famous master of spaceship imagery, Chris Foss. 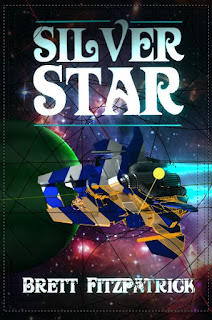 I went looking for a Foss color scheme that was similar to mine and I found an image where Foss had used a pattern of white and blue stripes. I copied that, turning the darker of the blues I had chosen to white, and that did make a difference for the better, I think. I still wasn’t happy though, so I kept looking for something similar but more realistic, which is when I found a very nice example of a spaceship design developed by Foss with just the color scheme I wanted. It is a famous spaceship named the Interstellar Queen. It has quite a large write up on the TTA website, where it says: Anyone who has visited a major spaceport will have seen the distinctive and elegant shape of the world's most advanced spaceliner poised for its next journey into deep space. The Interstellar Queen is the most recent of the Queen Line ships and the only one designed to operate between the stars. It was introduced in 2046 to meet the growing demand for access to Alpha Centauri, following the Trade Agreement signed with the inhabitants of the double star system in 2039.

It is quite an evocative description, and the Interstellar Queen is a spaceship that you never forget once having seen it. Some even say it was an influence on the design of Firefly. The Interstellar Queen has been around so long that undoubtedly it was, at least perhaps subconsciously. 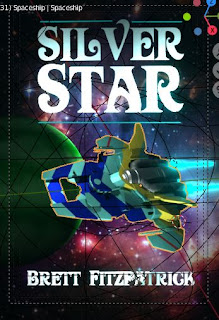 In the image, the spaceship has a variation of the white and blue color scheme, but it is a little more complex and abstract. I have decided to try and adapt that to the spaceship I’m designing. So that is a dark color at the back, a deep blue block, light blue, then pale yellow, then back to light blue, a pale stripe of red, then light blue, dark blue and light blue again. 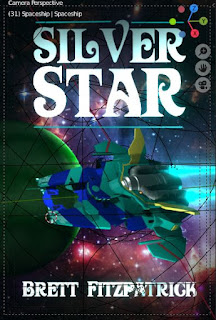 I applied that and it worked pretty well, but there was a lot of yellow, so I started tweaking it a little, and I was then very happy with the results. The color scheme of the spaceship, the Silver Star will undoubtedly change further as the cover evolves but, for now, I can live with it. 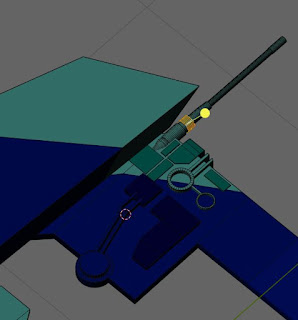 With the spaceship paint job decided,  I also started to do some work on the greebles. What are greebles I hear you ask, well according to Wikipedia a greeble (or nurnie) is a chunk of fine detailing added to the surface of a larger object that makes it appear more complex, and therefore more visually interesting. It gives the impression of increased scale. The detail can be made from simple geometric primitives (such as cylinders, cubes, and rectangles), or more complex shapes, such as pieces of machinery (cables, tanks, sprockets). Greebles are very often used on models or drawings of fictional spacecraft in science fiction.

A great example of greeble application is the Battlestar Galactica model for the original 1970s series, which featured on its hull pieces from a wide assortment of kits, including Apollo orbiters, Saturn rocket boosters, F-16 fighter jets, and various tanks. The term ‘greeble’ came from the special effects team working on Star Wars, before they were Industrial Light & Magic. They also described this design method as ‘guts on the outside’. The alternate term ‘nurnies’ was coined by people working on the Babylon 5 series.

Theoretically greebles can be generated automatically to avoid the time-consuming process of manually creating them. Making greebles is tedious, repetitive work, and is probably best suited to automatic, software-based solutions. I, however, am going to be doing this noble work by hand. Fter a few hours searching on Google and messing around in Blender I was very happy with what I had achieved in evolving the cover to where it needs to be to do its important job of getting eyeballs on my book. To end, just a reminder that the best way to support this blog is to buy one of my books. Simply go over to Amazon, or Kobo and get one.
Labels: 3D Book Cover Designer