Galaxy Dog drops as an audiobook 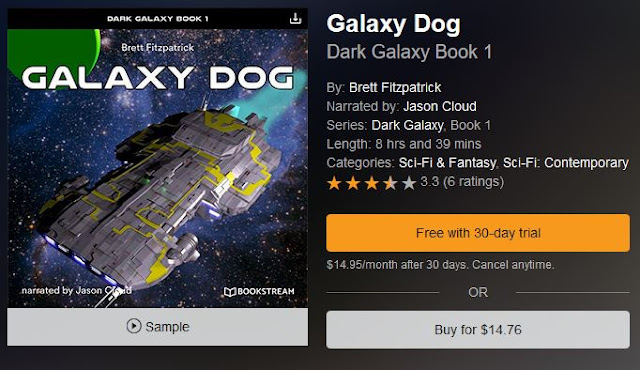 Audiobooks are, as ever, enjoying rapid growth, and look set to prosper with the continued uptake of smart speakers such as Google Home and Alexa’s Echo, which comes preloaded with a free audiobook). The rumor mill suggesting that Spotify might well also be working on its own smart speaker. All this means approaching 25% of Americans now listen to audiobooks, and they are becoming a real and distinct subculture of readers. And now my books are part of it. Galaxy Dog is available on Audible.

Galaxy Dog is the first book in a series of sci-fi novels called Dark Galaxy.

The entire series has been available as a physical book and an ebook to buy from Amazon for years, and it is now an audiobook, too.


Amazon can take a lot of credit for growing the audiobook market through Audible, but the next step that really grows the audience may come with streaming. Spotify has tens of millions of subscribers, as does Apple Music, and new kids on the block such as Deezer and Amazon Prime Music are growing rapidly too. When you think of Spotify you think of music but that might be about to change. Streaming may be set to transform the audiobooks market, and now Galaxy Dog is there, too. 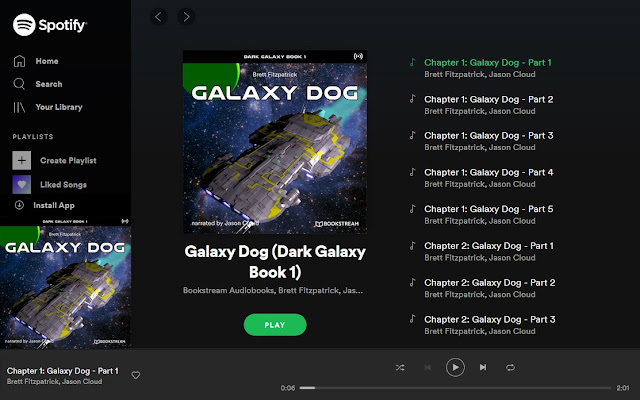 I’m excited about seeing my book become available through streaming, and there are reasons to be very hopeful of success. Some publishers who have already made their catalogs available on music streaming platforms are now receiving up to 30% of their digital revenues through streaming channels, at not much extra effort. Technically speaking Audiobook titles are a little different on streaming because they are snipped into smaller chunks, of two to three minutes in length, so that books can be monetized in the same way as music tracks, but the listening experience is pretty much the same. Actually finding the books can be a little tricky because there are a lot of public domain novels by the likes of H.G. Wells and H.P. Lovecraft (along with a lot of Doctor Who), but I expect that to change as Spotify evolves to exploit audiobooks better. 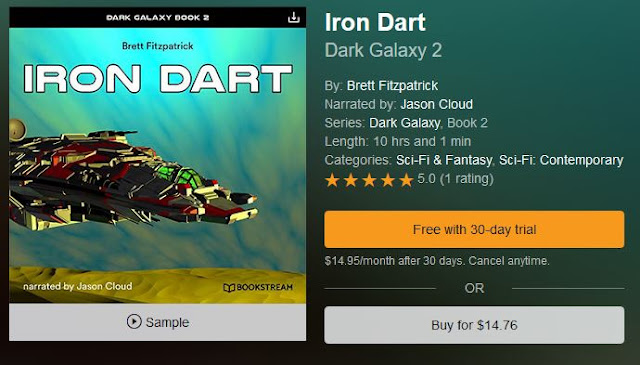 The entire Dark Galaxy series will eventually be available as audiobooks on Audible, Spotify, and a bunch of other places. Galaxy Dog has already dropped. It has been available since February 17th 2020 on all streaming platforms. Book two, Iron Dart, launched on March 23rd and book three, Sun Chaser, is coming soon. It has already been recorded and is currently in post-production. Book four, Drifter Prime, will take a little longer, but if there is no delay because of Corona it should be finished by April 15. Audible takes a few weeks longer to publish, so the audible release is usually about two weeks after the streaming release. I don’t yet have a lot of data about my listeners, but a surprisingly large proportion of them seem to come from Iceland. I guess audiobooks through streaming is big in Iceland for some reason.

Anyway, the ripsnorting sci-fi action of the Dark Galaxy series is now available on audiobook, so you can listen to the adventures of Altia, Knave, and Jay anywhere. Be transported away to a galaxy of adventure, and you can listen on a loop without anyone knowing. As an audiobook, it’s not just my words that make the experience, there is the extra dimension of the human voice, with all its subtle nuances of sound, breathing, and tone that make the story sing. You can also focus more on the prose when listening, as opposed to reading, because there is no temptation to skim.

If you have a long commute you can be a total bookworm with an Audible subscription. While doing tasks like driving, walking, or cycling to work and back, audiobooks really pass the time. And there are so many more opportunities to make some extra listening time, while doing chores like cleaning the house, doing the washing up, or walking the dog. A hated chore becomes undisturbed listening time, and you get to cross something off your daily to-do-list.

Audiobooks are also the perfect way to ease yourself into sleep. A book is a good distraction from whatever is going on in your daily life that is preying on your mind and stopping you from dropping off. Audiobooks, especially sci-fi and fantasy with its far away worlds, a universe away from ordinary life, or the perfect fix for chasing away those everyday concerns. So come aboard the Galaxy Dog and allo yourself to be transported away to a galaxy of adventure.

To end, just a reminder that the best way to support this blog is to buy one of my books. Simply go over to Amazon, or Kobo and get one.
Labels: audiobooks Dark Galaxy