Back in 2018 The Mary Sue - a fun source of nerdy goodness, with an emphasis on diversity and feminism - was talking about The Handmaid's Tale, and about Trump. The reason I want to revisit that article after a couple of years have passed is something it said about Serena Joy Waterford, a character on the show. 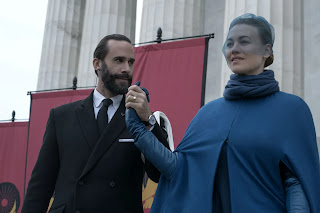 On the show, Serena Joy Waterford is a former televangelist who has had her fame and power taken away. What the article says about this character’s predicament, and what it teaches us about current American politics, is quite thought provoking. It starts in a very relatable way, with something I think we have all wondered about:

The 53% of white women who voted for Trump in the general election. Who are they? What were they thinking? As a white woman myself, I continually found myself at a loss to reconcile what the fuck happened to make these women vote for an openly misogynistic pig who gleefully bragged about sexual assault. What self-respecting woman in her right mind would condone this behavior? Then I started watching The Handmaid’s Tale and realized the truth. The 53% were, quite simply, Serena Joy Waterford.

Serena Joy is complicit in the system that has stripped her of her power. She was an Ann Coulter-style author and public speaker. She pushed a right-wing agenda and wanted to completely transform society. By the time the show starts, she and her allies have succeeded in bringing about that transformation, but with ramifications for her she couldn't possibly have predicted.

A Message from the Author
My newest book, written with Barbara Stanzl, is Forever Young:
Forever Young is a modern take on a classic Gothic novel, combining horror, death, and romance. It is firmly in the tradition of the most famous books of the genre but it is also something new. The book introduces us to Jasmine, a student of anthropology, newly arrived in Venice, and to Violetta, who is trapped in an ancient and violent world with no escape. The two meet and Jasmine gradually awakes in Violetta the desire to escape. 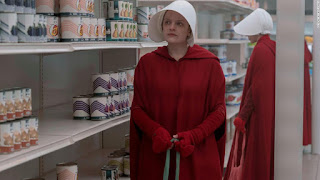 There are obvious parallels between Serena Joy and the white women who voted for Trump, and therefore helped him squeak into the White House via the back door provided by the Electoral College. Just as Gilead wouldn’t work without the complicity of the wives and the aunts, Trump wouldn’t have won the election without the complicity of that 53%. And they could not possibly have predicted the shit show his clown-car presidency has turned into.

Just Serena Joy thought she’d be the exception, that the new rules wouldn’t apply to her since she was so instrumental to the creation of Gilead. She even had a speech ready to give after the coup, only for Fred to tell her she wasn't going to be allowed to talk.

There was no way back for Joy, but the changes Trump has brought are not as irreversible, at least not yet, and white women can do something about the horrors they helped bring about. Thankfully the orderly communities that surround the nation’s cities have become a deathtrap for Republicans, as college-educated and upper-income women flee the party in droves. This new trend has already cost the GOP its House majority and is sapping the party’s strength in state capitals and local governments across the country.

The dramatic shift is also reshaping the 2020 presidential race, bringing Democrats hope in traditional GOP strongholds like Arizona and Georgia. Some think white women may never vote Republican again so long as the president is on the ballot. The trend has continued in recent off-year elections, in suburbs from Wichita, Kan., to northern New Jersey to DeSoto County, Miss. 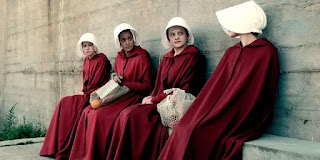 This is not something that is happening in any one place. It’s happening everywhere. The exodus stems not so much from his policies, appalling as they are, but rather the president’s behavior: the bullying, belligerence and insults.

Trump has not given up on the suburbs, and while attention is focused on the anti-Trump animus of suburban women, recent polls show white college-educated men - who tend to focus on economic issues, according to surveys - are a potential bulwark for the president and his party. It is especially true in suburban battleground districts that are likely to help decide the next House majority.

I guess we're depending on White Women to save us, because their men sure aren't going to do it. To end, just a reminder that the best way to support this blog is to buy one of my books. Simply go over to Amazon, or Kobo and get one.
Labels: sci-fi TV