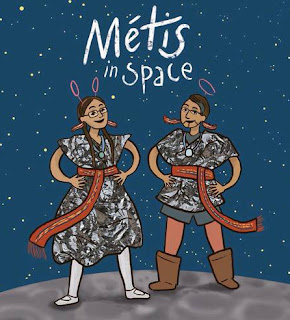 I was just doing some boring, day-job work and needed something to put on in the background and listen to, to help me get through it, and I found a podcast that is entertaining and full of sci-fi goodness. It is called Metis in Space and it sells itself as indigenous, female, and nerdy. The episode that particularly caught my attention was about Dune, and I hit play immediately I saw that sci-fi classic mentioned. Now I’ve listened to one, however, I know I will listen to these hosts talk about almost anything because they have that unplanned, quick-fire vibe I like. The show is billed as them drinking wine, but this episode they are drinking water, I think because they maybe feel they don't need Dutch courage to do the show any more.

The Dune they are talking about is the David Lynch Dune, and they start off by saying they think it is terrible, but the way they say that is the way someone who truly loves it does. They say they usually watch sci-fi with indigenous people, and the tenuous link they come up with is that the planet Dune has indigenous people in the Fremen. The real reason, I soon realize, is that they have both read all the books, at least the ones written by Herbert, not the ones by his son. One of them has read Dune three or four times, and jokes about reading it to her baby.


They start talking about the movie with the obvious stuff. They introduce it as a psychedelic nightmare, and remember how gross it was when they first saw it as kids. They also mention at the outset that they are very interested in Kyle Maclachlan, and they talk about how much he looks like Justin Trudeau. The two hosts are Canadian, and that adds a nice flavor to the show. They also complain that the movie is exposition heavy, and is only a surface reading of the actual Dune books, which is a very valid criticism.

Then they go a bit deeper. They compare the look of the movie to steampunk, which is amazing to an old guy like me. I saw the movie before the steampunk genre was invented, and I would never have thought of this as an example. The design of the technology, to me, is very stylized but the concepts behind it, such as atomics and electricity, is very much traditional sci-fi. But now that they have pointed the steampunkiness of the look out, it is hard to unsee it. They talk about steampunk especially in the scene where the guild navigator is in a tank. And I guess that's a good example, with the old-fashioned look of the translators.

They also compare the spice to petroleum, and repeat the line from the film: The spice must flow. They point out that this isn't subtle, joking about this repeatedly, but I'm ashamed to say I'd never noticed this very obvious parallel before. Shame on me. 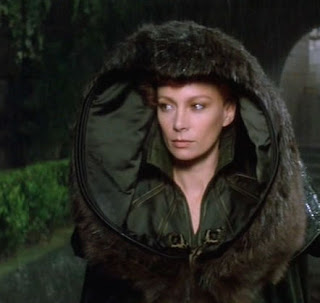 Along with the analysis, they have a lot of fun with Dune. For example saying that Caladan is basically Atlantis, which made me smile, and they irreverently talk about Jess being a willful woman who is too badass to be controlled and who has a boy baby, even though the whole idea of the eugenics program she is involved in is to only have female babies. They also talk about Lady Jessica's fashion, and how they want her amazing fur cloak with its great hood, and the way they jealously talk made me smile as I imagine the chill Canadian rain they must have to deal with. One talks about her glasses touching her hood and getting her cheek soaked, and how a huge hood would make this not happen. 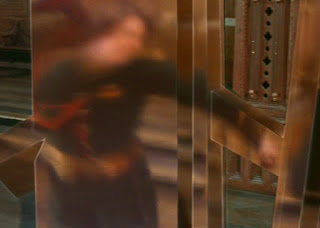 They also have fun with the special effects seen in the movie. They say that the boxy shields seen in a knife fight make the combatants look like Minecraft people, and they find this hilarious, and I laughed, too, but I remember loving this special effect back in the day.

As well as having fun, they also get serious about some of the movie’s more problematic elements. They call Dune Lawrence of Arabia in space, and note how people when the book came out probably weren't familiar with words like Jihad. They talk about old sci-fi where authors picked some random culture, that was considered exotic, and lazily and insultingly transplanted it to space. They recognize this about Dune, and also talk about the distasteful eugenics, but they both still like the book.

They really think about this, in relation to some of the detail of the movie, such as the gom jabbar. This is a weapon, and a test, a poisoned needle set in a thimble, and worn on the fingertip. The Gom Jabbar Test of Humanity is given to Paul Atreides by Reverend Mother Gaius Mohiam. She says: Let us say I suggest you may be human. Steady! I warn you not to try jerking away. I am old, but my hand can drive this needle into your neck before you can escape me.

The gom jabbar test determines whether an individual's awareness is stronger than their instincts. The hosts do not like this idea in Dune about animals being instinctive, and humans being logical. They point out that this preference for logic over instinct is a Eurocentric concept, and again this was something I had never really thought about before.

They also talk about how dystopian this future is, and how when Paul disrupts spice production, billions die. But they do still like Dune. They decide maybe this is because it has something to say about the intertwined roles of religion and colonialism in conquest of indigenous culture.

It is very interesting hearing them point out the differences between book and film. Many years ago, I read the book after watching the movie and all I can remember about the differences is there were no weirding modules, and I thought the Orange Catholic Bible becoming so influential was super weird. The title of the book refers to two types of Christianity, and nothing else. There is no way the whole of Earth agreed to use such a limited range of texts as their holy book.

The hosts go into much more detail than these two differences I noticed. They notice also that the weirding way isn't in the movies, and they say that the weirding modules that replaces it is a cheesy idea, but they understand it as a visual shortcut that works for a movie. They don’t talk about the holy book, but they do point out that the movie hints at a relationship between the worms and the spice, but it is much more explicitly explained in the books. They also compare the outrageous evilness of the Harkonnens in the movie to the subtle evil of the Harkonnens in the book, but they admit that some people find the book slow.

In the book, Paul is a kid and a lot of the scenes make more sense with a kid, because a kid fighting so well is weird, while a grown man like Kyle doing it is not. Also Paul's use of atomic weapons isn't a big deal in the movie, but in the book it shows him throwing off civilization, going full primitive. It is the unleashing of holy hell, which they both find extremely insulting, but – once again – they forgive it because they love Dune. They are such fans of Dune that it is fascinating to hear their very critical take on the movie.

They talk in a lot of detail about the Fremen, and they point out how they are tools. Nothing they do is their idea. They are acted on and acted through, but do not act themselves. The Bene Gesserit have even implanted their legends in the local culture, to allow their chosen one to fulfill them. Paul then becomes a white savior, which is all stuff I wasn’t aware of when I watched the movie back in the 1980s.

All in all, they hate Paul, they hate the movie’s Orientalism, its misogyny, and the eugenics, but somehow they still love Dune and the Toto soundtrack, so they give it their maximum mark of five floating Baron Harkonnens. It’s a fun listen, and I hope the rest of the episodes are as good.

To end, just a reminder that the best way to support this blog is to buy one of my books. Simply go over to Amazon, or Kobo and get one.
Labels: podcast