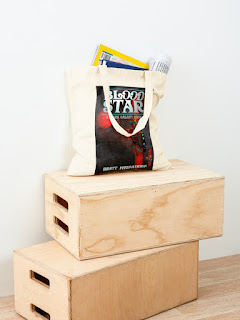 The humble mug and the ubiquitous tote.

I am uploading more merch to Redbubble today, and you might immediately think of T-shirts when you think of merch, but don’t forget the tote bag. The cover image of my latest sci-fi novel, Blood Star, is now available as a nice tote bag. But what is a tote bag?

A few years ago, stylish, young Korean women began visiting a Bloomsbury bookshop in droves. They weren’t interested in the books, they wanted the simple canvas bags by the register. People would buy hundreds at a time. The shop’s nondescript tote had become a thing, and they were just the first. Prestige tote bags are on the rise. Totes communicate a lot about who you are, but in an understated way. After all a tote bag is just a large, usually unfastened bag with parallel handles that emerge from the sides of its pouch. As well as being a fashion statement a tote can, of course, also be used as reusable shopping bags. 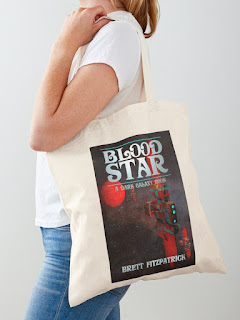 If you’re wondering where its weird name came from, the etymology of the word tote is to carry, which can be traced back to the 17th century. The bag gained popularity in the US during the 19th century and in the 40s, the Maine-based outdoors store L.L.Bean helped to make it ubiquitous. In the 1980s, iconic New York City bookstore The Strand introduced its version of the bag, which is still a staple on city streets today, with over 89,000 Strand totes sold in 2016.

While the tote has undergone many makeovers over the years, it has stood the test of time and won’t be going anywhere soon. They are the ultimate promotional item, so if you’ve ever run a race, donated to a charity, attended a convention or been a supporter of public television, you’ve probably got at least one tote bag in your life. Maybe multiple bags, but you always need more, because they’re good as reusable grocery sacks, but that’s not their only use.

You can use them to sort recyclables, keeps hats, gloves and scarves in, carry stuff to the beach, organize hobby items, or carrying firewood. It’s hard to beat the ubiquitous tote, but there is one item of merch that rivals it, the mug. 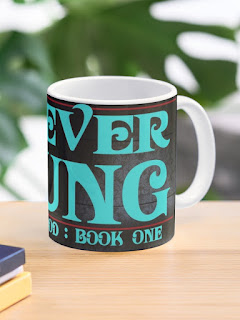 Every coffee drinker has most likely, quite by accident, acquired a coffee mug collection, and it most likely continues to grow year after year. Without even knowing, you wind up with a collection that you might start to take a little pride in, that you might want to keep adding to. 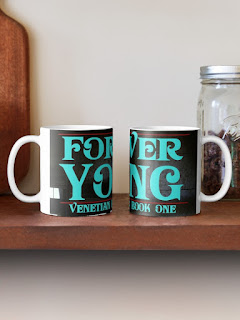 Thankfully, after my efforts today, the handsome Forever Young mug is now available to buy from Redbubble. And the great thing about a collection of mugs is that it is so subjective. You don’t have to worry about whether a mug is collectible. My favorite mugs aren’t worth any money at all, but make me smile when I see them, and I continue to seek out new mugs to add to my collection.

Forever Young is a modern take on a classic Gothic novel, combining horror, death, and romance. It is firmly in the tradition of the most famous books of the genre but it is also something new. The book introduces us to Jasmine, a student of anthropology, newly arrived in Venice, and to Violetta, who is trapped in an ancient and violent world with no escape. After the two meet, Jasmine gradually awakes in Violetta the desire to escape.

Available at Kobo, at Smashwords, and all quality book sites.


My mugs tend to come from comic book stores, and other equally geeky places. They feature superheroes, Star Wars characters and such like, but my favorite, my very favorite, came from a traveling exhibition of Bowie memorabilia and is decorated with just the colorful lightning flash painted on the face of Ziggy Stardust. It was one of the first mugs I bought to add to me collection, rather than to drink coffee out of, but I do drink coffee out of it.

So, if you want to extend your coffee mug collection, why not visist Redbubble and buy the Forever Young coffee mug. It is a beautiful addition to any sideboard and the kickback I get will help me focus on writing instead of the other gigs I need to take on to pay the rent.
Labels: Merch