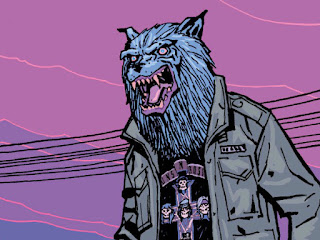 Paper Girls is a comic I have had my eye on for a while, simply because of the wonderful art by Cliff Chiang. The comic book combines this beautiful art with sci-fi elements and a retro setting, much like a comic book version of Stranger Things, which also combines sci-fi elements with its beautifully filmed nostalgia.

The colorist on the title is Matt Wilson, and the color flatter is Dee Cunniffe, and I think they probably play a huge role in how impactful the art is. This is the first time I have noticed this role in the credits of a comic book and the job title of ‘color flatter’ is intriguing  but it is not unique to the art here. A color flatter is a specialist who delineates objects on the page and fills them in with a solid color called a ‘flat’, so that the flats can be selected by the colorist using the ‘magic wand’ tool. Paper Girls won two Eisner Awards in 2016 for Best New Series and Best Penciller/Inker. In 2017, Wilson won an Eisner for Best Colorist in part because of his work on the series.


I was enjoying issue one of Paper Girls until I was a few pages in and one of the paper girls is menaced by a gang of teenage boys. It us an ugly confrontation and some of the language used is very ugly too. The first words out of the mouth of a character who will go on to be hugely important to the story are, “Cool costume, faggot.” This is homophobic hate speech, pure and simple, and it comes from the side of the good guys. When I read it, it came like a slap in the face.

Megan, on WomenWriteAboutComics.com had the same reaction, so I know this isn’t just me. She said: Really, it’s two gay slurs. She not only uses the “f word,” she also calls the same boy “AIDS patient.” Homophobic slurs and even homophobic characters aren’t a dealbreaker for me but I’m sure as hell not endeared to the character. Yes, it’s set in 1988. It was a less tolerant time. I don’t care.

So... I stopped reading for a day or two because I just don’t need this, no matter how beautiful the art is. But I then ended up coming back to the comic book, and the paper girl who uses the unacceptable language is criticized by the one who she rescued. It felt good to see the character who used this language taken to task, even if the bad taste of it still lingered. Anyway, I kept reading. 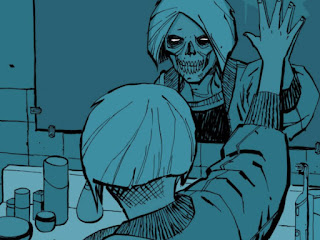 This character tuns out to be Mac, short for McKenzie. She is the first female paperboy in the area and something like a local celebrity. Mac then lights up a cigarette, and I almost groaned. I guess she’s a smoker to show she’s cool. That’s some pretty lazy writing in my opinion.

As I said, the art is gorgeous though, and I can forgive lame writing if the art is good. After the girls ride off, we see in gloomy blue half light a group of figures swaddled in strange black clothes. Then there is a close-up of one of their eyes,  which has a strange pupil, like a shriveled triangle. There are no word balloons or text boxes in this section, just storytelling with images, and it is very nice to look at. I guessed these guys were aliens, but I would have to wait some time to find out if my guess was right or not. 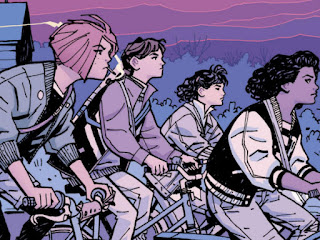 By the end of Paper Girls issue one, I had really warmed to the comic again. It’s great, and it has a lovely twist reveal at the end. It is set up so that the reader will know a little more about what might be going on than the girls themselves do. The whole section of the story told in issue one all happens in one morning, before it gets light, when the girls are delivering newspapers before school starts. This allows the art to use a wonderful color pallet of cool blues, and murky shades of salmon and magenta to show us what is happening. It is absolutely wonderful to look at.

Based on the art alone, I kept reading after issue one, and there is a lot to recommend this story over the long haul. I like that the main characters are all girls, and there isn’t even a token boy among the group. I like that there are often long silent sections without a single dialogue balloon, where the storytelling is all done through images. I like that a story I was expecting to be about an alien invasion surprised me completely in the direction it went in. And there are more good things. 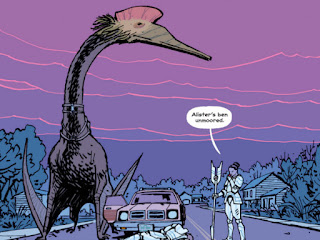 I’m a big fan of dinosaurs, and there are some beautifully drawn examples in this comic book as the story progresses through the issues. I also liked the way the various adults were introduced into the story. They are just as complex as the kids, and their motivations are just as hard to guess. It makes it difficult for the kids to know who to trust, which emerges as a big theme in the comic book. The story keeps shifting, and huge events keep happening. Some of the action gets harsh, and the papergirls are often in very real danger, but it never crosses the line into horror.

Something I don’t like is that the attitudes of the girl who is homophobic are given vent to again after issue one, and though she is taken to task again it just keeps happening. I wish the writers would knock it off. It’s an ugly element that tarnishes an otherwise enjoyable comic book. 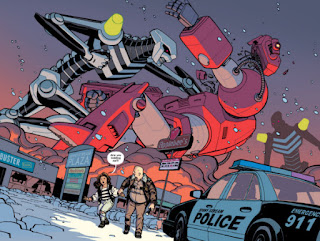 Sometimes the story is arty and confusing, rather than out and out good, but it is never anything less than interesting, and... while I was searching for images to illustrate this post I found one with giant robots. And they look awesome. Giant robots are somehow going to be part of this story! I for one am definitely going to keep reading.