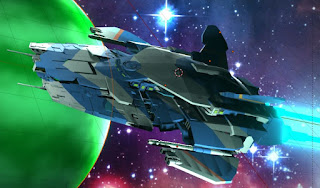 The posts where I talk about working on the spaceship cover are not the most popular on the blog, but is that going to stop me writing them? Heck no. Today what I’m worrying about is whether my spaceship is too flat. There had been some interest to the craft's shape because there was a hole in the nose, but I lost my nerve and filled it in. It just looked weird with a planet showing through. That left a spaceship that was as flat as a saucer and almost square, apart from being slightly pointed at the front. Today, I decided to make huge changes to the form of the spaceship, even though I had already started adding detail to it. 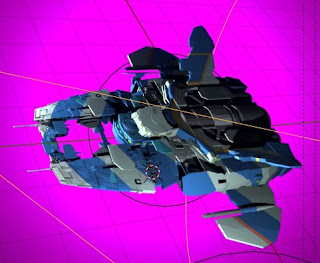 I decided the spaceship needed to be hump-backed instead of flat, and there should be more differentiation between wings and body. I started this process by going to the side elevation window of Blender, where I could very clearly see the spaceship’s profile. I switched off the mirror modifier, leaving only half a spaceship, neatly cut it down the middle, and I regarded its shape. The first thing that jumped out at me was how hideous the engines were. They were enormous, steampunk-like things that look more like locomotive boilers than spaceship engines. So first I selected all the faces in the engines and deleted them.

With the hideous engines out of the way I could now better see some of the messed up geometry inside the spaceship model. But I was strong, and I forced myself not to jump in and start fixing it. It was going to get a lot more messed up after I was done with it. Instead I started adding a new more interesting shape, like a hump chopped out of a sine wave.

When the new shape, which I created in red, was finished it looked kind of like a humming bird to me, and I was quite happy with it, Then all I had to do was move the existing model around until it’s cross section shape conformed to the new red bit. But that was where the real tricky work began. It is easy to give a two dimensional shape the exact profile you want, but a complex three dimensional shape is something else entirely. Obviously I should have thought about what the spaceship would look like from the side before I began creating it, months ago, but I didn’t.

I thought I might have to chop the hull up and move the sections round until they were in the right place, then stitch them together again, but I decided against that. It would just be way too much work, so what I did was extend the new shape sideways, and curve it down until it met the old spaceship shape. That left me with two spaceship hulls intersecting each other, one smooth and red, the other detailed and blue, and then all I had to do was stitch them together. 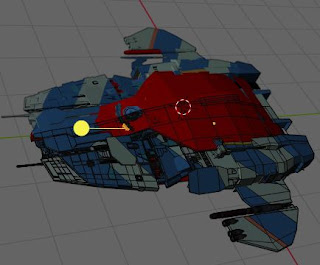 Even after the new section was in place, the spaceship still looked flat and dull, better, but still flat and dull. I decided I would have to make some changes to the plan view as well. For example, I wanted to chop the spaceship’s ass off, and move the wings forward a little.

Those two changes alone made a huge difference, and by accident, almost, the bridge area of the spaceship got a pleasing, armored, clam fish look that I liked, and certainly added complexity. Where before the bridge had stick out like a pill box, like on a surface ship, now it was covered in a curved sheet of armor. It looked more streamlined, and more spaceship like, at least to my eye.

The ship still looked a little flat, even after a few hours messing around with it, so I selected everything except the spaceship and rotated it all to find a view where the spaceship was seen from a more edge-on angle, hiding its broad dimensions. A little like moving a selfie camera around, searching for the angle that hides your imperfections the best. 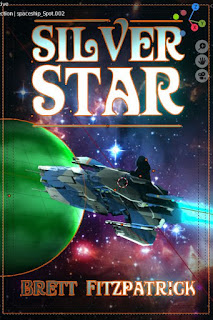 To end, just a reminder that the best way to support this blog is to buy one of my books. Simply go over to Amazon, or Kobo and get one.
Labels: 3D Book Cover