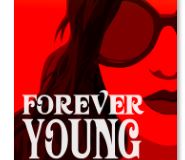 Exactly a year ago my co-author, Barbara Stanzl, and I published a boo called Forever Young, which is book one of the Venetian Blood series. Now, a year later, it hasn’t unfortunately sold as much as we had hoped and so we have decided to change the cover, to perhaps attract a younger audience. The cover we published it with had a very classic look that let the audience know it was set in Venice.

Common advice in designing a cover is to know your target audience and package your products in a way that will appeal to them, but that is difficult in the case of Forever Young, which is quite a quirky book. It undoubtedly contains a paranormal element, and there is a love story but it isn’t paranormal romance. It means having to go with a gut feeling in deciding what kind of cover might work for it. I’m thinking the current covers might be too dark. At thumbnail size, it’s difficult to see and read on an Amazon bestselling category page. It doesn’t ‘pop’. I needed a cover that showed people what was at the heart of this book, which is a mysterious woman named Violetta.

It also needs to look classy, which means no smoldering hottie on the cover, posing against lightning strikes. I think the book needs a much more graphic-art type of cover. So the first task in redesigning the cover was to come up with a concept. The idea for the new cover is that it should very much be red, the color of blood. There should be a young woman in the foreground and a glimpse of Venice in the background.

Once the concept for the new cover was taking shape it was time to capture that idea as an image file. The image file for a book cover should be big, for printing and looking good on modern, high-resolution screens. Amazon recommend eBook cover art should have a height/width ratio of 1.6:1. That means that for every 1,000 pixels in width, the image should be 1,600 pixels in height. To ensure the best quality, particularly on high definition devices, the height of the image should be at least 2,500 pixels. I figured that meant ideal dimensions for my cover file would be 2,560 x 1,600 pixels. 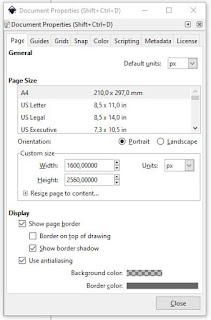 I wasn’t too worried about getting the cover dimensions wrong, however, because I was going to use Inkscape to create an SVG file, which is a magical type of graphics data, called vector imagery, that can be scaled up and down without any loss of image quality.

InkScape is a powerful, and free! design tool used by illustrators, designers, web designers and anyone who needs to create vector imagery. So I fired it up, set the image size to 2,560 x 1,600 pixels (who am I to argue with Amazon) and started drawing with my trusty Bamboo graphics tablet. The one I use is not a professional graphics tablet, far from it, but when I made the purchase it had the huge advantage of being inexpensive, and it has a lime green color scheme, so that’s nice. 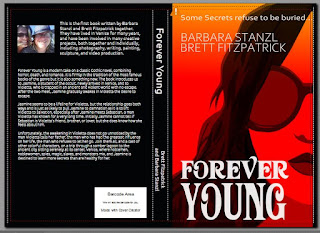 The image I came up with is an extreme close up of one side of a young woman’s face, to emphasize the relationship between two young women that is at the heart of the book. The new color scheme is red, because this is a book that is also all about blood, and then all I had to do was choose a font. I thought long and hard about changing the font to something leaner and more modern, but in the end I decided to keep the Orthodox Herbertian font I have been using on the covers of all my books. It’s a kind of calling card and I think it fits with Forever Yong’s new, more graphic, look.

I was going to be uploading this cover to all the publishers and aggregators who carry it anyway, so I thought it might be a good opportunity to rework the blurb, to give it the some ‘pep’ as the new cover. Here’s what I came up with:

Two young women are thrown together by fate. One, Jasmine, is finding her feet in a new land, the other, Violetta, has been in the same place so long she feels she has taken root, but they both need a friend. Jasmine is soon shocked that such a simple thing as friendship can bring dangers to the surface. Dangers that have been left dead and buried for too long. Dangers such as Sebastian, the mysterious young man that is caught in Violetta’s orbit, but who is he, an ex-lover, a relative, or just a friend? Whoever he is, he suddenly makes Jasmine’s life a lot more complicated, but then the real danger is revealed, a danger much closer to home. Jasmine is soon caught up in ancient mysteries she cannot hope to fully understand, mysteries of the blood.

I uploaded the changes today, although of course it will take a little while for the changes to propagate across all the outlets the book can be purchased from. First I uploaded the new cover and blurb to Draft2Digital AKA Books2Read, which supplies Forever Young to Barnes & Noble, Kobo, Apple Books, Scribd, Tolino, 24Symbols, OverDrive, bibliotheca, Baker & Taylor, and are trying to get it onto hoopla, but they have extremely long publishing times. The changes were very easy and swift to make at Draft2Digital.

Next I went to Smashwords, who distribute to Baker &Taylor’s access 360, cloudLibrary, Gardners,  and Odilio. Changing the cover was almost as simple as one click, and the blurb wasn’t much more difficult to update. And if you buy directly from Smashwords you can get the book with its classy new cover. 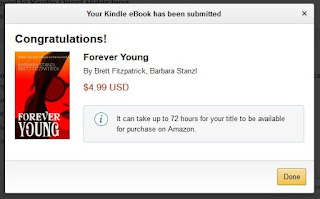 Then I went to Kindle Direct Publishing, where I have specially uploaded versions of the book to be sold on Amazon. Amazon was a more involved process because they do not allow png’s as an upload format for ebook covers , while Inkscape spits out its files in png. I therefore had to go through the extra step of running the cover through GIMP to allow me to export it as a jpg file, which KDP kindly consented to upload. The I had to wait for it to publish before I could alter the blurb. I guess I should have done the two tasks the other way round.

Then, still at KDP, I changed the paperback format. That was even more difficult. The dimensions I had chosen, based on Amazon's advice, did not work with KDP’s cover creator. Luckily I found a site that suggested a pixel count based on the size of the printed book. My book is being printed at six inches by nine inches, so that is 1800 x 2700 pixels. That, for some reason, was still a few pixels short so I added 60 pixels to width and 90 to height, and then it worked okay. Luckily the cover creator allows me to upload pngs, so I didn’t have the extra step of converting them using GIMP. All I had to do then was reposition the text a little to make sure none of it would be snipped off, no matter how haphazard the production process was. Oh, and change the blurb on the back of the book to the new version. And I also changed the author photo to something a little more professional than the beach snap that was there before.

Lastly I went to BoD, which is another aggregator, and they seem to reach a few nooks and crannies that the others don’t. Unusually, however, you have to pay to use their services, so I only have one or two books placed with them. With them I couldn’t change the cover or the blurb. The cover is just fixed and impossible to change and apparently the text I was trying to paste had the wrong encoding. For a paid service, BoD is the worst of the lot by a long way.

So I’m all done (except for whatever dark corners of book selling BoD reaches) and Forever Young will soon be available with its beautiful new cover. I recommend getting it at Smashwords before the end of May 2020 because there is a site-wide promotion, and the new cover is already in place.
Labels: Book Cover Book Cover Designer