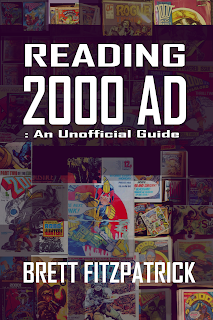 Back in 2017 I was reading prog slogs, for nostalgia, but also for sci-fi fun. It brought me great pleasure, and to my mind it’s no more a complete waste of time than looking at FaceBook's infinite scroll of cat videos and Russian bot posts. The prog gets its name from an ancient British comic book named 2000 AD. It was a sci-fi comic that started in the 1970s, riding the wave of popularity of Star Wars. Instead of calling the weekly comics issues, like any other comic, they decided that their comic would be released in weekly progs. So instead of issue one, 2000 AD starts with prog one. A prog slog is where somebody reads through them all, from cover to cover, with some brave souls even throwing in annuals and summer specials, and the like. It is not something to be undertaken by the feint of heart. A prog slog blog, is where somebody reads all these 2000 ADs, and also blogs about their experiences - mostly focused on how they no longer have any free time and they are slowly losing their mind. This whole thing seems to have been started by the first prog slog by Paul B Rainey.

I write a lot about 2000 AD on this site, thousands and thousands of words in fact, and it suddenly occurred to me that I could copy and paste a bunch of these posts and collect them into a book. Collecting the text, and lightly editing it was quite easy and swift, and creating a cover didn’t take long, either. My intention for the book is that it will continue to grow, just like the section of this website that is dedicated to 2000 AD. Each issue I read, recap, review, ruminate about, whatever you call it, increases the mountain of text I’ve written about 2000 AD by around a thousand words.

For the text, I simply copy and pasted the blog text into a libreoffice document. I had to save it as a .doc for the upload to Smashwords, but at least I’m using open source software. For the book cover, I used GIMP to create a design made up of lots of random 2000 AD covers that I found by googling images of collections that had been up for sale on auction websites like ebay.

Obviously, I’m not doing this for the good of my health, I intend to somehow monetize the book, and the easiest way to do that is to offer it for sale on sites like Smashwords and Amazon. I hesitated for a moment before embarking on this project because the book would include a lot of references to 2000 AD and its characters. The book is my writing, but it refers to intellectual property created by other people. A quick Google search indicated that there were a lot of such books, unofficial guides and the like, available on Smashwords. What gave me pause was the copyright situation.

I’m pretty sure the book is covered under fare use laws. Just to be sure, I ended up reading a book on fair use that I found available on Smashwords itself. The book points out that of course you can’t go using other people’s intellectual property willy-nilly, but there are things you can do. That specifically includes criticism and comment (which is what my book is all about), news reporting, teaching, scholarship, and research (which my book definitely does not do). According to the law, none of what is included in my book is an infringement of copyright, apparently.

The big question is probably the amount and substantiality of the portion I use in relation to the copyrighted work as a whole. This is decided in relation to the entire quoted work, but the law does not offer any percentage or word count to go by. This is because if the portion quoted is considered the most valuable part of the work, even a short quote may be violating fair use. Most publishers provide guidelines for authors, such as 200-300 words from a book-length work. Obviously I can’t reproduce an entire issue in order to talk about it, but I imagine I can include an additional image from each issue, as well as the cover. The relative paucity of images will also keep the file size down, which will make the book easier to upload.

The effect of the use upon the potential market for or value of the copyrighted work will only be to increase the number of people who have even heard about this British sci-fi comic book.

The biggest outlet for ebooks is obviously not Smashwords, however, it is Amazon, so I thought it was a good idea to take a look at what they had to say on their Intellectual Property Rights Frequently Asked Questions page, but it made no mention of fair use at all, so we will have to see how they react to me uploading an unofficial guide.

I did a swift Google search to see if any other books had been written with a similar title to The Unofficial Guide to 2000 AD and nothing came up, so it was time to go ahead and upload the file. The book is now available on Smashwords, and if you buy it there you can download future versions as it grows.