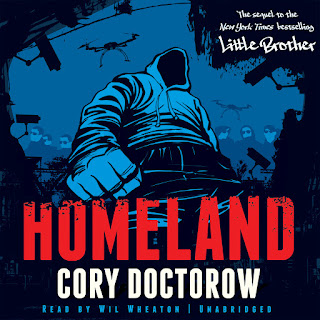 I’m on the mailing list of a sci-fi author called Cory Doctorow, a Canadian-British blogger, journalist, and science fiction author with an interest in liberalizing copyright laws and post-scarcity economics. I got interested in his work because he used to release free Creative Commons versions of his books, and made a convincing case for this increasing the number of books he sold even though the very same story was available for free. I think there is some truth in it, after all here I am, years after coming across his work, still writing blog posts about him and therefore indirectly promoting his books.

Anyway, the email that plopped into my box today sent me to a new Locus Magazine column of his that wasn’t about Creative Commons, at least not entirely. The article does mention The Hacker Crackdown, which was one of the first professionally published books from a major publisher to be released online for free redistribution, more than a decade before Creative Commons launched. The author called it “literary freeware”. However the article is mostly about rules for writers, and that piqued my interest. Like any self-publishing author I have read thousands of words on the subject of rules for writers, but I could certainly read thousands more. Also, I thought it would be interesting to see this sort of advice but with a sci-fi sensibility.


Doctorow starts his article on sci-fi writing rules by mentioning a document I had never heard of called The Turkey City Lexicon, and the huge influence it had on him. He says: the Lexicon loomed over me as I wrote and thought my way through writing problems. When I began to teach Clarion, I assigned the Lexicon as reading to my students and used it in our critiquing sessions. The Turkey City Lexicon is available as a pdf here. He mentions it because in his article on rules he doesn’t actually give any rules of his own, which I felt was a little disappointing, but instead he refers to the rules of the Turkey City Lexicon. He says that a recent insight he had was that the reason these rules can be used so fruitfully to diagnose the flaws in a science fiction story – while being broken with impunity in so many beloved works – is that they aren’t hard and fast rules at all. They’re merely things that are hard to do right.

An example he gives is the sentence: ‘Don’t go,’ she gasped fearfully,’ where ‘gasped’ is a considered a ‘bookism’ by the Turkey City Lexicon, and is against their rules. But Doctorow’s recent insight is that: ...using attribution-verbs other than ‘said’ in dialog represents a powerful temptation to writerly laziness. It’s so much easier to use attribution verbs to tell the reader how your character is uttering them than it is to have the words themselves do the heavy lifting of conveying their mood. Writing dialog whose context cannot be mistaken is hard, but it also makes for better dialog. Substituting attribution for strong dialog weakens a story.

His point is you can do both. You can write the strong dialogue, and use an attribution verb other than said. I found that insight quite convincing, but then he went too far. He started talking in forgiving terms about exposition. He said exposition is ...something I love to read and love to write – when it’s done well. From Stephenson’s Cryptonomicon to Westerfeld’s Peeps, to Moby-Dick, I will happily read intensely technical, intensely interesting exposition all day long. The injunction against exposition isn’t a rule, but a warning: as delightful as good exposition is to read, most exposition isn’t good, and bad exposition is terrible.

Exposition is such a crime, such an overused and endemic pox on the face of science fiction in particular, that I just can’t share Doctorow’s forgiving attitude toward it. In sci-fi, whether books, movies, or TV, it frequently seems as though the writer is less concerned that the audience won't understand what's going on, and more concerned that they might not believe that they have really thought everything all the way through. We are given chunk after chunk of explanation about all the worldbuilding the author has done. Sadly, this often serves the opposite purpose to that intended, making the audience all the more painfully aware that the explanations don't quite add up. If it were up to me, I would have something approaching a hard and fast rule against exposition.

On the other hand, I can see Doctorow’s point that these ‘rules’ are, in fact, checklists of places to start looking for ways to improve the first draft of a novel. I can agree that they are ways to find places where it's likely that you screwed up because this is the stuff that it is hard to get right. As always Doctorow has written an interesting and informative post, though this one is of the bite-size variety, and getting yourself onto his mailing list, if you aren’t already on it, is well worth the effort. (If a couple of clicks can actually be described as effort). And if you want more rules than are to be found in the article, The Turkey City Lexicon has you covered. To end, just a reminder that the best way to support this blog is to buy one of my books. Simply go over to Amazon, or Kobo and pick one out that looks like it might be worth your hard earned spondulix.
Labels: writing advice