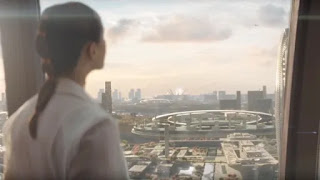 Brave New World was originally developed at Syfy, then shifted to USA, and has ended up at NBCUniversal’s new ad-supported streaming service, Peacock. They have a fairly impressive library of old shows and movies but originals are few and far between right now, with many series disrupted by the pandemic, so they must be hoping for big things with Brave New World.
Unfortunately for Peacock, I haven’t seen any evidence that the show has made a splash with audiences or critics, but I like it. Of course I’m a sucker for sci-fi and I’ll watch any old crap as long as it has robots, rockets or flying cars in it, so me liking it doesn’t guarantee that it is truly a quality show, but let me tell you what it is that appeals to me about Brave New World and you can judge for yourself. 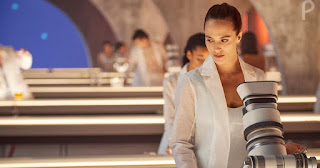 At this point I should also tell you that no matter how hard I try, I just never seem able to avoid sprinkling my reviews of shows with a liberal dose of spoilers. Consider yourself warned.


Okay, down to business, the show is a TV adaptation of Brave New World by Aldous Huxley, a classic of sci fi, but a controversial one. The book was banned in Ireland when it first appeared in 1932, and is also one of the books that Americans most want to see taken off the shelves. Showrunner David Wiener has admitted that he is aware aspects of the novel are dated to the point of being sexist and classist. In 1980 the book was actually removed from classrooms for making promiscuous sex look like fun, and it has been the subject of frequent challenges in the US ever since. Readers who want the book banned protest about its sexually explicit scenes, insensitivity, offensive language, and racism, but Brave New World is, ironically, set in a world in which books are banned. 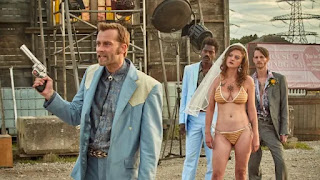 As a quick digression I should point out that obviously I’m against banning Huxely’s original, but that doesn’t mean it isn’t problematic. Just to take one point, the savages of the book are dark skinned and are compared with the blond-haired people in the civilized world, so we get the impression that Huxely thinks white people should be at the top of world hierarchy, no matter what the future brings. Ideas like this are very 1930s and are very much not okay. Thankfully, the show intentionally takes a different tack. The show keeps a version of the caste system of the book but it is also a multicultural utopia. Important white, male characters, such as world challenger Helmholtz Watson and world controller Mustafa Mond, have been gender flipped and then cast as women of color (Hannah John-Kamen and Nina Sosanya, respectively). Huxley’s problematic Native American-styled wilderness preserve, the Savage Lands, has also been given a make over, expanded with a theme park. 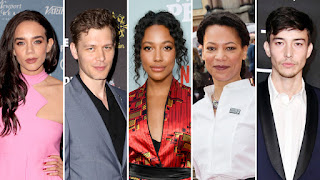 The diversity of the cast helps the show look like the future, and it’s a great-looking cast. You get the impression that a lot of the work done on the embryos in the labs we see in the show is work to make them tall slim and symmetrical of features, even including the troglodyte cast of workers. Their surroundings also look beautiful. New London is a gleaming and wholly plausible architectural paradise, but the fact that it is also a social dystopia is clear right from the first episode. The scenery is gorgeous, the digital work impressively real, but the lives even of the Alphas is shown as brutally superficial and petty. The grand, futuristic architecture is seen in juxtaposition with the constrained bestial lives of citizens, and it works very well.

The citizens have the illusion of freedom, after all New London has only three rules: No privacy. No family. No monogamy. But it is not real freedom, not even the freedom to think or even experience real emotion. The upper classes are forced into a life of pleasure with no privacy, which is to prevent them thinking. If they don’t go out to clubs every night, seeking sexual conquests, they are called in for a talking to by a superior. If they take out their smart contact lens and go offline to spend any amount of time in contemplation, their supervisors become suspicious.

Living like this, understandably, the Alpha characters we meet are loathsome, but their self-interest and double dealing has an innocence to it, and I found it very entertaining. The Betas are intended to reflect a work-hard-play-hard middle-management lifestyle, and they are just as much fun to watch being shallow and badly behaved as the alphas. Jessica Brown Findlay in particular is great. She plays Lenina, a Beta who is less invested in this empty life, and has even been dabbling with monogamy. The doubts she’s having about the life she’s been assigned only become more pronounced when she travels to the Savage Lands. There Lenina meets a roguish stranger, the savage played by Alden Ehrenreich, who challenges her perceptions. The show does a good job of shifting to show the world we see through her new, more critical eyes.

Some have complained that Brave New World is treading familiar ground, but that’s not really the show’s fault. The themes of Brave New World have become a staple of science fiction because they are important themes, now in our world of oligarchs and billionaires more than ever. They are themes that have found their way into a lot of other sci fi and have become quite familiar. In Logan's Run, for example, the beautiful people can’t leave their city, and can only survive past the age of 30 by escaping to the surrounding badlands. In fact a lot of people have said Brave New World is like a much better version of Logan’s Run rather than an adaptation of Huxely’s book.

Zardoz also has savages outside protected cities. Sci-fi is full of such oppressive failed utopias, shaken-up by more savage outsiders. Even Doctor Who has an example of the trope, on Gallifrey the Time Lords’ principal city, The Capitol, consists of shining towers protected by a mighty glass dome. Outside The Capitol are wastelands where the Outsiders live. The Outsiders live a primitive lifestyle, wear animal skins and use weapons like bows, arrows and spears to hunt for food. This is all very obviously taken directly from Brave New World.

Like I said at the outset, Brave New World is old school sci-fi of the kind I really enjoy. There is a lot going on, and it has a lot to say. If you like sci-fi at all, it is very much wort watching. It may not have made the splash that Westworld did (a show a lot of people are comparing it to), but the plot makes a lot more sense and I enjoyed it just as much.

To end, just a reminder that the best way to support this blog is to buy one of my books. Simply go over to Amazon, or Kobo and get one.
Labels: review Sci-Fi Serial sci-fi TV TV