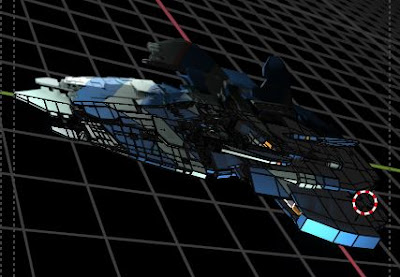 I’m creating a cover for the sci-fi novel I’m writing, a book that will be called Silver Star, and cover creation is a process that takes pretty much as long to do as it takes to actually write the book itself. The reason it takes so long is partially because I create the covers myself to save money. No doubt if I hired a professional to do it, the cover could be finished in a few days, but as a self-publishing author I do not have the budget for that. The other reason it takes a heck of a long time is that I like cool 3D graphics on the covers of my books, and creating cool 3D graphics is intrinsically a long and complex process.


The application I use to create my 3D covers is called Blender, and I never stop singing its praises. Blender is free... yep, you heard right, it doesn’t cost a bean... and it's also open source. It supports the entirety of the 3D pipeline—modeling, rigging, animation, simulation, rendering, compositing, motion tracking, video editing, the 2D animation pipeline, and  putting together cool 3D book covers of course.

Usually – okay, pretty much always – the cool 3D graphics on my book covers take the form of a spaceship. The spaceship I’m creating for the cover of Silver Star appeared in the opening scene of the previous sci-fi novel in the Dark Galaxy series, a book called Blood Star, and the description goes like this:

Chase watched the ship fly overhead, never tiring of gazing at its complex silhouette of multi-directional thrusters, heat vanes, weaponry, and sensor systems. The whole ensemble was organized into a roughly arrowhead shape that was very pleasing to the eye. There were a few areas of damage, but nothing so major that it spoiled the spaceship’s lines. All in all it was an immense source of pride to him.
"The Silver Star," he said to his companion. "Beautiful, don’t you think?"
"It is underpowered for its size," his companion said.
"Have you no poetry in your soul, Rowena?" Chase asked, glancing away from the receding spaceship just long enough to give her a dark look.
Rowena didn’t react except to shrug almost imperceptibly.

So, for today’s cover design session, I just wanted to check that the spaceship I’m creating really does have an arrowhead shape, and does actually does have multi-directional thrusters, heat vanes, weaponry, and sensor systems. To do that, I opened the Blender file I had been working on and switched the view to overhead. 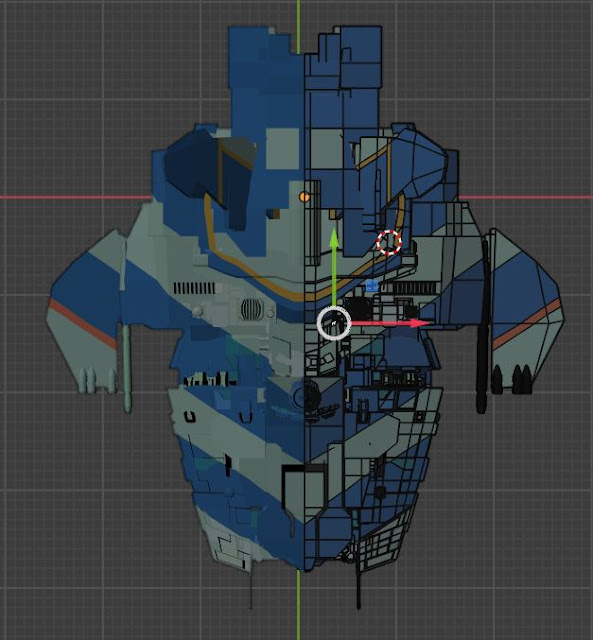 It turned out that the spaceship was shaped more like a blunt trident than an arrowhead, and so, I decided to make some changes. I decided to add a pointy nose, and some more wing-like structures at the back, where the spaceship narrows too much to be called arrow-shape.

For some reason I like to work on my spaceship wit its nose down but it was being presented in the Blender view port with its nose up. I fixed that by ‘rolling the view port’ which is done by pressing the shift key and the number 4 on the number pad. In fact, last time I replaced my laptop I made sure to get one with a number pad because it makes working with Blender so much easier. I imagine a USB numeric keypad would also work, but I have never used one myself. 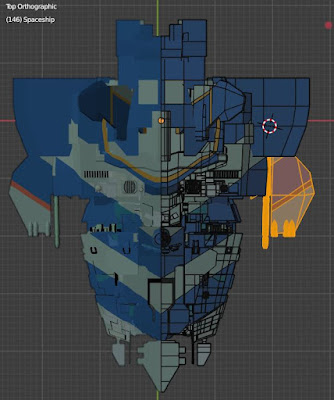 After adding a pointy front and some wings at the back, I noticed the wings I had already sculpted were disrupting the arrow-like lines of the spaceship. They were sticking out like ears, or like the side prongs of a trident. They had to be moved, so I carefully snipped them off by deleting the faces that were connecting them to the rest of the mesh. I then carefully repositioned the wings closer to the spaceship’s spine and canted them up a little, like a pair of open gull-wing doors.

I actually like the new position of the wings very much more than the boring way thy had been sticking out horizontally before, so I’m glad I decide to make sure the picture accorded with the description in the earlier book. 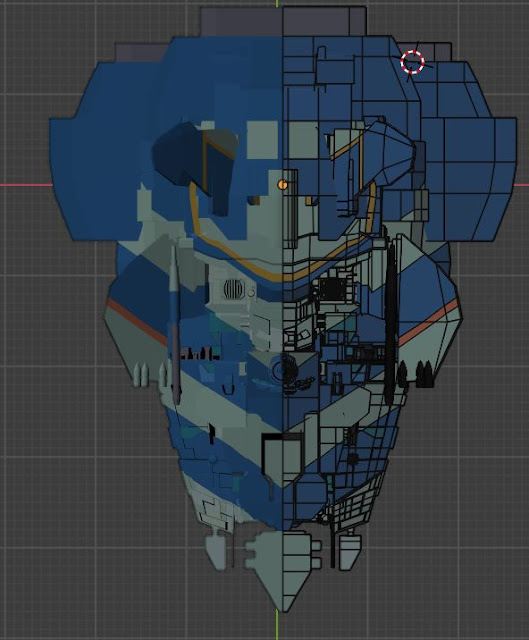 With a little more work on the back, the spaceship really was starting to look more like an arrowhead. Next I decided to move on to making sure their were all the things in the list visible on the hull. There were heat vanes, some weaponry, and some sensor systems, all obvious on the hull, but no multi-directional thrusters. 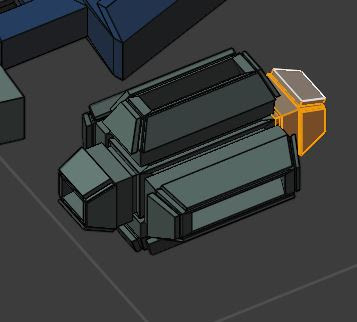 I decided to quickly make one, the work of just a few minutes, and then attach it at different places all round the hull. I’m all for complex little details such as thrusters on a spaceship. They make it look so much cooler and more ‘real’. To end, just a reminder that the best way to support this blog is to buy one of my books. Simply go over to Amazon, or Kobo and get one.