My fantasy of my sci-fi novel getting optioned 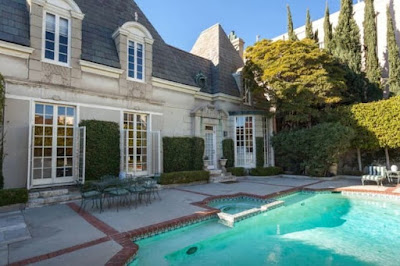 It has been a daydream of mine, ever since I started writing sci-fi novels, that one of my books would be optioned for a movie. In my imagination I would then get a payment of several millions of dollars and my life would be changed instantly and utterly. It is not a hugely likely scenario, I will be the first to admit that. In fact it has a likelihood somewhere in the region of winning the lottery or being hit by an asteroid.

The specific scenario I most often daydream about is one where a Hollywood star buys my book. There are only a handful of sales that are generated by my books most days but I fantasize that one of those sales is to a Hollywood A-lister (or Z-liser, if they have the money) with a taste for sci-fi of the kind I write. Most often I imagine they have downloaded Galaxy Dog and just loved it.

I write sci-fi novels, including a series called Dark Galaxy, which starts with Galaxy Dog:


So the celebrity likes Galaxy Dog so much that he or she wants to option it and make a movie. It could be an appropriate celebrity, such as Henry Golding or Zendaya, or if Hollywood wanted to whitewash the two main roles, maybe it could be – picking a name or two from Vulture’s ranking of Z-listers  – Henry Cavill or Taylor Swift.

Would I really allow my stories to be whitewashed in this way in exchange for a cool million: let’s hope I’m never tested. I’m against whitewashing, obviously, and I wouldn’t want Scarlett Johansson involved in the project, but I also need to pay rent. The most important thing in the fantasy is not exactly which Hollywood star buys one of my books and falls in love with it, the important thing is that there would be enormous pots of cash involved in the deal, and that I would be whisked away to Tinseltown on a private jet to sign the contract. In my mind, this happens by the side of a huge pool in the back garden of some mansion, accompanied by cocktails.

With these pleasant fantasies filling my head, as usual, I was very interested to end up reading an article about how books really get optioned and how much money is usually involved. The title of the Guardian article I happened upon was not encouraging. The story is titled, No aspect of writing makes you rich' – why do authors get a pittance for film rights?

Despite the downer of a headline, the actual article starts with the sort of deals that dreams are made of. And none of the information is a surprise, of course. We all already know that EL James pocketed $5m for the screen rights to the Fifty Shades trilogy, and that JK Rowling got $1.3m for the first four Harry Potter books alone, that Dan Brown received $6m The Da Vinci Code, and Hollywood hurled $3.75m at John Grisham for The Chamber when it was still just an outline. So far so good, but it was then that the journalist started to pour the cold water, but just a sprinkle.

Some stories you might not have heard so much about include Charles Webb, who sold the movie rights to The Graduate for $20,000, which sounds like a lot until you look up what the movie made. The film version of The Graduate grossed more than $100m. Still $20,000 doesn’t sound too bad, I’d probably take that. Next the article reveals that Joanne Harris sold the film rights to Chocolat for £5,000. I was horrified, but that number isn’t the whole story. She also got a nice fat cut of the film’s box office. She got her beak wet for £100,000 of the takings, to be precise.

Apparently Stephen King requests only one dollar to option one of his books as a movie. For him, too, the back end is where he makes real money. He got an eight-figure pay out from the recent adaptation of It. I must remember that when I’m hammering out the fantasy contract for my book, in the negotiations in my mind.

After these giants of the publishing industry, the article got a little more real, with Joanna Nadin, whose YA novel Joe All Alone was adapted into an award-winning television series. Joe All Alone was optioned before publication for less than £5,000. There were however extra payments for each episode for a few months, each big enough to cover a mortgage payment. That’s not nothing, and anyone would be happy to pocket that kind of money, but it hardly equates with the fantasy scenario in my mind. I guess that you only get a huge payment to option your book if it is already a proven mega hit, like The Martian, and none of my books have quite reached that level yet. I suppose I will just have to keep on daydreaming a while longer.

To end, just a reminder that the best way to support this blog is to buy one of my books. Simply go over to Amazon, or Kobo and get one.
Labels: Books