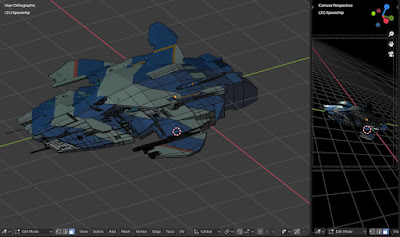 Like I wrote in my post a couple of days ago, I have managed to carve a little time out of my busy life to work on my book. I wrote a couple of thousand words yesterday, high on the chance to be creative again and with so much to get out onto the paper, and I wanted to write another 2,000 words today. Unfortunately working on a self-published book doesn’t just include writing. I am also, simultaneously and very gradually putting together the cover. In fact almost as much of my time goes into working on the cover of the novel as writing the text inside it.

As I write space opera with a heavy hint of military sci-fi it makes sense for my books to have spaceships on the cover. I could create those spaceships with a program like GIMP, or even with good old fashioned paint and brush on canvas. The results can be beautiful and evocative, but they are also, necessarily, two dimensional. If you decide the spaceship on the cover of your book should be seen from a slightly different angle you have to paint the whole thing again. If, on the other hand, you create a 3D spaceship model in Blender and then use that to render a two dimensional image, you can twist and turn you spaceship to your heart’s content, until you display it to its best possible advantage. That’s why I use Blender to create my covers.


Anyway, the last time I opened Blender and looked at my work-in-progress cover was a couple of months ago. That’s a long time, but it turns out it is actually a really good thing to be able to take time away from a design and come back to it with fresh eyes. In fact my fresh eyes told me that I didn’t like what I was seeing. Last time I worked on the spaceship model I decided, for some reason known only to god, to put a kind of roof on it. It seemed like a good idea at the time but now I think the roof makes my spaceship look like a some kind of futuristic car rather than an actual starship. That meant the first thing I had to do was undo the stuff I did last time.

As I was splitting up parts of the model, to make the roof disappear, and attaching other parts, to fill in the gaps, I was surprised when the Alt M shortcut seemed to stop working. The Alt M shortcut is an easy way to merge two vertexes of a model, which in turn is an elegant way of closing up holes you have chewed into it. I couldn’t figure out why it wasn’t working, so I went Googling for a solution.

First let me tell you what I did that was absolutely wrong. I found this suggestion and got it into my head that the problem was that the model was made up of multiple objects. Using different models at the same time is a lazy habit that I am not immune to, so that seemed reasonable. I figured I just had to select both objects and join them together to fix the problem. I did this, but nothing happened. It turned out that the problem was not that the vertexes were part of different objects.

Now let me tell you what I did that worked. Luckily I noticed a much more recent post in the results Google was presenting me with. Apparently the new shortcut to merge is just M, not Alt M. No Alt is needed anymore. This is not the first time that Google’s preference for older results has bitten me in the ass when I have been searching for an answer to a technology or software question. The Google algorithm seems to be very basic and easy to game, hence the shitload of Pinterest pins filling up every top ten selection of Google search results. I guess that’s why Google has set the search engine to favor older posts from a time when people weren’t as skilled at gaming the SEO, but that is a very blunt instrument. It works for some subjects, but technology and software moves so fast that favoring posts from the ancient history of the internet is not a good solution.

I had another, much more mundane problem after that. My old mousepad finally gave up the ghost. I needed to keep using my mouse but using it directly on the table usually results in a less responsive mouse. A couple sheets of paper makes the mouse responsive, but hard to move due to the paper sliding around. What could I use instead of a mousepad? I ended up using two sheets of cardboard. The card was bad quality and rough, which my mouse seems to like. The card did move around a little, but not as much as a sheet of paper would.

Then came the next problem. Trying to delete with the X Shortcut kept resulting in the error "Gizmos hidden in this view". It turns out I had somehow switched off Gizmos. To turn them back on again I just had to hit the icon at the bottom of the screen that looks like a bow and arrow with no string.

The next problem was related to that. I noticed I was accidentally leaving weird measurements on the hull of the spaceship. Apparently I was using the measuring tool instead of Blender’s usual default tool. My guess is I had ended up causing these two problems when I was randomly pecking at the keyboard, trying to get the merge function to work, because switching to the measuring tool is also done with a hotkey that includes M. 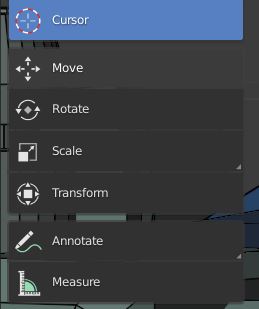 I found the way to switch back to the move tool from the measure tool was to type T, which made the various tool types appear on the left of the screen, and simply click to select it. The move tool seems to be the default one, so that is the one to go for. 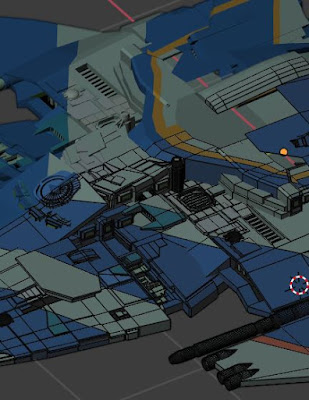 After hours of work, and the usual numerous little problems, I got the roof off the spaceship. The result, I think, looks better. Unfortunately after changing the spaceship mesh to add a roof, and then to remove the roof again, I ended up with a badly torn and warped mesh. I spent the rest of the session trying to undo the damage I had done to the poor spaceship’s structure. I welded holes shut and flattened warped areas, making the spaceship mesh less chaotic and easier to work with, for my next session making the tiny, incremental changes that will one day result in a spaceship I will be proud to put on the cover of my next book. 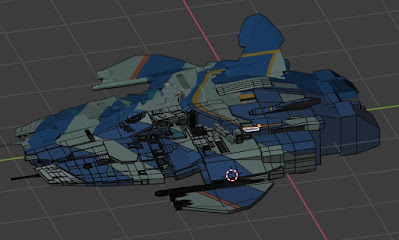