Keeping the world updated about the progress of my writing 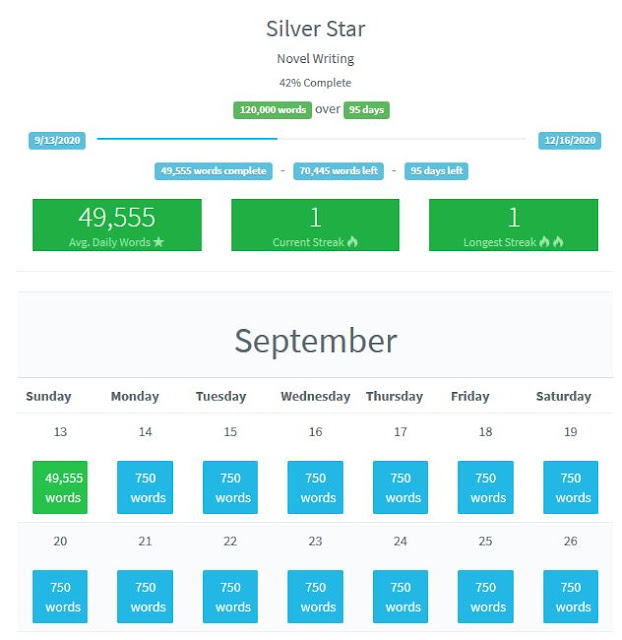 I was about to continue writing part six of my Dark Galaxy series of novels when I thought that instead of getting straight down to writing, like a good author should, I would write a blog post about writing. Some would call it procrastination, I call it book promotion: history will decide.

The subject of the blog post isn’t about my writing itself but how to keep the world updated about the progress of my writing. I’m sure there are a lot of people out there waiting for the sixth installment in the Dark Galaxy saga, and they would, I’m also sure, be delighted to know exactly how close – or not – it is to completion. That means regular reports on this blog about words written and goals achieved.


So I started looking round for an app with targets and tracking. All I wanted was a place to track my progress toward completing my book, but keeping the book itself on my own computer. I think I found what I was looking for with Pacemaker.

According to the blurb on the About page, Pacemaker is a playful method for attacking writing goals. Just set a word count target, which you can then approach in various ways to suit your style. You can either, write the same amount every day, start off small and increase your word count quota every day, bite off large chunks of your writing goal at the beginning of your schedule so that the pressure is off at the end of your schedule, or set it to random so each day is a surprise.

I liked the look of the site, so I started to type in the information needed to create what they call a project. This is the page where progress is tracked and where I can see if I have started to fall behind on getting this book done. The data entry was easy, very easy... until I got to the box marked, Target Finish Date. I didn’t actually have a target finish date, which is maybe why this book is taking so damn long to write. After a lot of consideration I decided that I would like for the novel to come out this year. Based on my current progress that’s a big task, but it is what I decided to do. With that in mind, I chose mid December as my Target Finish Date.

Next I had to choose Strategy. The options were as follows.

Steadily: the same amount of work every day.
Rising to the challenge: start small, finish strong.
Biting the bullet: start off with large commitments.
Mountain Hike: most of your effort in the middle.
Valley: intense effort at the beginning and end.
Oscillating: a mix of heavier and lighter loads.
Randomly: every day is a surprise.

I decided to choose steadily, though I was very tempted by the randomly option. In a fraction of a second my word target per day was calculated. Terrifyingly, the site told me that if I wanted to produce a book of 120,000 words, I would have to write something like 1,250 words per day to hit my target. Yikes! I thought, but then I remembered that I have already done a lot of writing, months of writing in fact. I already have 49,555 words in my Libreoffice document, so I put 49,555 as progress for my first day, causing pacemaker to recalculate. According to the new calculation, the number of words I actually have left to write per day is 750. That isn’t even a thousand. It is a much more achievable goal, and one I am going to try to stick to.

Let’s see how it goes. Now excuse me but I have 750 words to write before the end of the day. To end, just a reminder that the best way to support this blog is to buy one of my books. Simply go over to Amazon, or Kobo and get one.