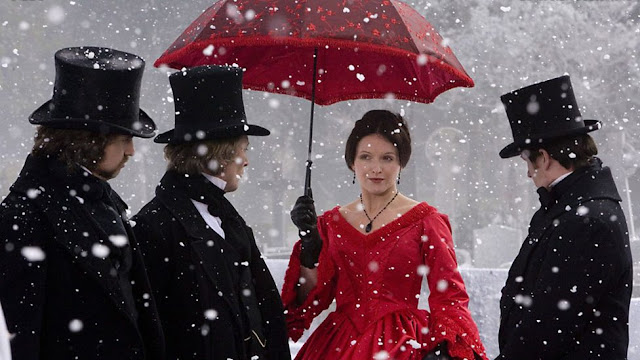 There is only one door still closed on my advent calendar, which means it must be very close to Xmas. I always look forward to the festive season, and I'm especially pleased about the onrushing Xmas this year because I have been working hard to start the tradition that I get a giant robot kit for my present each year, and that tradition seems to be starting to take root. After Xmas, there will undoubtedly be a post about the fun I have building it, similar to my post from last year about building Mazinger Z.

In the mean time, I have been looking for something sci-fi yet Xmassy to watch. It's not as easy as you might think. Those who are into horror have an embarrassment of riches when it comes to movie mashups of the holiday season and their preferred genre, and some of the films are even watchable. The menu of options is a lot lighter for sci-fi fans. I couldn't bring myself to watch Star Trek Generations, for example, just for one measly scene where Picard remembers his son. Nope, I want a heavier does of Xmas in my sci-fi than that. 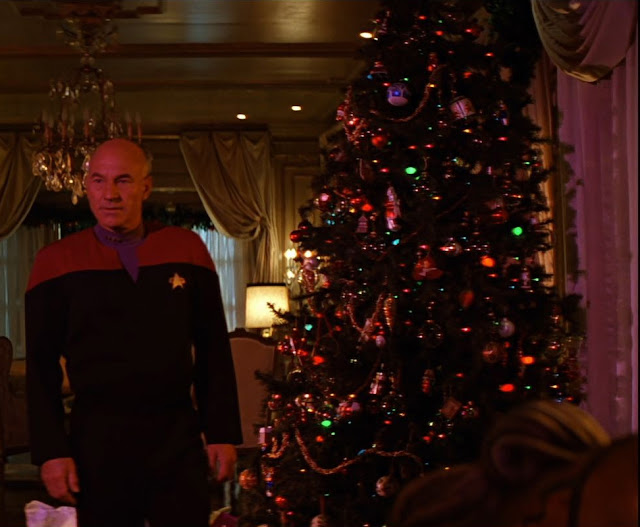 I gave up on finding a movie with both Xmas and sci-fi, and instead turned to TV. There are much richer pickings for sci-fi and Xmas smashes from the small screen, and I ended up with the opposite problem. There was too much for me to watch it all and still keep up with all the wrapping of presents, decking of halls, egging of nog, and what-have-you on my Xmas to-do list. But I guess that's a better problem to have than zero options.


The range of shows for consideration was slightly narrowed, thankfully, because I wanted to see something I hadn't watched before. This did disqualify a lot of good stuff, such as the excellent Futurama stuff about killer Santa robots, but still left plenty to choose from. For example, I have only recently returned to watching Doctor Who, after giving up on it around season two of New Who.

I kept trying to get back into it after that, but was repulsed by the grandiosity that was gradually being attached to the Doctor. A character that was - for me, at least - a school drop-out and itinerant space minstrel was being turned into a demigod of awesomeness. I always found the increasing reverence shown to the character by everyone he encountered to be extremely weird. I'm back on board with Doctor Who now, after a barnstorming season with Jodie Whittaker as the new Doctor, but being on the outs with Doctor Who for so long means that I have never seen a Doctor Who Xmas episode.

The tradition of Xmas Who didn't start till 2005, but has been a regular fixture since, and there are now a bunch for me to choose from. I searched out a list on the Nerdist of Xmas Doctor Who specials that are ranked in order of watchability, and there are some tempting shows on the list but the one that really caught my attention was The Next Doctor.

Before we go any further, let me warn all readers of this post - all six or seven of you - of imminent, incoming spoilers. This is an ancient episode of television, so I don't think normal spoiler etiquette is strictly required here. Nevertheless be warned: plot twists are about to be revealed. Get ye gone if this is the sort of activity that disturbs you... Okay, back to the episode.

Nerdist describes The Next Doctor thusly:

About 45% of this is a very good episode. Unfortunately, 55% of it is incredibly stupid. For God’s sake, a giant Cyberman wreaking havoc across London…so, so dumb. The following full season had to canonically retcon that garbage.

Well, the very thing the reviewer at Nerdist didn't like (the giant robot) was what rocketed this up to the top of the episodes I was considering watching. In my experience, no visual entertainment with either giant robots or giant monsters - or both - is entirely bad.

On the other hand, this is Doctor Who, so it cannot be expected to be entirely good either, Doctor Who never is. For me, the important questions were; Is it entertaining? And if so, is it appropriately Xmassy?

The answers to these questions are: Yes, and yes. 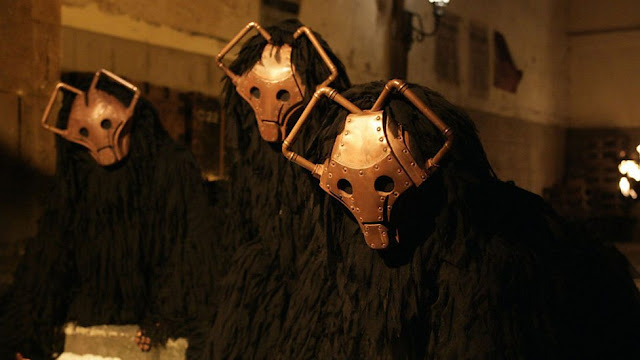 The episode had moments of slapstick that made me laugh out loud, such as the Doctor being hoisted in the air by a hairy Cyberman, and moments of real drama, which were basically anything with Dervla Kirwan. She was such a great enemy, and seeing her in her copper, cyber-headgear, worn with a red dress was wonderful. She was at the controls of a giant robot and literally stomping on the Victorian society that had been oppressing her. 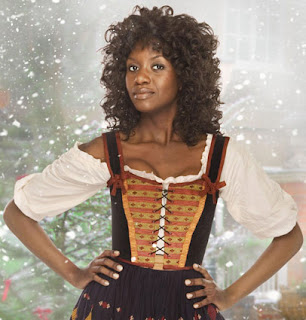 Other good stuff included the companion, who was handy with an ax and had who should have become a regular on the show if there was any sense to this universe.* Rosita is not officially a companion of the Tenth Doctor, but rather a companion of Jackson Lake, who believed himself to be the Doctor. Nonetheless some media and references list her as a one-off companion of the Doctor's.

The episode also looked great. The BBC has a lot of experience of getting extras into period costume and making picturesque corners of the country look all Victorian. There were also lots of Xmas trees, and Xmas markets, and snow, and such. It was all Xmas, all the time, which is very much what i wanted to see today.

The bad stuff, I hear you ask? Well, this is Doctor Who, so sure, there was bad stuff. There was a stupid fridging of the fake Doctor's wife. Crowds gather to sing the real Doctor's praises, continuing that weird transformation of the character into a demigod that I was talking about earlier. There isn't much tension in the episode either, and that is because the Cybermen are so incompetent and rubbish.

Now, it appears, not content with choking to death when brought near gold, the Cybermen can be easily destroyed with a futuristic USB stick. They also shout "Delete" before killing people, probably because the Daleks have copyrighted "Exterminate". Boy did I groan every time one of them said "delete". And that's not all, these guys really pushed themselves when it comes to being rubbish and nonthreatening. They can be easily held back by a cutlass, they leave a super-weapon capable of destroying their iron giant just lying around, unguarded, and they didn't even have any kind of ranged weapons at their disposal. They could have doubled their deadliness just by picking up a flintlock or blunderbuss... risible. 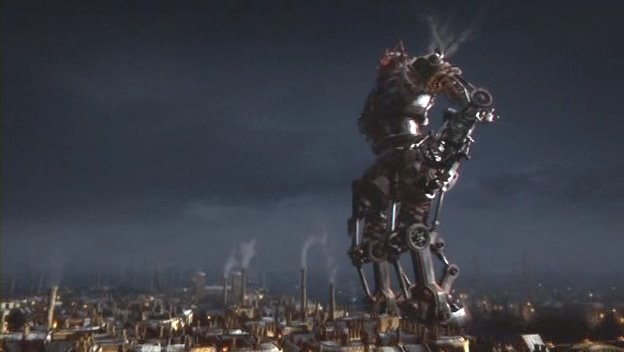 Even the giant robot CGI, while entertaining, and just say competent enough for a BBC Xmas episode, was - it is sad to say - enormously bad. The super-sized cyberman shifted scale from 12 feet tall to 200 feet tall depending on the camera angle, and it rose from the river Thames particularly unconvincingly, as if on an elevator, and it had weapons that would look silly even in a computer game. I was also underwhelmed by its Victorian styling. I would go so far as to say it was a steampunk travesty. It had giant cogs and chimneys, and was piloted from an unprotected belly cavity. Just stupid and ugly. I mean, I understand why they went in that direction, with this being an Xmas episode, but I can't approve. To my mind, steampunk has no place in Doctor Who. 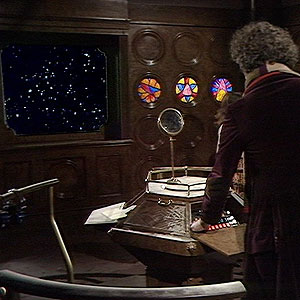 I blame all the regrettable encroachments of a steampunk aesthetic - even into the saintly Jodi's most recent season - on the backup control room. Everyone loves that wood-paneled little den, but the gleaming white version is so much cooler... and creepier, to be honest. 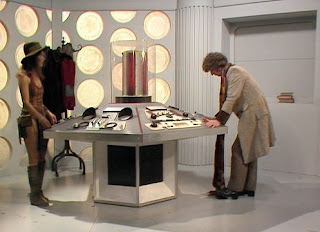 It's like a hospital, unsettling and alien, while all the under-lit, brass and wood versions that have followed are like something cute and cozy from a Disney-movie version of a story by Jules Verne.

I could go on and on about the bad stuff, but like I said, this is Doctor Who, it is never objectively good. You just have to make your peace with that, do headcanon where you can, and suppress or look away from the stuff that can't be mentally explained away. The question is, was the episode objectively good enough and Xmassy enough to be a fun watch, and I still think that... yes... it was, even taking all the bad stuff into account. For any fan of giant robots, this is the Xmas episode of Doctor Who for you. I can honestly say that I found it a hoot and a half. So pour a glass of eggnog, nibble on a ginger biscuit, and enjoy.

*There isn't. You just have to look at the bozo currently besmirching the office of US President to realize this.
Labels: Doctor Who sci-fi TV