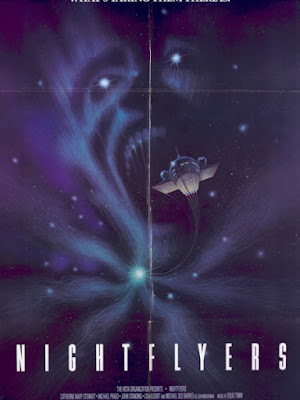 Oh Boy, the things I do to myself in the name of sci-fi. For reasons opaque even to myself, I have decided that I am going to get into the new Nightflyers series. In preparation I have already read the Nightflyers novella, which was... not good, and now I have watched the eighties movie. Like I said, I put myself through a lot in service of science fiction.

Nightflyers is a 1987 movie and it has production levels and special effects that are about the Red Dwarf, Doctor Who, or Blake’s 7 level, which means enthusiastic but hobbled by a lack of funds. The copy I found to watch on YouTube, thanks to Vivek Maru, seems to have been recorded directly from somebody’s video, which adds to its low-rent charm. It’s a fuzzy and unique format I have not experienced in a long time.. so there was a jolt of nostalgia, and that's a plus.

I really love this film I know it’s cheesy and predictable but still... a guilty pleasure...  plus Catherine Mary Stewart.. God Yes... and the soundtrack by Doug Timm. The electronic score is really beautiful! I have listened to the music a lot over the years. It’s really a tragedy that the young composer of "Nightflyers" was murdered before he could see another of his scores released....so sad....﻿ 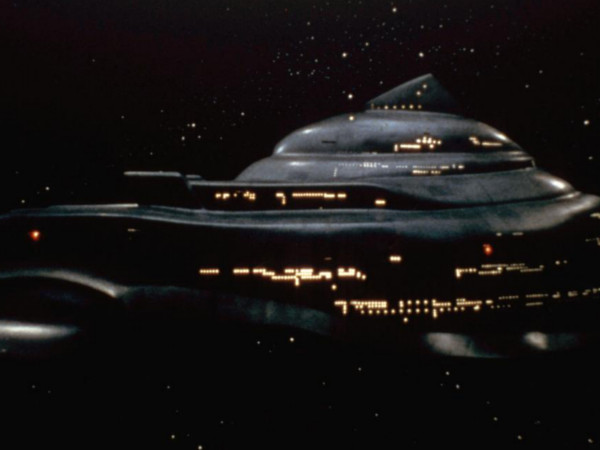 So there is at least one fan of the movie out there. I'll start my dissection and deconstruction of the film with what is most important in sci-fi: the spaceships. The Nightflyer spaceship model looks pretty good, like a huge submarine, or whale, with pinprick portholes in the side to show scale. The shot of it starting its voyage, however, as it exits some kind of moon or asteroid, is so bad it looks like a colorized shot from a 1930s Flash Gordon serial.

It’s not just the spaceship that sometimes looks terrible, the equipment the science team uses wouldn’t be out of place in a school computer club of the time. The whole thing screams B movie, and in the tradition of sci-fi B movies, it starts with a protracted information dump, given by one of the actresses, and she seems to have been given the direction that it should be delivered in the closest to an emotionless monotone she can manage.

Once the infodumping stops and the dialogue starts, it is so badly written that I almost wanted the story delivery to return to the monotone. That way it could be like listening to an audiobook, but with visuals. The dialogue is so badly written that it is almost like non sequiturs. The characters say stuff, but the people listening don’t react to it, and then they, in turn, say some other stuff that nobody responds to. It’s very weird.

The movie is obviously influenced by 80s movies, like Highlander, Blade Runner, which means the inside of the spaceship looks like an office building, but through a weird haze, like in Blade Runner, but used so heavy-handedly it seems like the spaceship is foggy inside. 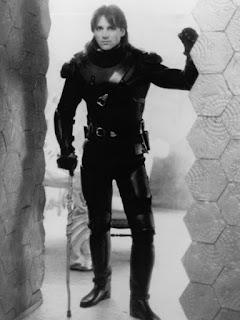 This is a movie where some stuff works, while other stuff does not. The introduction of the telepahtic character is hilarious, not least because he has come dressed as Highlander. Michael Praed’s introduction, on the other hand is very effective. I have a soft spot for Michael Praed, who starred in Robin of Sherwood, a British television series, based on the legend of Robin Hood that ran from 1984 to 1986. Unlike previous adaptations of the Robin Hood legend, it combined a gritty, authentic production design with elements of real-life history, 20th century fiction, and pagan myth. The series also had a great musical score by Clannad.

Praed's captain is a genuinely interesting and enigmatic presence. In fact, thanks to the goodwill Praed generated in me, I decided that there is a lot to like about this movie. With a little head cannon to explain all the fog as some artifact of the spaceship’s hydroponics, and the monotone delivery a homage to 2001, and the idea that people have become more emotionally disconnected in the future, it becomes an enjoyable viewing experience.

It’s entertaining to make fun of the stuff that doesn’t work in this movie, but there are some bits that are very, very okay. There is a scene where Praed visits one of the scientists as she works out. The dim light, mist, and Praed as a hologram is very visually striking. All the visual stuff works in that scene, even if the dialogue is a little portentous and non-sequiturish, as usual.

Having read the book, I can see that it is fairly faithful to the original story, though it does change a few elements here and there. It has wisely cut out a lot of the worst stuff to be found in the original story, though maybe it is more accurate to say it plays it down rather than removing it. For example the captain is still explicitly explained as the clone of the original female captain, his mother. And we almost immediately learn he was intended as her lover. So some of the effed up s**t from the original story has made it into the movie. All the sex stuff between the scientific team, and the captain’s voyeurism, is however just hinted at, instead of being made a central feature, as it is in the story, so that is a huge improvement.

The telepathic stuff works quite well in the movie, too. The movie only vaguely hints at what the scientists are looking for, rather than giving pages of history and mythology like the book, and that works well when the class 10 telepath detects a presence on the ship. The first intimation of this presence is particularly good, and if the telepath had been a better actor, with a less distracting haircut, and any costume except a Highlander outfit, and better lines written for him, and if there had been better special effects for the first attack on the scientists, it could have been a very effective scene. As it stands, for a 1980s B movie, it isn’t bad. It isn’t the only effective moment either. 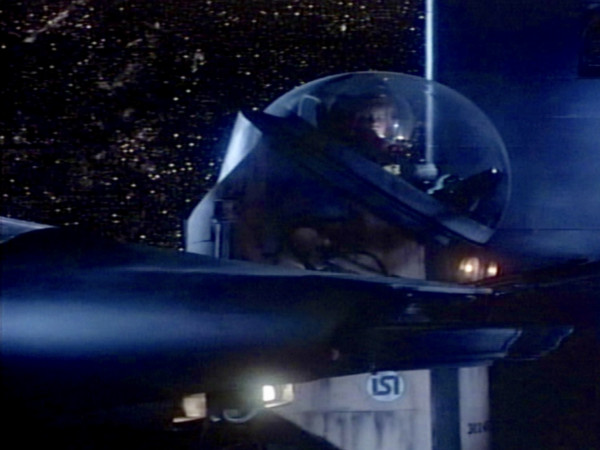 Also, one of the problems with the original story is that its big reveal is very predictable. The movie, on the other hand, makes the wise decision of introducing the big bad early on, with very little misdirection about where all the danger is coming from. I was also wondering how they would handle the scene in the book where everybody moves off the ship, and I was pleased to see that they went for it. Theey spent some budget on some exterior action, and good for them. It is done quite effectively, too, considering the limited SFX budget.

All in all, a very dated and flawed sci-fi movie, but enjoyable. If the TV series takes the basic story in the same sort of direction, with modern writing and a respectable budget, it could be very good. We’ll have to wait and see if that is really the case.
Labels: Nightflyers sci-fi movie