Sci-Fi Comics like Venus and the Ballad of Halo Jones 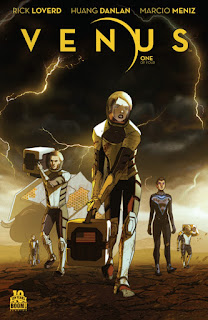 I wrote a post about Venus, recently. I explained how I had been attracted by the cover, which features a group of grim-faced people in space suits dragging equipment across an alien landscape with a storm gathering behind them. Actually, the thing that really grabbed me was that the foremost character was female.  Also, I didn't see Venus on a news stand, I saw it long before.

I had been looking forward to Venus since Comic Vine shared a preview of a new sci-fi book coming our way. I loved it, because it reminded me just how much I love sci-fi comics. It all started with a comic book called 2000 AD, of course, which is actually still going today. Among all the sci-fi stories in 2000 AD, the Ballad of Halo Jones was one that stood out for me.

According to Wikipedia: Halo Jones first appeared in July 1984. The eponymous heroine - they say - is a highly sympathetic 50th-century everywoman, and the tone of the strip runs from the comic to the poignant.

It was the first time I had read anything in a comic book with a female protagonist, which was refreshing, and the art was very skillfully drawn by comics legend Ian Gibson. Halo Jones wasn’t without its issues, of course, probably because it was written by Allan Moore, who has a strong misogynistic streak, and likes scripting violence against women. Also Ian Gibson was not averse to cheesecake, titillating artwork. I liked Halo Jones for what it wanted to be, at its best, not what it was. I liked the strip despite its creators, not because of them.

Halo Jones is a huge milestone in sci-fi comics, and it is part of a prog slog by Tor.com comics blogger Tim Callahan. He says that it is a strip that was antithetical to the ethos of 2000 AD at the time, calling it Alan Moore’s version of a futuristic female Forrest Gump.

The war took Halo to a high-gravity planet called Moab, where she entered a relationship with the commander of Earth's forces. During his war crimes trial, Halo finds out that he killed the population of a planet. Halo tampered with the valve on his gravity suit, ensuring that the high gravity of the planet would kill him in ten minutes, and then escaped in a spaceship.

It was a weird and brutal arc, about a future soldier who wasn't a supersoldier, and it very much influenced the way I saw sci-fi. It showed me that stories about the losing side in a war among the stars were just as interesting as stories about the winners. And the best stories might be the ones where winner and loser were hard to tell apart.


I'm not the only one who enjoyed Halo Jones. Rick Austin writes on Fortress of Solitude about how much he likes the strip. He sees it as certainly the best one ever written by Alan Moore. He likes that Halo Jones isn’t particularly brave, clever or strong. She isn’t some feisty “badass” heroine but as the series progressed her adventure continued, the scope of it taking her from her humble beginnings to being a pivotal figure in an interstellar war.

Anyway, it felt like Venus was something similar, and I was not disappointed by it.