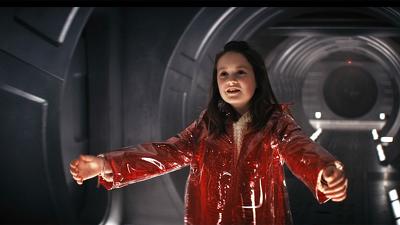 I am watching Nightflyers, episode by episode, and so far I'm enjoying it very much. I talked about episode one here, and now we are ready to take a look at episode two.

In this episode, the astro-physicist head of the science mission aboard The Nightflyer, Karl D'Branin, sees his dead child in one of the ship's corridors. She is wearing a red coat that makes her look like the child in Don't Look Now, a 1973 movie directed by Nicolas Roeg. In it, Julie Christie and Donald Sutherland play a married couple who travel to Venice following the recent accidental death of their daughter. 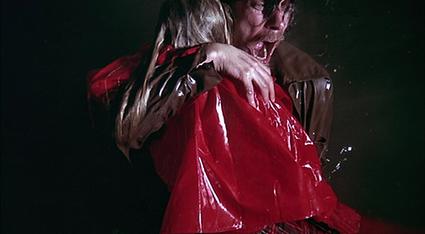 They encounter a clairvoyant, who informs them that their daughter is trying to warn them of danger. The husband at first dismisses their claims, but starts to experience mysterious sightings. The themes are obviously similar to Nightflyers, which also focuses on extrasensory perception, and where the daughter also appears to D'Branin as visions. Such a classy nod to such a great movie bodes well for future episodes of the show.

Don't Look Now is renowned for an innovative editing style that employs flashbacks and flashforwards to show precognition, and some scenes intercut or merged to alter the viewer's perception of what is really happening, and these are also effects that Nightflyers employs. For example, we see some disturbing stuff from the memories of Lommie, a cyber technician specialist who interfaces with computers via a surgically implanted Neuro-Port in her arm. We see this most technological of characters in a sackcloth smock, in a barn, about to torture a bearded man in a chair. She uses a machine that can read memories to prompt this vision, and it uses white laser lines, directed at her eyeballs, making for images that are really cool looking.

I like sci-fi with a touch of horror. The books I write are more sci-fi but there are horror elements, too. They belong to a series called Dark Galaxy, which starts with Galaxy Dog. Here are the first two lines of Galaxy Dog's blurb:


Thale, the terrifying L-1 psychic, brought aboard the Nightflyer in the hope that he can communicate with the mysterious aliens, was presented as a terrifying force in episode one. It was implied that he was the source of all the ships problems, but anyone who has read the novella or seen the 1980s movie will know this is all misdirection. He already seems less of a threat this week, and has been contained in the garden section.

In the gardens Thale encounters a very intriguing character named Tessia, who talks to bees, and is not scared of him at all. I have no idea what hr deal is, but I will be intrigued to find out. The soldiers on board to guard Thale want to recapture him and stuff him back in his cage, but once again prove how ineffective they are. They program a spider-droid to go into the garden dome after him.

While they are doing this, D'Branin and his best bud, Rowan, an affable xeno-biologist, who is growing on me, send a probe toward the aliens, and the probe is called White Rabbit. It seems a little starnge that this is launched when they are still millions of miles away from their objective, but I'll go with it, in the hopes that it leads to some interesting developments later in the series.

Roy Eris, the reclusive captain of the Nightflyer and head of the powerful Eris Corporation, the leading builder of off-world colonies in the solar system, decides to trust D'Branin. He tells the scientist about his mother. This is interesting because of what is in the original novella. If you have read the original story, you will know that the reveal of the malevolent Mother personality within the ship is saved for much later. It's great that this is out in the open so soon, because it is a weak twist to hang a whole story on, and the writers of the series obviously have other plans. During this conversation, we also learn that the memory machine can be used to replace real memories with fake ones. This is interesting because it wasn't in the original story. 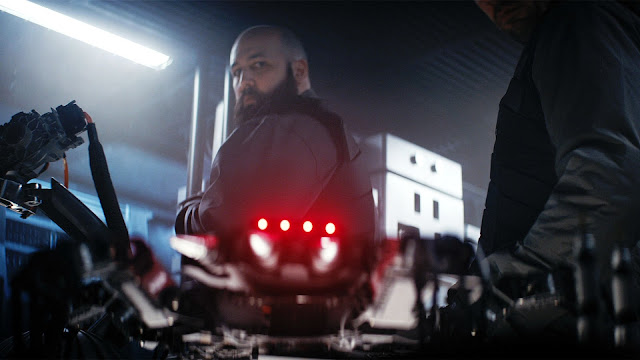 Just as we learn more about the captain's mother, and her ability to take over any system aboard the ship, the soldiers lose control of their laser-toting spider droid. It has four deadly laser eyes, instead of eight. The door to the room they are in suddenly closes, and they are locked in a confined space with the small combat drone before they can even use it against the telepath, and the little robot is legitimately creepy.  It climbs walls, punches through bulkheads, and slices people up with its laser. 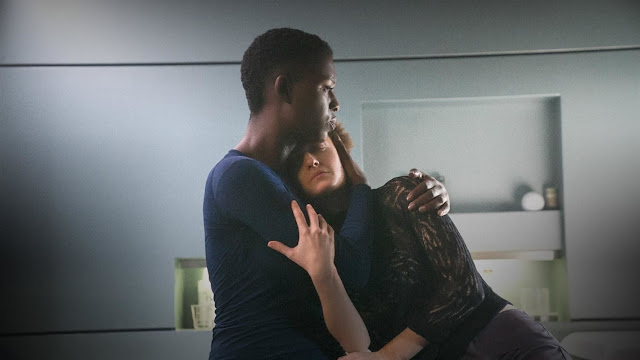 Lommie is persuaded to go back into the ship's systems by Melantha Jhirl, the "genetically enhanced" cadet from the Genetic Space Program who is sleeping with her. This is somehow just as creepy as the homicidal robot spider but in a different, more psychological and abusive, way, because it's her girlfriend persuading her to put herself in peril.

The episode ends by bringing us back to the girl in red, D'Branin's daughter, via a fascinating video call between the head scientist and his wife, where we find out she is voluntarily having her memories edited to forget their little girl. Just as in Don't Look Now, and Nicolas Roeg's work in general, time is presented as 'fluid', where the past, present and future can all exist in the same timeframe. Judging by this second episode, and its influences and aspirations, this series should be a treat indeed.
Labels: Horror Nightflyers sci-fi TV