Nightflyers - episode one - All That We Left Behind 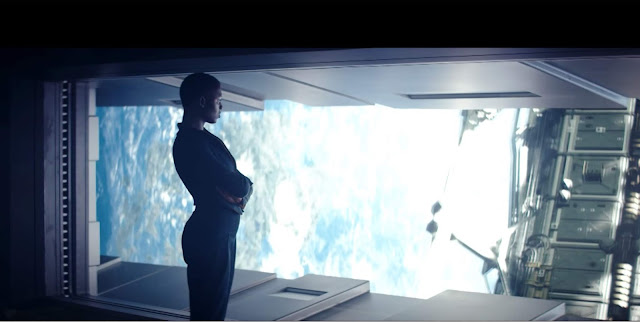 The release of Nightflyers totally passed me by, even though I have been looking forward to it for a long time. I have been intending to write episode review/recap type posts for it since I heard it was coming, about half a year ago. I even went so far as to read the novella, and even watched the eighties movie in preparation for it, but its release slipped under my radar. It was only when I spontaneously remembered that it existed, and wondered why I hadn't seen it yet, that I checked its release date and saw it had been out for a while.

This show is not being pushed at all, which is weird to me. The First got a real push, as did the recent season of Doctor Who, but nobody seems to care about Nightflyers, even though it was written by you know who, the author of you know what. It's amazing to me that the first episode dropped almost a month ago and the finale is already out there, all without me hearing word one about it. I guess I'm hanging out at the wrong nerd sites. 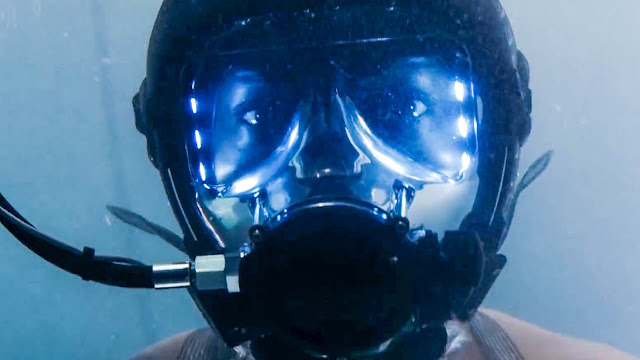 Anyway, missing the premiere means having to decide whether to read potentially spoilery reviews or not. I decided it would be okay to indulge in just one review of the first episode. It said the horror beats were predictable to aficionados, but the worldbuilding and sci-fi stuff was good. "I'll take that," I thought. In no way am I a horror aficionado - I was watching Ghost Busters the other day, and the moment when the basement door opened legitimately agave me the heebie-jeebies - so it sounds about right for a scaredy-cat like me. In my sweet spot for the amount of horror and jump scares I can take.

I like sci-fi so much that I write it. The books I write belong to a series called Dark Galaxy that starts with Galaxy Dog. Here are the first two lines of Galaxy Dog's blurb, so you can get a feel of the kind of thing these books are:


After watching the incredibly dated movie version, and subjecting myself to the skeez of the original Martin novella, I feel I need to take this episode-by-episode. So here is what I thought about seeing, almost a month after everyone else, the first installment of this show, called All That We Left Behind.

I thought it was an extremely mixed bag. Thankfully, they seem to have gone down the same road as the eighties' movie in that they have toned down the titillation. In the movie they replaced it by giving away the novella's extremely predictable twist early on, and then deal with the psychological ramifications of that. In this show they have replaced the dialed-down voyeurism and bed-hopping by dialing up the horror. Even in episode one, there is gore, puke, and terror, all the time. We do have time to meet the characters, though, among all the horror shenanigans. 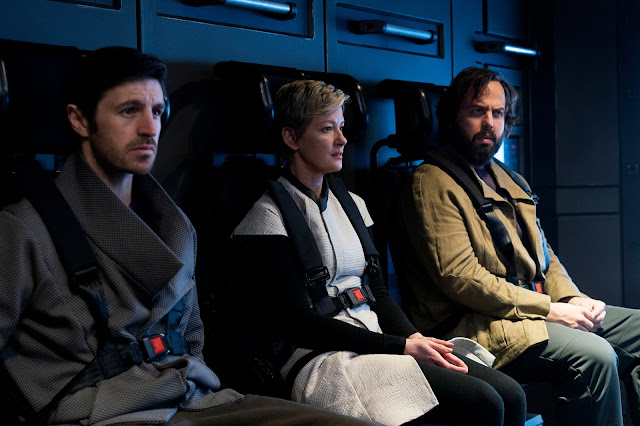 Eris, the captain of the ship, is seen briefly, but is a constant presence. In the novella, I suspect that this is the character Martin most identifies with. He is being played by an extremely sympathetic actor, David Ajala, which distracts from what a horrific person he is - assuming he is the same pervert, voyeur, basement dweller with a Christ complex as in the novella - and I'm sure we'll find out all about him in the coming episodes. He is in charge of the spaceship, while the science mission has its own leader, Karl D’Branin (Eoin Macken).

The mission is an attempt at first contact with some aliens who are passing by Earth, and it is a private endeavor, dreamed up by Karl. This driven scientist is the ex-husband of the main character Dr. Agatha Matheson (Gretchen Moll), which is a dull trope, but they are both great actors, so I'm okay with finding out whatever their backstory is. Agatha is on the mission to look after a cockney-Akira telepath, who is going to make first contact with the aliens. This kid is super, annoying, like a homicidal Wesley Crusher who thinks he's a tough guy and has mental powers. He's so bad I would be tempted to check out of this show, except that I know he is likely to be sidelined in the near future. 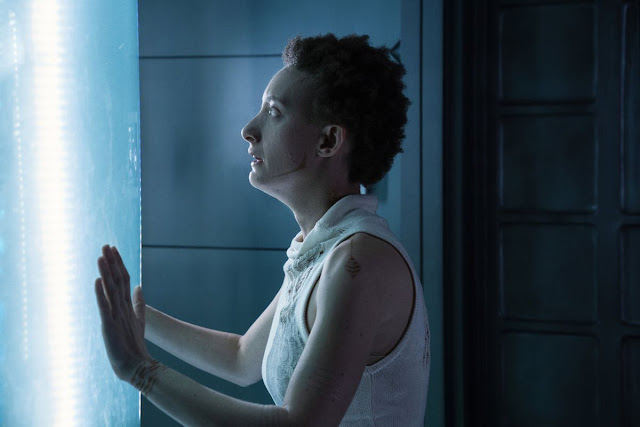 There are two absolutely magnetic female characters, Melantha plaid by Jodie Turner-Smith, and Maya Eshet as Lommie. They start a relationship by the end of the episode, which is both good and bad. It's great because these two are the most compelling actors on the ship, but bad because we are left in no doubt that the captain is watching himself some girl-on-girl action via the ship's cameras. I just wish this whole voyeur element had been completely dispensed with. It is just - ick.

The special effects and the sets are great, and I can imagine spending quite a few episodes on this spaceship, but the dialogue can too often devolve into macho posturing. There is a security detail to look after the angry Wesley crusher, telepath dweeb, and they are armed with shotguns. The telepath dweeb is locked up in a big metal cage, except when he isn't. None of it makes any sense, and the kid routinely murders, bludgeons and messes with these fat red shirts, and nobody seems to care.

Hopefully this is all just setting up the telepath as a red herring, and they can forget about all the weird fighting between telepath and his guards when the real menace of the show comes into the foreground. That's what happened in the novella and in the eighties movie, and I can't wait for that to happen.

After one episode, I'm enjoying this thing, and it is a strangely good replacement for Doctor Who, now that the most recent season is over. We didn't get a good space base in peril story from the Doctor Who season, and this is kind of what Nightflyers is. On episode down, nine to go.