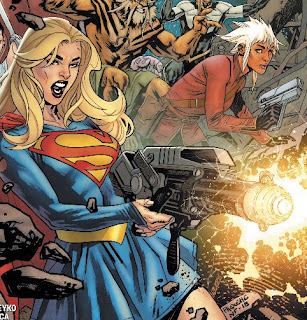 For some reason Supergirl has a gun on the cover of the latest issue, number 27. I opened the comic up, and there was an angry, purple alien expressing exactly the same thought as me:

"A weapon, Supergirl?" she says. "How disappointing, and cowardly."

It turns out Supergirl has good excuse, of course. Her reserves of yellow sun power are almost exhausted. I keep forgetting she only has her powers on Earth.

And that purple alien, when I get a good look at it, is the same one Supergirl spent an entire issue in battle with, last time I read an issue of this comic book, so it looks like I haven't missed much. One new thing is that The Omega Men are in the background of a few panels this time, so I guess they joined the party, otherwise this issue is just a small incremental unfolding of the current story.

The B plot allows us to find out that - shock, horror - the random, hot, green guy Supergirl met a couple of issues back is actually an enemy spy, working for an evil ice lady. I was not surprised for a second. This guy was too obviously bad news. I am also not surprised that he has already had his head turned by Supergirl's wholesome goodness.


Oh, and Krypto is ill, but don't worry, the dog soon hops up and gets into action. He shoots the ice lady's hand off, while Supergirl vows to take revenge for a dead young ewok/teadybear type thing. I don't remember Krypto or Supergirl being so bloodthirsty. She certainly isn't ever rage-filled, like this, on the TV show.

Phew, it turns out this isn't like her. She's actually being controlled by a Stormbringer-like ax. Though that doesn't explain Krypto zapping hands and maiming people.

The Omega Men disappear, and Supergirl meets Starfire's brother. Then Supergirl is suddenly at the secret asteroid base used by the Omega Men, and there are some resurrected heroes on medical beds. I don't quite understand, but I assume it would make sense if I hadn't missed some issues. Still, I was confused, but so is Supergirl, at this point. 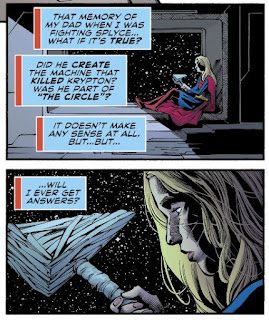 There are still many secrets for her to get to the bottom of, and I am enjoying this journey, even if I have missed an episode.

This issue is full of superhero action, with a nice admixture of sci-fi props, all with that extra special something that is Supergirl.

The comic ends with the arrival of some monsters - each one a terrifying and twisted version of Supergirl - created with Kryptonian cloning technology, and I can't wait for the next big fight. This comic book has been a lot of fun, and it doesn't seem in the mood to let up any time soon.

Before we wrap up here, just a reminder that the best way to support this blog is to buy one of my books, so why not go over to Amazon, or Kobo and see if there is one that catches your fancy.
Labels: DC Comics Supergirl