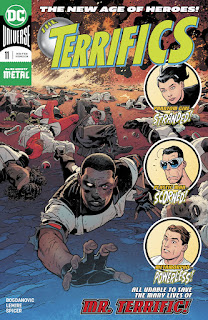 I got into The Terrifics because I thought it might be similar to The Ultimates, which I loved, before its unfortunate demise. And it is, and it isn't, similar to that amazing title. Like the Ultimates, the comic book is about a small team of heroes who have adventures that are outside the normal superhero-book framework. Like the Ultimates, the team is commanded by a black man who is a genius, and has access to technology beyond anything ever seen on Earth before, all designed by himself. The team itself, however, is not as diverse or interesting as the roster the Ultimates had. The Terrifics are Mr Terrific, Phantom Girl, Metamorpho and, lastly, leastly, and a major misstep in my opinion, Plastic Man.

From this moment on there are plenty of spoilers for issue 11, so go read it before returning to see what I thought of it.

BlackNerdProblems nicely summarizes what is going on in this issue. As they say, it focuses on the team fractured. After their adventure with the Strong family, each character has gone their separate ways. Mr. Terrifics has thrown himself into his research into the Dark Multiverse. Plastic Man, Phantom Girl, and Metamorpho have all gone home to mixed result feelings.


This issue sees the heroes all trying to return to normal life, and the writers attempting to show that normal life can be even less enticing than being a hero.

First we get an extended look at Plastic Man's home life. It's sad, a failed relationship, an estranged young son, and he hasn't been keeping up with alimony payments. I'm not a fan of Plastic Man, and this glimpse of his private life makes him an even worse character, to me.

His own kid doesn't have a high opinion of him either, and uses the plastic powers he seems to have inherited to attack his own dad. It's all a little nasty and dysfunctional, and you get the impression that Plastic Man is a bit of a dick. Seeing a character engage in a few tropes of toxic masculinity, by displaying behavior that alienates his family is not a great look for any character, much less the wisecracking, zany Plastic Man.

Then we go to Phantom Girl, who has returned to her home planet, and also has a dysfunctional relationship to deal with, this time with her mother. Her mother is Arranging a marriage for her, and again it's a kind of a distasteful storyline. It's like the writers didn't eaven try to reach beyond the most obvious options for these situations. 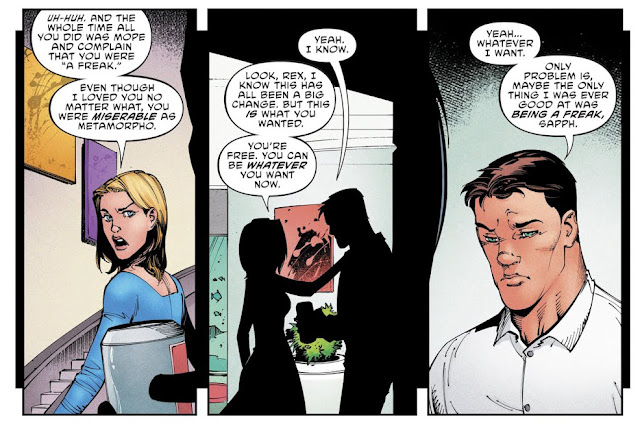 Next comes Metamorpho, and the problem the writer has saddled him with is that he can't get a job. This is not necessarily as exhausted a vein as t might seem, in our ever changing world of work. It would have been interesting, for example, to actually explore the modern world of employment, and how precarious and exploitative it is. The writer could have given Metamorpho a gig job, maybe to show how you have to be a superhero to survive as an Uber driver or Amazon picker, but instead the writer shows a world of work that hasn't existed since the 1950s. Metamorpho too has a wife, and he too finds it impossible to relate to her. On top of the missed opportunity of looking anew at the world of work, the home life depicted for Metamorpho is just as regressive and distasteful as the home lives given to Plastic Man and Phantom Girl. 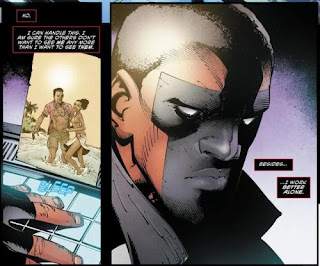 The only hero who doesn't get this treatment is Mr Terrific, but it is implied with a meaningful look at a photograph, that his wife has been fridged at some point in his history, which is even worse. The one trope that everyone should now be avoiding at all costs in comic books is fridging female characters.

Thankfully, the issue stops dwelling on all these ill-advised back stories about half way through, and gets back to the action.

Mr Terrific is chasing a caveman across the multiverse, and this evil guy is killing all the Mr Terrifics of all these alternate worlds. Pretty soon, the chase takes Mr Terrific to a world where his wife is still alive. I really perked up when I saw this. "This is much more promising," I thought. "It's great to see a love interest being retconned back to life, rather than stuffed in a fridge."

The comic then ends on a nice cliffhanger, where we see that Java, this caveman-type person, has assembled his own superteam.

The Terrifics is not anywhere near as good as The Ultimates was but it is intriguing enough that I'll be picking up the next issue.
Labels: DC Comics