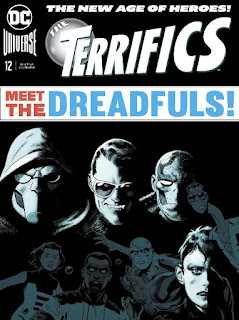 I was a little ambivalent about issue 11 of the Terrifics, for reasons I go into at length in a previous post, but I enjoyed it well enough to get hold of issue 12. I guess that means the creative team has done just enough.Their job, in a medium like comic books, is after all noting more than to bring people back, month after month. 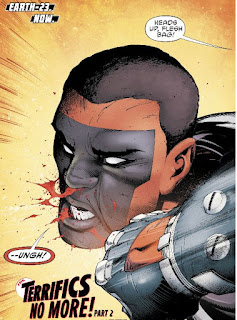 Last month I had no problem with the art, my reservations were with the story, which was a little tropey and uninspired. The cover, in  particular, last month was great, nice and pulpy and old-school comic book looking. This month's cover is a bit of a dog's dinner. There is no action, just head shots of the team, all mixed up with a similar looking team of evil doppelgangers, in uninspiring black and white. I'm thinking maybe the idea was for it to be like film noir, but it misses the mark. Once you open up, though - or swipe right on the phone screen, in my case - the comic opens strong. It starts with a literal slap in the face, and we are thrown into the action. 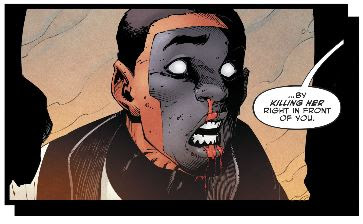 Then comes a nice introduction to the evil doppelgangers, which in my opinion should have been on the cover, but works well on page two. It's handled well, and these guys do feel like a credible threat already. The big bad, named Doctor Dread is pleasantly reminiscent of Doctor Doom, and I like that. The plot then goes somewhere a little less appetizing. Doctor Dread threatens to fridge Mr Fantastic's wife, after she has already been fridged in his home dimension. (Did I mention this is all happening on a different Earth in a different dimension). Fridging is a big problem across sci-fi media, and comic books in particular, and I wish writers would get it into their heads that it should maybe be retired by now.


We next cut away to Phantom Girl, leaving a flat, badly written, ordinary life, and coming to the rescue, and there is some lovely spaceport art. The art this month is great again, just like last time, all except that weird cover. Metomorpho and Plastic Man, too, leave their tropey and underwritten normal lives to return to the superhero business. 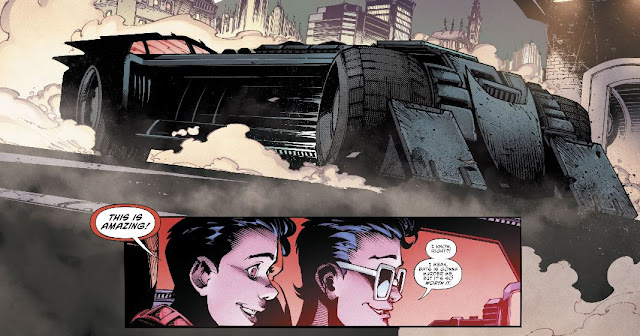 Plastic Man's normal life is the most annoying. He's a deadbeat dad, going behind his estranged wife's back so he can start bribing his kid to love him - by bonding over a macho face-off on the sport's field then taking him for a ride in a cool car. This kind of dudebro writing is not my cup of tea at all. I don't see where it intersects with real life at any point, and it certainly doesn't paint Plastic Man as a sympathetic character, as it is obviously intended to do. This is just, bad, lazy writing. The art is great though, with some atmospheric cityscapes for this lame character interaction to happen against. 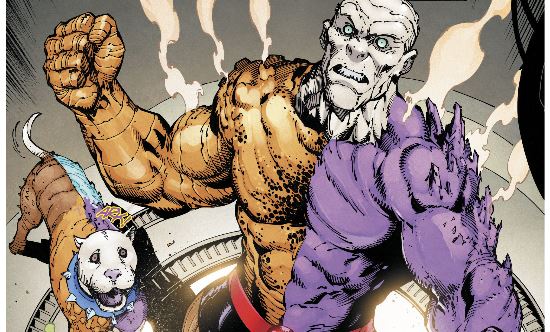 By the end of the comic book, the Terrifics are back together again, but yeesh was it a dull and tropey journey to get them there. Am I coming back for issue 13? I'm not making any promises. This comic book started out so strong in its early issues, but the last two have been slow and dull. I'm almost out of patience with them.

The job of the comic book writer is to keep me coming back, month after month, sure, but that should be because I'm marveling at the cosmic events and enjoying the action, not because I'm waiting for something to happen. There were some real wasted opportunities here. We were introduced to an interesting character in the previous issue - the female version of Mr Terrific - and we don't even get to see her this month. Instead, the villain threatens to fridge her, and that's her only role. 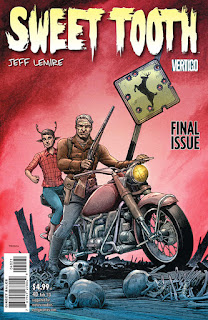 I am not happy, and I'm seriously considering dropping this title. I can't recommend anyone read it. Just wait for issue 13. Maybe something will happen then. Maybe. I was so annoyed by the writing I looked up who the writer was, and found out it was Jeff Lemire. He is the author of All-New Hawkeye, Extraordinary X-Men, Moon Knight and Bloodshot. He has recently said he’s already written his last issue of The Terrifics, issue 14 out in March 2019 and that it would be his last non-creator-owned work for the time being. He is rather busy, what with the Essex County TV show next year, as well Gideon Falls, Black Hammer and Ascender. He is also famous for a comic called Sweet Tooth, and he was already having fun with fridging in its pages. Gin Jenny said about Sweet Tooth in 2015, the following:

And there’s more than a whiff of fridging around the wife’s death in terms of the motivation it provides Mr. Jepperd, and I’m as far over that as it is possible for a woman to be, and Jeff Lemire is a teeny weeny bit on notice as regards tropes about women.

I am very happy to hear that there are only a couple more issues by Mr. Lemire to get through. I hope the next writer is a little more up to date with what we expect of gender issues in comic books these days.

Before we wrap up here, just a reminder that the best way to support this blog is to buy one of my books, so why not go over to Amazon, or Kobo and see if there is one that catches your fancy.
Labels: DC Comics