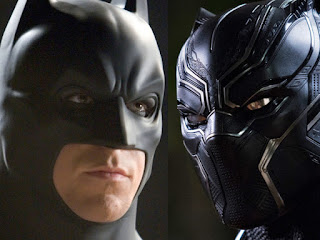 The most popular post on my blog right now is where I compare Altered carbon and the Punisher in a Vs match. I suspect what people like about this post is the primal nature of the Vs battle. This one post generates so much traffic that I would be crazy not to try the same trick again. The only question is, who should the two sides of the next Vs conflict be.

In the world of comic books, there is never-ending debate about who would win a fight between almost any two characters. True believers fervently defend their character against all comers. So the subject of my second Vs post shall be comic book characters, but which? With Black Panther still on a high after doing huge business at the box office last year, one of the protagonists in the fight is obvious. Black Panther will be pitted against some worthy opponent, and that opponent shall come, I have just decided, from the DC stable.

Luckily, Black Panther has a mirror character in the DC universe. Interestingly, there are a lot of these equivalent characters that appear in the publications of the two rival comic book publishers. Screenrant has a list of some of these very similar characters.

Swamp Thing and Man Thing, for example, were both first published in 1971, and are basically identical. Aquaman and Namor are another pair of heroes whose similarities are immediately apparent. Their abilities are almost exactly the same, except Namor can fly. Elongated Man and Mr. Fantastic also have powers that are pretty much identical, and both have an incredible intellect. They are two of the smartest men in their respective universes.


There are many more similar characters and, according to Comicbook.com, Batman and Black Panther fall into this category. In terms of origins, skills, and personality, T’Challa and Bruce are more equivalent than any other pair of characters from the rival publishers.

They were both born into wealth and privilege. They both dress in black and they both have a grim and serious demeanor. Both heroes are haunted by the murder of their parents. Both are champions of their respective domains, Gotham City and Wakanda respectively, and they have both reached the pinnacle of excellence in science and martial arts.

They both use strategy and fear to take on enemies far more powerful than them. Batman is infamous for being prepared for any eventuality. He was even shown to be able to take down the entire Justice League in the pages of Batman: Endgame. Batman’s superhuman planning has become a little ridiculous over the years. It has reached such ridiculous extremes that it is now assumed Batman will get out of any situation and defeat any enemy, and the only explanation require is... Because he's Batman.

Similarly, the only reason Black Panther ever joined the Avengers was to spy on Earth’s Mightiest Heroes and gauge threat levels and learn weaknesses. He also created contingency plans to defeat Galactus, and put them into effect alongside the Fantastic Four.

With so many similarities does it even make sense to pit them against each other and try to decide a winner? I would say yes, because despite the similarities, there are important differences.

I’m not talking here about a one-on-one fight. I’m more interested in the intangible things that makes these two characters who they are. One area where Black Panther is very different to Batman is his rouges gallery. Killmonger, Klaw, Man-Ape, and Achebe are not, on the face of things, in the same league as the Joker and all the rest of the lunatics who constantly do their damnedest to take down Batman. This points to a big difference between the two comic book superheroes, and it is one of tone.

Batman, lately, has started to have a problem with the tone of the stories told about him. Batman is one of the one percent, and he uses his wealth and privilege to victimize petty criminals and supercriminals alike. He acts outside the law, with no respect to due process, or anyone’s rights. There is even the suspicion that Batman, deep down, is a Fascist. Nolan’s trilogy did nothing to dispel the aura of jackbooted fascism that has become attached to Batman. I would even say he doubled down.

Over the course of the series of Batman films he directed, Nolan has Batman torture the Joker in a police interview room. Torture, of course, has been shown not to produce reliable intelligence and a superhero who resorts to trying to beat information from captives is hardly deserving of the name.

Alfred, Batman’s butler, famously tells him that the only way to catch a bandit is to burn the forest down. I was shocked to hear this. To me this is the violent response of tyrants and colonialists to those who oppose them. To rid yourself of one bandit, Alfred tells him, it is entirely appropriate to lay waste to an entire country. You can rain down fire on a forest kingdom to try to extinguish one enemy.

This is callous, but it is also stupid and wrong. The fact that an old British ex-soldier, obviously a relic of colonial conquests, gives this advice only makes it all the worse. When you burn down the forest, you kill indiscriminately among the forest dwellers, creating hundreds more bandits who will hate you to the core of their being for taking away their mothers, fathers, brothers, sisters, and entire communities. It is a fascist strategy that will only make things worse.

It is not made clear of Batman agrees with this advice, but to even include it in the movie coming from an ally is extremely problematic. But more of Batman’s own actions also fall far short of what we should expect from a superhero. At one point, Batman and Jim Gordon even hatch a conspiracy to cover up the sins of Gotham City’s so-called 'white knight,' the late Harvey Dent.

So we have torture, at least flirtation with the thought of indiscriminate reprisals, and then a cover up. When Gordon says of Batman:

He's a silent guardian. A watchful protector. A Dark Knight.

It comes off as more of a threat, like a secret government death squad in cahoots with the head of police, not as a benevolent force in any way shape or form. Black Panther, on the other hand, couldn’t be more different.

As Vox says about Black Panther, it contains a much more positive and progressive political message. It is Marvel’s most political movie yet, one that is absolutely grounded in black American identity. Black Panther acknowledges the horrific history of slavery, colonization, and the way these forces contributed to inequality in the United States.

Black Panther investigates how its characters’ gain their sense of morality, and the answers aren’t easy, which produces a villain, Killmonger, who’s more thoughtful, with more thought-provoking motives, than any yet seen on screen. He sees Wakanda as weak because it didn’t and won’t help its African brothers and sisters who were taken to the West as slaves.

The historic reception that’s greeted the film is indicative of how rare movies are that have such a subtle understanding of politics and the way the world works. Despite all their many similarities, the two characters couldn’t be more different, and for me Black Panther comes out on top.

To end, just a reminder that the best way to support this blog is to buy one of my books. Simply go over to Amazon, or Kobo and get one.
Labels: DC Comics Marvel Vs match