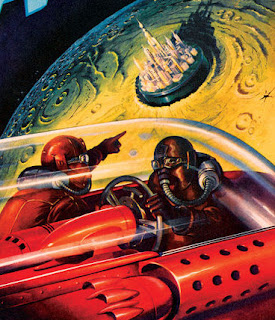 The Dark Rider was not designed for atmospheric insertion, and very little effort had therefore been made to streamline it. It was as square as a tower block, except tipped over onto its side, with numerous projecting communications arrays, and other stuff, sticking out of the hull that would be torn away or melted if the ship entered an atmosphere at even relatively low speeds.

Right now the Dark Rider was not traveling at low speed. Before being shot out, its drives had been hurling it toward the moon at full power, so it was traveling at a very high velocity. It was entering the moon's atmosphere now, and things already looked bad.

An enormously long column of smoke and flame trailed the ship and a corona of intense red surrounded it, just like a meteor, which without engines was all the Dark Rider now really was. It was just another shooting star, heated to incandescence by friction from the moon’s upper atmosphere, still hundreds of thousands of feet above the jungle of the surface. Inside the stricken spaceship, Star Questor Sheen, the only person aboard, came running back onto the bridge, carrying a bulky relay module.

He threw himself into the command chair and swiftly bolted the control array onto the side of his console.

“What have you been doing, Sheen?” Rider asked.

The question came from speakers around the bridge, and Sheen was concentrating so hard on what he was doing that he didn't notice at first.

“What are you doing?” the ship's computer repeated.

“Oh, Rider. Hi,” Sheen said. “I'm saving our asses is what I'm doing. I tied the gravitic drives into the thruster control system. We can use them to maneuver now.”

Ordinarily, gravitics were used only within a few hundred feet above the surface of a planet, where their effects were strong enough to keep a spaceship anchored in position indefinitely. Up above a thousand feet, the iron grip of the gravitic drives was just a gentle nudge, and conventional thrusters were used instead for such tasks as position keeping, climbing out to orbit, and - of course - a controlled descent. Rider pointed this obvious fact out to Sheen.

“The gravitic drives do not have the power to slow our descent,” the computer told him. “They will only be able to significantly effect our speed within a few hundred meters of the surface. By then it will be too late. Friction from the atmosphere will have reduced us to molten slag by that point.”

“No,” Sheen said, “it won't. We have good shields, and I’ve lashed together a way to make the gravitics directional. I can use them to… Yes! Keep the nose up. We'll ride this out, yet.”

“There isn't the power for this,” Rider warned.

“There is,” Sheen bellowed, his face a grimace, as he tried to slow the Dark Rider and keep its nose up by force of will alone. Down through the atmosphere came the massive spaceship, causing sonic boom after sonic boom that sent the flying lizards in the jungle canopy soaring into the sky in frightened flocks.

“By the powers,” Sheen cursed. “You're right. We need a really soft spot to land.”

The Dark Rider was low over the treetops now, below the highest clouds of the local atmosphere when, just as it seemed it might glide over the canopy forever, it clipped one of the taller trees, uprooting it and flinging it to the forest floor. Then it hit another and another, leaving a trail of fallen trees and destruction, and then it hit the ground. The deceleration was massive. There was a huge explosion, flattening trees in a radiating pattern that spread from the impact point.

The crash gouged out a crater and threw tons of local dirt and rock into the air. There was so much dirt in the air, so much smoke, so much vapor, so many leaves, and tatters of tree bark that it was impossible to see through it. There was no way to see what had happened to the Dark Rider. Slowly, minute after minute, the smoke cleared, the dust settled, and large rocks that had been hurled into the air came thudding down, and through the gradually clearing muck and murk, the shape of the Dark Rider could be seen.

But there was something wrong about the shape. Its back was broken, its nose crumpled, and the mighty nacelles of its sublight drives were torn and sagging. A fire burned brightly amidships, with flashes of discharging power arcing from a ruptured capacitor, ionizing the air and finding ground among the rocks of the new crater the crash of the Dark Rider had caused. As the air cleared, a massive slab of the spaceship's hull fell away and landed in the rock and dirt, filling the crater with an echoing thud.

Inside the Dark Rider, the damage was just as bad as outside. Massive holes in the hull allowed the local atmosphere to penetrate everywhere, corridors were twisted and blocked, entire decks had been compacted down to nothing, but the computer was distributed around numerous calculating nodes, spread through the ship's hull, and it had survived. It had been shocked into a crash state that lasted hours, but at last it managed to boot up again, and think, to some extent, using the limited mental architecture that remained to it. Its first thought was for its passenger. It had never lost a passenger before, certainly not one as important as a Star Questor, and the thought that Sheen was dead was terrifying to it.

“Sheen,” the computer called, using what was left of its sensors to search within itself for life signs. “Sheen… Sheen…. Sheen…”

But there was no answer. The bridge, which was part of the nose section was a tangled mess of crumpled structure, hull plates that had penetrated from outside, and an electrical fire that was now slowly burning itself out. There were no obvious life signs, but Rider's bridge sensors were as damaged as the rest of the systems there, and what they were telling him was difficult to decipher.

“Sheen,” the computer yelled, the volume on the bridge speakers turned up as far as it would go. “Sheen… Star Questor Sheen, report!” But there was no answer.

The story continues in the next episode - Episode 003: Welcome to the Jungle