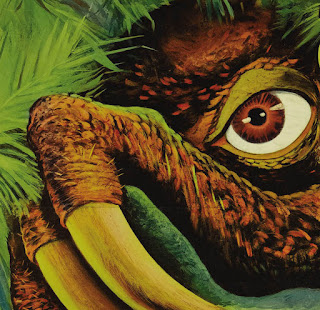 
Episode 003: Welcome to the Jungle


Consciousness returned to Star Questor Sheen very slowly, first noises of crackling fire and the pop of heated metal, then smells of smoke and ionized air, then sight. He saw the gloomy, unlit interior of the bridge of his spaceship, the Dark Rider. Then he felt the hard, uncomfortable surface of the bridge’s deck plating below him.

“Rider,” he called out, trying to attract the attention of the ship’s computer, and his own voice surprised him with how weak it was. It was little more than a dry croak. “Rider,” he called again, a little stronger, a little louder, and the AI heard him.

“Sheen, you’re alive,” Rider said. “I was certain that the crash had killed you.”

“I'm not completely certain it didn't,” Sheen said, as he climbed to his feet. A ceiling panel and some cables had fallen on him and they slid off as he got up.

The bridge had always been a twinkling constellation of blinking lights and floating hologram screens full of data before, but not now. He was aghast to see that the systems of the bridge were dark and inert. He saw himself reflected in one of the bridge's screens. Where once there had been constantly updating streams of information, now there was just a rectangular slab of black plastic, with his reflection in it. He was for the most part his usual self, a man of slightly over average height, build athletic without being overtly muscular, skin a light shade of brown, black hair shaggy and with a slight curl to it, features symmetrical, and brown eyes, though these were lost in dark pits of shadow.

The view was dim, and there was a lot of detail that was difficult to pick out, but he saw that his uniform was ripped across the front and across the arm, slashed by close contact with jagged metal, and that red blood slicked the skin of his chest. He suddenly realized that was only visible in the screen because a shaft of light was falling on him, but leaving the rest of the bridge in darkness. He suddenly wondered where the light was coming from, and he tore his eyes from his reflection and glanced around.

Immediately he noticed an area of damage to the bridge wall where there was a deep gash, and he could see through torn structure and hull, right out to a strip of bright light that he assumed was coming from outside the ship.

“The hull is breached,” Sheen said.

“Yes,” Rider replied. “My ability to repair the damage is offline, and even if it wasn't, it would take some time to close a gaping hole like the one you are presently gazing at.”

“So the local atmosphere has gotten in here?”

Sheen glanced at his reflection in the inert bridge screen again, as if to make sure of something that had just occurred to him, and he nodded slightly as he saw that he was right.

“So,” Sheen said, “I guess that means the local atmosphere is breathable.”

“It seems that way,” Rider agreed. “The local atmospheric mix of gases has been mingling with the ship's interior environment the whole time you were unconscious. I think we can assume they are breathable.”

“How long was I unconscious?” Sheen asked.

“Not long,” Rider told him. “It was less than twenty minutes.”

Sheen grimaced at that. It seemed to him that twenty minutes of unconsciousness was a very long time.

“Is that the only hull breach?” he asked.

“No,” Ryder told him. “There are several more, of various sizes, but that is a particularly big and impressive one.”

Sheen reached up to his head, where a throbbing ache was starting to impinge on his consciousness. He gasped in pain as his fingertips made contact with a deep wound. He pulled his hand away, and he saw his fingertips were wet.

“Can you scan me, Rider?” Sheen said. “To make sure I'm not bleeding to death.”

“My bridge scanners have suffered substantial damage,” Rider told him. “I can't trust what they are telling me. For example, the sensors say that there are two life forms on the bridge, not just one.”

Sheen was still gazing at the slash of bright light coming in through the breach in the hull, and he saw a shadow move against it. Graceful and large, moving on four legs, or maybe more, and then the shape was gone again as quickly as it had appeared.

“Powers,” he cursed. “There's something in here. There's an alien lifeform on the ship.”

“That would explain the readings,” Rider said, “but I am having trouble localizing them.”

“By the powers,” Sheen cursed again, as he fumbled with his blaster, trying to draw it from its holster at his hip.

Then he saw the creature again, quite clearly this time, and it was a beast he had never seen before. It was not some type of dog, rat, or cockroach, the usual creatures that followed humanity everywhere they went, like some kind of reminder of the mythic, lost, origin planet. This was something alien, probably unique to the tiny, insignificant forest moon he had crashed on. It was big, and he could see muscle mass bulging below a covering of scales, interspersed here and there with a downy covering of protofeathers. He saw that at the front, the business end of the beast, the part pointed at him, there were teeth, thick as chisels and angular as crystal, and there were four eyes, compound circles, primitive, but good enough to see him, and a tongue tasting the air, undoubtedly detecting his blood on it. All this he saw in an instant, the fraction of a second allowed to him before the monster attacked.

The beast let out a piercing shriek, and Sheen froze, an involuntary reflex he could do nothing about, in the face of an animal cry calculated by millions of years of evolution to petrify its prey and freeze them in place. The creature jumped at him before he properly had the gun in his hand, and instantly its jaws were at his neck. He fired hastily, but missed, blowing a huge hole in one of the bridge's numerous view screens.

The story continues in the next episode - Episode 004: By the Throat