Star Questor - Episode 004: By the Throat 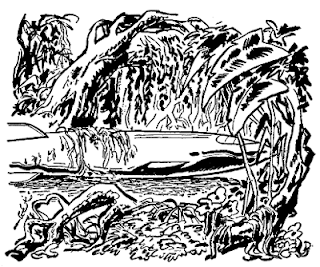 
Sheen could feel the hot breath of the creature on his neck, but instead of its teeth biting into his flesh, he felt only scratches and tears at the surface of the skin. The neck ring of his space suit, he realised, was saving him, for the moment at least. Instead of biting into his jugular vein, the monster had bitten down on the hard ring used to attach the helmet to his uniform. It wouldn't save him for long though. He could feel the metal buckling and pressing closer and tighter into his skin.

He pushed the muzzle of his blaster against the creature's chest and fired. The powerful weapon, at such close range, tore a hole in the beast, and his second and third shots sent it tumbling away from him to land on the decking of the bridge with a dull, lifeless thud.

After just a glimpse or two while it stalked him, he could now see the creature well. It was undoubtedly alien, but it was recognizably a predator, perhaps even the jungle moon's apex predator. It had a pattern of wide stripes, in orange, white and red, had four legs, a head with four compound eyes, and teeth and claws that were now stained with Star Questor Sheen’s own blood.

“By the powers,” Sheen gasped, “that was close.”

“You are seriously injured, in several places, Sheen,” the ship's computer told him.

“That's hardly surprising,” Sheen said, defensively, “I have just survived a spaceship crash, and being attacked by some kind of alien raptor.”

“You have lacerations to your chest, arm, throat, head, and legs,” Rider continued.

“Legs?” Sheen said, glancing down. “Oh yes, you're right. My legs are badly chewed up, too.”

“You should proceed immediately to sick bay,” Rider ordered him.

He left the bridge, via a door that was jammed open at an angle that spoke of a broken mechanism, and walked along a corridor where the ceiling was much lower than he remembered because the walls had been crumpled and compacted in the crash. They had been compressed so badly that several panels had popped off, trailing cables behind them, and were lying around the floor to trip him. Some smoke was coming from one of the gaping panels, and leaving a black stripe of soot as it rose to the buckled and bent ceiling. Sheen even had to crouch in a couple of places to duck under particularly badly crumpled sections of the corridor.

It was dark, with only emergency lighting, and only one in three of the emergency lights were still functioning. As Sheen picked his way toward sickbay, he noticed that he was climbing uphill, and guessed his ship had crashed nose down, with its tail in the air.

Then he saw a bright area of light, and realized he was approaching another place where the hull had been breached, allowing light from the moon's sun to enter. Remembering the raptor that had entered the ship through such a breach, and just tried to tear his throat out, he drew his blaster pistol and glanced at the charge in the capacitor. After firing just three shots, it was still registering a hundred percent capacity. Comforted by this, Sheen continued on to the bright area of light, up ahead.

This hull breach, he quickly realized as he got closer, was much bigger than the comparatively small gash in the bridge. The corridor he was walking along was broken in two, and the other end was yards away across a metal canyon.

The ship's back was broken. Both its nose and its tail were buried down in the rock of the planet, and the ship was torn open at the middle, where the two halves were now lying either side of a rocky ridge. “This is not good,” Sheen muttered.

“What is not good?” came the ship's computer's reply.

“Don't you know, Rider?” Sheen said, as he gazed down into a chasm of torn metal, with corridors and rooms broken open, their contents immodestly on display, on either side.

“My sensors are not operating at full capacity,” Rider said, and its words were truly pitiable. “The hull is broken clean in half,” Sheen told it, gently, as if giving bad news to a patient. “This was a very bad crash. I was lucky to survive.”

Sheen looked off to the side, out through the wide, gaping chasm in the structure of his spaceship, and saw that the mouth of the corridor he was standing in was high enough above ground that he was level with the tops of some of the local trees, the few that were still standing near the crash site. The ship was at the centre of a tangled carpet of fallen trees, knocked flat by the impact of the crash, but there was a wall of forest in the distance, beyond the edge of the blast radius. The treeline was close enough that he saw birds wheeling and heard animal calls.

“This is not good at all,” Sheen repeated to himself. “Sick bay is on the other side of this canyon. I don't see how I'll be able to get over go it.”

“I'm getting more sensors back online, and I’m starting to build a picture of the damage, Sheen,” the computer told him.

“It is,” Rider told him, some of its old confidence returning. “More of my systems are coming online all the time. I think I can plot a route to sickbay for you. The damage to the hull is worst in the dorsal area, and the ship is still mostly intact below you, in the ventral area.

“The back is cracked open,” Sheen said, “but the belly held together.”

None of the ship's elevators were operational, so Sheen took almost half an hour to reach sickbay, climbing down access ladders and crouching through broken corridors. Once he even had to turn back and retrace his steps when there was simply no way through one of the most badly crumpled areas.

At last, however, he made it to sickbay. He cleaned himself up, dressed his wounds, injected himself with a cocktail of painkillers and found a bed that hadn’t been too badly damaged, to lie down on.

Sickbay had a window that looked out over the forest, and he gazed at the alien and verdant scene. He thought he could see shapes moving among the fallen trees, or perhaps it was just the wind.

“Will the sickbay door keep out any more of those things,” Sheen asked.

“It will,” Rider assured him. “You are safe in here. You can rest.”

“Good,” Sheen said. With the shock wearing off and the painkillers kicking in, he felt very sleepy. “Oh, you have activated a distress beacon, right, Rider? How long before somebody comes to pick me up?” “About that,” Rider said. “There's a problem.”

“A problem?” Sheen said, already half asleep and only faintly registering the AI's words.

“Yes,” Rider said. “I am unable to activate a distress beacon, and your mission was secret. Nobody knows we are here. There will be no rescue.”

Sheen’s only answer was a strangled groan of despair before the medication took him and his eyes fluttered shut.

The story continues in the next episode - Episode 005: Visitor